WASHINGTON (AP) — Key Republican lawmakers, including 2012 presidential nominee Mitt Romney, on Friday slammed President Donald Trump’s unsubstantiated claim that Democrats are trying to “steal” the election, even as GOP leaders struck a more neutral tone — and others urged the White House to fight.

Romney, now a senator from Utah, said Trump was within his rights to request recounts and call for investigations where evidence of irregularities exists.

But Trump “is wrong to say the election was rigged, corrupt and stolen,″ Romney said on Twitter. Trump’s claim ”damages the cause of freedom here and around the world … and recklessly inflames destructive and dangerous passions,″ Romney said.

Romney’s comments came as GOP Sen. Pat Toomey of Pennsylvania — whose state is a key battleground in the presidential election, where votes are still being tallied — called Trump’s claim of fraud “very disturbing.”

“There’s simply no evidence anyone has shown me of any widespread corruption or fraud,” Toomey told “CBS This Morning.”

“The president’s speech last night was very disturbing to me because he made very, very serious allegations without any evidence to support it,” said Toomey.

While he voted for Trump, “I want the next president to be the person who legitimately wins the Electoral College and I will accept whoever that is,” Toomey said.

Trump, who has complained for weeks about mail-in ballots, escalated his allegations late Thursday, saying at the White House that the ballot-counting process is unfair and corrupt. Trump did not back up his claims with any details or evidence, and state and federal officials have not reported any instances of widespread voter fraud.

“Every legal vote should be counted,” McConnell tweeted early Friday. “All sides must get to observe the process.”

Here’s how this must work in our great country: Every legal vote should be counted. Any illegally-submitted ballots must not. All sides must get to observe the process. And the courts are here to apply the laws & resolve disputes.

McConnell grew testy during a press conference later in Kentucky when was repeatedly asked to say more. “Beyond that, I don’t have anything to say,” McConnell said. “It won’t make any difference how many times you ask I’ve already given my answer.”

“You can’t stop the count in one state and decide you want the count to continue in another state. That might be how you’d like to see the system work but that’s not how the system works,” Blunt said at the Capitol.

“So everyone who’s listening, do not be quiet, do not be silent about this. We cannot allow this to happen before our very eyes,” McCarthy, R-Calif., said Thursday on Fox News. “Join together and let’s stop this.”

The split showed the grip Trump still has on his party, particularly after Republicans in Congress won seats in the House and Senate running for reelection alongside the president.

One top Trump ally, Sen. Lindsey Graham, told reporters Friday that he supports Trump’s efforts to challenge ballot counts in several states yet to be called in the presidential race. The South Carolina Republican said he had talked to the Trump campaign and expects evidence of voting irregularities to surface in the next 48 hours, but added that it was up to the Trump campaign to make that case.

While he’s “not conceding” that Biden is going to win the presidency, Graham said he will try to work with a potential Democratic administration. “It’s important for me to be me, and that is, be a solid conservative, fight like hell for stopping a radical agenda for the conservative cause, but also recognizing that, if Biden does win, he’s president, and try to work with him when we can,” Graham said.

Other GOP senators, governors and other elected officials swiftly pushed back against Trump.

Maryland GOP Gov. Larry Hogan, a potential 2024 presidential hopeful who has often criticized the president, said unequivocally: “There is no defense for the President’s comments tonight undermining our Democratic process. America is counting the votes, and we must respect the results as we always have before.”

There is no defense for the President’s comments tonight undermining our Democratic process. America is counting the votes, and we must respect the results as we always have before. No election or person is more important than our Democracy. https://t.co/BOO2iaTsEf

Trump’s tweets on Thursday declaring victory and calling for officials to “STOP THE COUNT” were a test of how strongly he can keep Republicans in line as he tries to challenge the voting process in court.

Before Trump’s speech in the White House briefing room, several Republicans challenged his attempts to halt vote-counting in Pennsylvania and other battleground states.

Sen. Lisa Murkowski, R-Alaska, urged “everyone to be patient” as results come in. “It is critical that we give election officials time to complete their jobs, and that we ensure all lawfully cast ballots are allowed and counted,” she said in a statement.

As we await all the results of the election, I urge everyone to be patient. Each state has different deadlines to receive ballots and a process in place to count those ballots.

It is critical that we give election officials time to complete their jobs, and that we ensure all lawfully cast ballots are allowed and counted. The results will be known when all those ballots are counted.

Rep. Will Hurd, a Texas Republican who did not seek reelection, called Trump’s comments about corruption “dangerous” and “wrong.” Trump’s remarks undermine the U.S. political process and “the very foundation this nation was built upon,” Hurd said.

A sitting president undermining our political process & questioning the legality of the voices of countless Americans without evidence is not only dangerous & wrong, it undermines the very foundation this nation was built upon. Every American should have his or her vote counted.

While Biden was close Friday to the 270 Electoral College votes needed to win the White House, it was unclear when a national winner would be determined after a long, bitter campaign dominated by the coronavirus pandemic and its effects on Americans and the national economy. 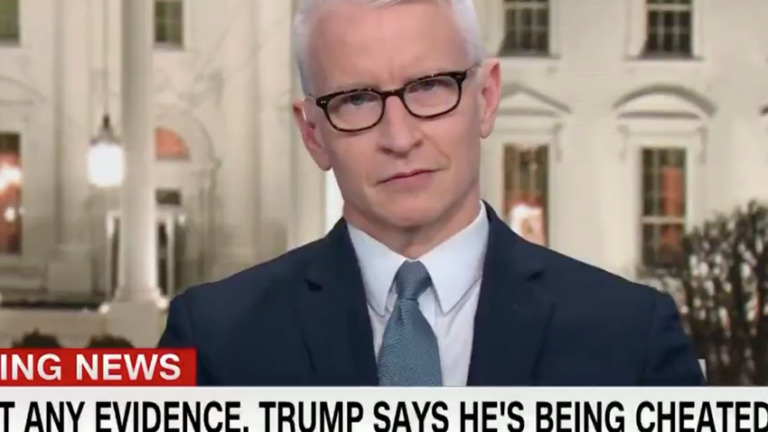