PHILADELPHIA – President Donald Trump’s refusal to accept the presidential election results is being reinforced in pockets of denial nationwide, but the anger continues to fall short of a coherent resistance movement that would threaten to overturn the vote.

In states where Trump won and here in one where he lost a close race, elected Republicans and GOP voters called for the continuation of efforts to challenge the results, which in Pennsylvania give President-elect Joe Biden a roughly 45,000-vote margin of victory.

Small clusters of Trump supporters gathered on several Philadelphia street corners Sunday to condemn a vote-counting process in which the president lost an early lead to Biden over several agonizing days. No evidence of improper counting procedures or any type of voter fraud has been presented.

“If he won and you want to go communist, knock yourself out,” said Joe Mullica, 56, a truck driver who grew up in south Philadelphia and demonstrated with a handful of others. “But when you consider Trump increased the Black vote, the Hispanic vote and yet you’re gonna tell me Biden won more than Obama? Hello? That don’t send up red flags?”

The flashes of defiance on the streets reflected the larger one at 1600 Pennsylvania Avenue, where Trump continued to insist, without evidence, that Biden and the Democratic Party stole the election.

At five days, the lag between Election Day, on Nov. 3, and a result was not close to the longest in U.S. history. But the delay did represent perhaps the most perplexing one, based less on proof than petulance.

By the end of Sunday, all but four states had been called, leaving Biden and his running mate, Sen. Kamala Harris of California, with nine more than the 270 electoral votes needed to secure the presidency. But Trump allies have kept up questions primarily about the counts in Arizona and Georgia, both uncalled, and here in Pennsylvania.

There appeared this weekend to be no centralized effort — at the White House or elsewhere — to bring together scattered Republican protests in an effort to reverse the results in Trump’s favor. On a conference call with allies Saturday, Trump campaign manager Bill Stepien said the campaign may be “propping up” rallies, protests and other events in upcoming weeks.

Bill Whalen, a political analyst at Stanford University’s conservative Hoover Institution, compared a legal challenge based on what he has seen and heard so far to the band-already-on-the-field kickoff return that won the game for the University of California at Berkeley over Stanford in 1982.

“It would be a once-in-a-lifetime coincidence of events – in other words, Trump is going to lose,” Whalen said. “The president will run out of legal options and the election will go to Joe Biden. Eventually, there will be a Barry Goldwater moment.”

Whalen was referring to a meeting in 1974 when President Richard Nixon was trying to stave off impeachment over the fallout from the Watergate break-in. Goldwater, a leading Republican senator from Arizona, told him he did not have support in the chamber to save his presidency.

Whalen said Trump will probably receive the same message regarding support within his party.

“Until then, Biden will begin making daily policy announcements and appointments,” Whalen said, “and we will forget all about this.”

“The 2000 election stretched into mid-December before it was conceded,” Whalen continued. “And today, the republic still stands. The only damage done by these kinds of challenges is in the short term, not the long term.”

But some Republicans said Sunday that the president has a case to make in some close-run states and showcase an issue – voter fraud – that the party has attempted to elevate into a national issue for several election cycles. There has been little proof of its existence.

He pointed to Pennsylvania, Georgia, Wisconsin and Nevada, where Republicans have alleged that more than 3,000 voters who do not live in the state cast their ballots there.

“If anything, this latest election has once again raised the profile of the issue,” Kobach said. “It’s a perennial problem.”

Most of the Republican legal efforts have been small-scale and thrown out by judges. In Nevada, a federal judge rejected Republicans’ request to intervene in ballot counting in Clark County, which includes Las Vegas. Judges in Georgia and Michigan quickly dismissed Trump campaign lawsuits last week. Supreme Court Justice Samuel A. Alito Jr. ordered Pennsylvania counties to comply with state guidance to keep late-arriving ballots separate, but did not direct officials to stop counting ballots as Republicans requested.

The GOP defiance and frustration about the still-emerging results faded in some parts of the country Sunday, as arguments against accepting the vote moved from the streets to social media.

Hundreds of Trump supporters had descended upon the steps of the Minnesota Capitol in St. Paul and later in front of the governor’s mansion last week, waving Trump flags and bearing signs alleging widespread voter fraud, despite there being evidence of none. On Sunday, the scene was silent.

In nearby Anoka County, a conservative-leaning suburb about 20 minutes north of Minneapolis where neighborhood streets had been dotted with Trump campaign signs as late as Saturday morning, many of those signs had been removed.

Most of the criticism came from prominent Republicans in a state the president believed he could win but did not.

On Thursday night, Jennifer Carnahan, the chairman of the Minnesota GOP, held a private Zoom call with party activists where she said Republican National Committee Chairman Ronna McDaniel had asked her to rally other Republicans to back the president’s claims of voter fraud.

She cited “the looseness of the election laws,” among other issues.

“In regards to the fraud and the concern that the president’s campaign is feeling around the country, another thing that Ronna had said on the call today is she asked us as chairs: ‘Can you get your other leaders in the state to start coming out and speaking about this?’ ” Carnahan said, according to audio posted by the Minnesota Reformer, which had a reporter on the call.

“Because it can’t just be the state party chair, right? It can’t just be me saying, ‘Hey, we have concern of the validity of some of this stuff.’ . . . So I’m gonna be making calls tomorrow to all of our leaders asking us to be a voice,” she said.

An RNC spokesman did not return a request for comment.

After Carnahan’s call, several other Minnesota Republicans spoke out about the election, including her husband, Rep. Jim Hagedorn, who represents the state’s 1st Congressional District. In a Facebook post, he described an “eerily exact emerging pattern” in how votes were being handled and processed in “Democrat-run battleground states” that he described as “suspicious.”

“What makes this all the more suspicious is that in each case the tabulation process has taken an extremely long period of time and the new votes have always helped Joe Biden close the gap or move ahead,” Hagedorn wrote. “And so far, once Biden has finally pulled ahead, the voting is miraculously complete. Biden never comes up short! What are the odds of that?”

On Friday, Rep. Tom Emmer, who represents the state’s 6th Congressional District and is also chairman of the National Republican Congressional Committee, called for a “thorough investigation” of Trump’s claims.

“All Americans can agree that only legal ballots should be counted,” Emmer said in the statement. “Allegations of fraud deserve a complete and thorough investigation. Our nation is stronger when we work together to root out fraud and protect our Democratic process and the right of every American to have their vote counted.”

In Michigan, which Trump won in 2016 and lost this year, a spokesman for the Michigan Republican Party said Sunday that an effort was underway to identify witnesses to voter fraud and affidavits attesting to them. Biden won the state by a little more than two percentage points.

National and state Republican leaders have claimed that there were multiple problems in the state, including in Antrim County, which was initially awarded to Biden but was reversed after what officials called a software updating glitch. Over the weekend, Republican leaders of the state’s House and Senate oversight committees subpoenaed voting-related documents from the Michigan Department of State.

“President Trump won more than 70 million votes and we owe it to those voters to make sure it was a fair election,” Tony Zammit, the Michigan Republican Party’s communications director, said in an interview Sunday.

Republican officials, including McDaniel, made unsubstantiated allegations that ballots were missing in Rochester Hills, Mich — something the City Clerk Tina Barton said was a egregious misrepresentation of a technical error that was quickly fixed.

“As a Republican, I am disturbed that this is intentionally being mischaracterized to undermine the election process,” Barton said in a statement.

In Georgia, which has yet to be called for either candidate, Democrats have greeted Republican claims that they would be filing lawsuits in a dozen counties with skepticism, even as a recount is expected to proceed.

On Thursday, a judge in Chatham County dismissed a lawsuit filed by the Trump campaign and the Georgia Republican Party claiming that Republican observers had seen a woman mix 50 ballots into a stack of uncounted absentee ballots.

In Pennsylvania, state Senate Majority Leader Jake Corman, R, who has been critical of election officials and the state’s Democratic governor, described a variety of concerns. No evidence of voter fraud has surfaced.

Corman pointed to issues regarding discrepancies in poll watching at early voting sites, signature verification for absentee ballots and the availability of provisional ballots — all of which, he alleged, may have helped swing the vote in favor of Democrats.

“We’ll have to find out if there was actual fraud. It’s all anecdotal, but it gives the appearance there’s a problem.”

“The last thing we want is to not have a clear winner,” he continued, “and now you’re going to have three million-plus people in Pennsylvania not accept the vote because they believe there was some underhanded activity.”

Klemko reported from Philadelphia; Gowen from Lawrence, Kan.; Bailey from Minneapolis; and Wilson from Santa Barbara, Calif. Kayla Ruble contributed to this report from Detroit. 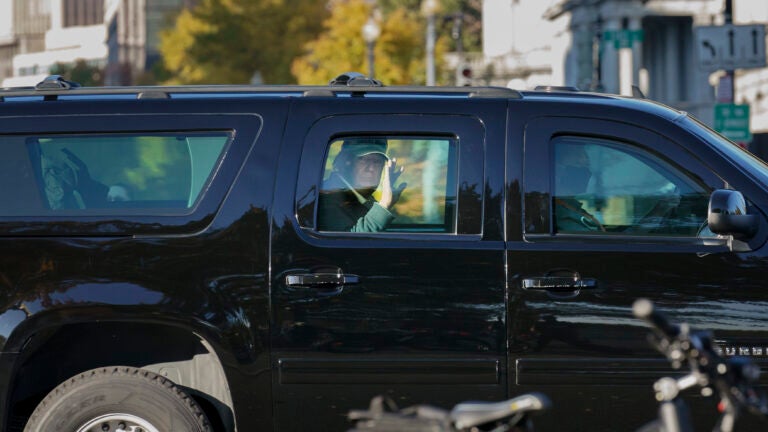