The Massachusetts Republican Party is standing firm behind President Donald Trump’s baseless accusations that the presidential election was marred by voter fraud, even as Republican Gov. Charlie Baker says Trump’s claims are not supported by evidence.

Mountain said he anticipates the U.S. Supreme Court will have to take up the matter.

“We’re expecting them to do the right thing and the right thing is to declare that many, many of those so-called ballots — those illegal votes — will be discounted,” Mountain told the news station.

Yet on Friday, as Trump sowed suspicion around the then-undetermined outcome of the election, Baker disavowed the president’s remarks that suggest there’s a conspiracy against him.

“I think the president’s comments that there’s some national conspiracy around this aren’t supported by any of the facts and they are damaging to democracy,” Baker told reporters. “They cheapen all of us who serve in public life and who ran and who were either elected or defeated based on the will of the people.”

The governor highlighted that votes were counted on “a bipartisan basis” and pointed to the divided branches of government between Democrats and Republicans in key states such as Pennsylvania and Arizona. Every vote should be counted, Baker said.

“I think suggesting that this is somehow a conspiracy is just bad for democracy and cheapens all the work and all the effort that so many people took to make sure that they voted and that they would be able to believe that their vote mattered and (was) counted,” Baker said.

Meanwhile, on Thursday, Jim Lyons, chairman of the Mass. GOP, sent out a fundraising message that read, “it looks like the radical Democrats are threatening to STEAL this election,” CommonWealth magazine reports.

Lyons backed a claim pushed by Trump that nearly 140,000 votes “found” in Michigan were awarded to Biden, which was ultimately debunked. Lyons pointed to similar alleged instances in Pennsylvania, Georgia, and Wisconsin.

“It’s suspicious that they never seem to find extra boxes of Republican ballots, isn’t it?” he asked.

Mountain, speaking to NBC 10 Boston on Saturday, said he will only accept the outcome of the election if the Supreme Court takes up a case.

Since Election Day, the Trump campaign has filed multiple lawsuits in several states and the president vowed over the weekend to continue to seek legal recourse Monday. Most filings have faced or are expected to face significant challenges.

On Friday, Baker pointed to another storyline of the contentious election — one that he thinks had gone under-appreciated.

“I haven’t heard anybody say much at all about the fact, but we had the highest participation rate in our nation’s history in this election,” the governor. “We should be celebrating this. People took it seriously. They came out and they voted. That’s a good thing.” 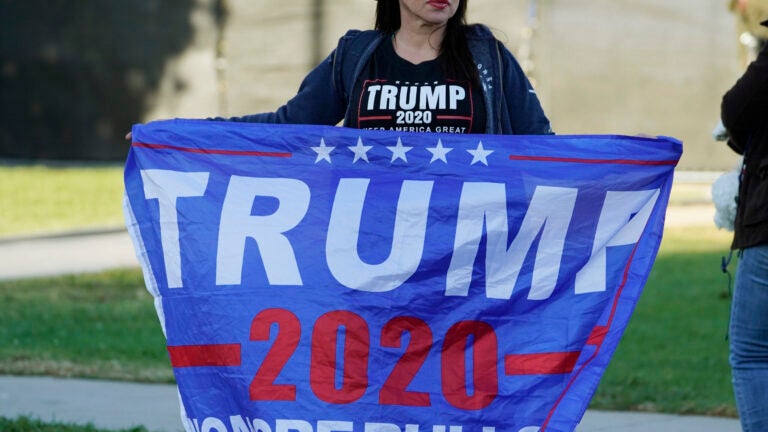 Trump, who never admits defeat, mulls how to keep up fight