The reactions from New England politicians over the outcome of the 2020 General Election have ranged from celebratory to cautious, and everything in between.

And as news spreads of President-elect Joe Biden and Vice-President-elect Kamala Harris’ victory, as well as President Donald Trump’s reportedly baseless claims of election fraud, multiple political figures have offered their thoughts on the topics.

Sen. Susan Collins wished Biden “every success” over Twitter Monday, and noted that he and Harris “should be given every opportunity to ensure that they are ready to govern on January 20th.”

The Maine Republican, who was reelected to her 5th term last week after running against Democrat Sara Gideon, also supported Trump’s right to challenge the election’s results.

“I understand that the President and others have questions about the results in certain states,” Collins said. “There is a process in place to challenge those results and, consistent with that process, the President should be afforded the opportunity to do so.”

Collins didn’t speak to comments Trump made late last week about the election being “rigged,” but instead urged patience.

“I know that many are eager to have certainty right now. While we have a clear direction, we should continue to respect that process,” she said. “The process has not failed our country in more than 200 years, and it is not going to fail our country this year.”

My statement on the 2020 Presidential election results: pic.twitter.com/8NY1WpaJpC

Former Maine senator Olympia Snowe, who is also a member of the Republican Party, congratulated the Biden-Harris ticket on their win as well.

“The President-elect’s speech reflects the opportunity we now have to heal our nation,” Snowe tweeted Sunday evening. “We can also celebrate the historic election of VP-elect Kamala Harris who has proven there are no boundaries to what is possible for all women.”

Congratulations to @JoeBiden and @KamalaHarris. The President-elect’s speech reflects the opportunity we now have to heal our nation. We can also celebrate the historic election of VP-elect Kamala Harris who has proven there are no boundaries to what is possible for all women.

Back in Mass., former Republican leader of the state Senate Richard Tisei told WBUR that he believes Trump’s concerns about voter fraud can’t be ruled out, since this was the first election mail-in votes were so widely used.

And since so many mail-in ballots have favored Biden — something pundits had predicted, given that Trump had discouraged mail-in voting among his supporters — Tisei said it’s understandable that Trump supporters are suspicious.

“It’s really important for everyone to have confidence in the integrity of elections,” Tisei told the local station. “But when you have huge swaths of votes being added in the middle of the night, I think everyone can agree that the optics have been terrible.”

Utah Sen. Mitt Romney, the former governor of Massachusetts, echoed Tisei’s sentiment Monday on NBC’s Meet the Press, saying Trump should be able to take every legal avenue open to him.

“He has every right to call for recounts because we’re talking about a margin of 10,000 votes here, or less in some cases, and so a recount could change the outcome,” Romney told host Chuck Todd. “He wants to look at irregularities, pursue that in the court, but if, as expected, those things don’t change the outcome he will accept the inevitable.”

Beyond Trump’s push for a recount, though, the former Bay State governor said he was more concerned about the language Trump has used surrounding his allegations.

“I think when you say that the election was corrupt or stolen or rigged, that that’s unfortunately rhetoric that gets picked up by authoritarians around the world,” Romney told the station. “And I think it also discourages confidence in our democratic process here at home.”

This type of language he added, could encourage a course of history that would be “very very unfortunate.”

ICYMI: Sen. @MittRomney says Pres. Trump “has every right to call for recounts” but he should be careful with his “choice of words.” #MTP

Romney: “When you say that the election was corrupt or stolen or rigged … that gets picked up by authoritarians around the world.” pic.twitter.com/75O4BvweOk 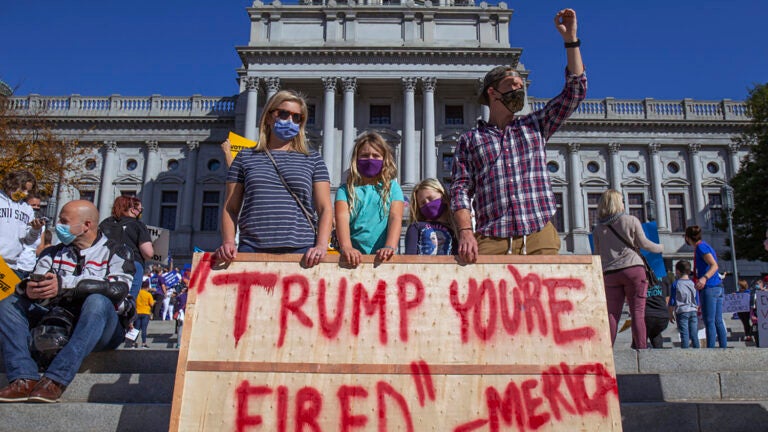