Did Cindy McCain help Joe Biden win Arizona in the 2020 presidential election? Probably. Did President Donald Trump’s obsession with John McCain play into his loss of the state? Probably.

When historians write about 2020 politics, Arizona will get a star turn — first, for the Fox News election-night call, a move that enraged Trump and devastated his supporters. But perhaps more significant was the role of McCain, the matriarch of Arizona Republicans who endorsed Biden. It was the first time in her life she had voted for a Democrat, and she’s finally opening up about why.

“I knew I had to get involved, I knew I had enough,” she said hours after the state’s 11 electoral votes were called for Biden last week. “And the final blow was with the ‘losers and suckers’ thing.”

For five years, McCain maintained a dignified silence when it came to Trump — despite his attacks on her late husband, despite the tweets and the insults after his death, despite the bile from the MAGA crowds. As a lifelong Republican, she held her tongue for the good of her family, the good of her party and her belief in civility and sacrifice.

When McCain appeared in a video at August’s virtual Democratic National Convention, she celebrated the bipartisan friendship of her late husband and Biden, but did not explicitly endorse the Democratic nominee. That changed just weeks later after Trump’s dismissive comments about fallen soldiers (which he denied saying) became public. If the words shocked most Americans, they outraged military families — especially McCain, who married a former POW and who has three family members still serving.

“I thought, ‘My God, how could somebody say something like this about our young people who are willing to fight and die for this country without being asked?’ ” she said. “And somehow he thought that they were losers and suckers. And I’d listened to the rants against the Gold Star families, and each blow was a little worse than the last. That was all it took for me.”

So she approached Biden’s team, who were understandably thrilled to have her on board. She’s one of the most influential women in Republican politics and brought a perspective on Biden as a man and colleague: What he feels, what he believes in, why he would make a good president.

“He’s a remarkable man in that respect,” she explained. “And he’s always been that way. He and my husband didn’t really agree on many things, but they worked together and both of them always did what was good for the country. Those qualities were first and foremost in my mind: Joe has great empathy, he has great leadership skills, he abhors incivility. He’s just someone who really believes in what’s so great about this country.”

Besides her personal regard for Biden, she brought the belief that this White House was damaging America’s reputation around the world. Before the pandemic grounded her, McCain’s charitable and advocacy work took her to countries where she found it increasingly difficult to defend this administration.

“I was overseas at least once a month, if not more,” she said. “I’d watch the demise of respect of our country around the globe, watch us leave our allies on the battlefield, watch us throw away our treaties, etc. You say, ‘Well, we’re better than that.’ But finally, there comes a time when there’s no explanation anymore, and that was very much the case with me. There were so many people like my husband and so many millions of other people who served so nobly. And then to have it tossed away by someone who I don’t believe really understands what it means to serve.”

Her endorsement of Biden brought a predictable tweet from the president: “I hardly know Cindy McCain other than having put her on a Committee at her husband’s request. Joe Biden was John McCain’s lapdog. So many BAD decisions on Endless Wars & the V.A., which I brought from a horror show to HIGH APPROVAL. Never a fan of John. Cindy can have Sleepy Joe!”

The New York Times reported that aides begged the president to stop the attacks. He could not, and even Democrats who never voted for her husband were offended on his behalf. “As a Democrat born and raised in Arizona, I didn’t always agree with McCain’s views, but I respected him because he was a decent man who cared about the American people. He made Arizona proud and I wish more Republicans had just an ounce of his class,” tweeted one after the election.

Cindy McCain said a lot of people told her something similar, although she doesn’t know what impact Trump’s obsession had on Arizona’s vote: “It probably didn’t help. I need to be clear that when John was alive, when a lot of this was going on, he laughed it off as something that was just ridiculous.”

It was harder for her to laugh it off, but it furthered her resolve. She targeted her efforts at conservative suburban women, of all generations and all ethnicities, and told them why a Republican could step across the aisle and vote for a Democrat this year. It is women, she believed, who were most impacted by the pandemic and the bungled response: If not grappling with the illness themselves, they were protecting elderly parents, handling kids stuck at home, or missing far-flung children and grandchildren.

“I think I speak for many, many Americans and especially women in this: I didn’t feel that our president was taking care of our country with regards to the pandemic,” she said. “There was no working with the scientists. He turned it political.”

As it turned out, Arizona was listening. Joe Garcia, the executive director of Chicanos Por La Causa Action Fund in Phoenix, told The Washington Post that Cindy’s endorsement “really hurt Trump,” and former John McCain aide Max Fose said Cindy “made it OK for Republicans to vote for Joe Biden.”

The state has changed over the last decade — it’s younger, more diverse, more moderate. “They’re not playing a party game. And I’m not suggesting that’s a bad thing,” she said. “They’re not necessarily going for party politics as they are for the person.” The reliably red state, with a Republican governor — but soon with two Democratic senators, given Mark Kelly’s victory — may not be blue, but purple.

McCain is bringing that same sensibility to Biden’s transition team, where she hopes to advise on women and children’s issues — and see a few Republicans join a Biden White House.

“I’m putting together great names of people that I want to or I would think would be good for the administration,” she explained. “My job is to help bring Republicans into the fold and offer up some great opportunities for people that are really good at what they do. I think that’s going to be really remarkable.”

After Arizona was called for Biden, McCain publicly congratulated the president-elect and told “Good Morning America” she hoped Trump would concede “in a gracious manner,” as her husband had when he lost in 2008.

But her outspoken daughter Meghan, over Twitter, couldn’t resist a final jab at Trump: A photo of her smiling dad and the caption “I like people who don’t lose Arizona.” 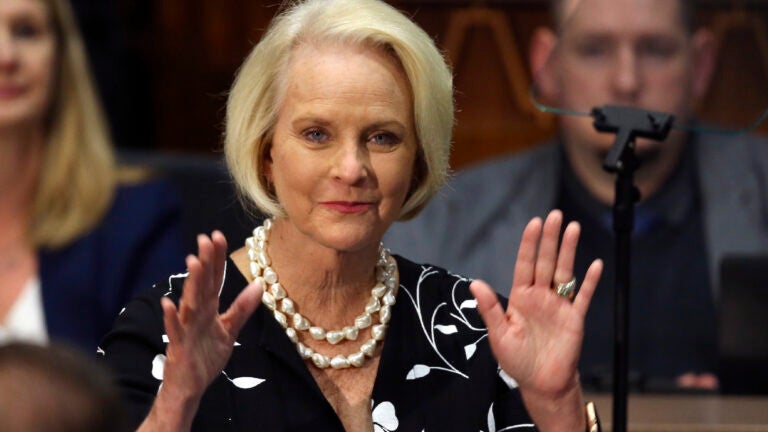 Cindy McCain endorses Biden for president in rebuke of Trump