In his first interview after President Donald Trump fired him from his post leading the Department of Homeland Security’s effort to help to secure the election, Christopher Krebs reaffirmed on Sunday that there was no evidence of voter fraud and the integrity of the election had not been compromised.

Trump vehemently disagreed, turning to his Twitter feed late Sunday to excoriate Krebs and the news program, and reassert his unfounded claims that the election he lost was “probably our least secure EVER!”

“NO WAY WE LOST THIS ELECTION!” tweeted Trump, again without evidence, in another claim marked as “disputed” on Twitter.

Krebs, a Republican who joined DHS in 2017 as a senior counselor to then-Secretary John Kelly, was confirmed in 2018 as undersecretary for the National Protection and Programs Directorate, later rebranded to the Cybersecurity and Infrastructure Security Agency (CISA).

Krebs seemingly fell out of Trump’s good graces earlier this month when CISA released a joint statement with the coordinating council of state and local federal government entities in charge of protecting elections that rejected the president’s claims and called the election “the most secure in American history.”

Five days later, on Nov. 17, Krebs, like many other government officials over the past four years, learned he was terminated from one of the president’s tweets.

During his interview with “60 Minutes,” Krebs spoke frankly about the effect the president’s rhetoric has had on state elections officials. He specifically mentioned secretaries of state in Pennsylvania, Michigan, Nevada and Arizona, all women, who are “under attack from all sides, and they’re defending democracy,” Krebs said.

“The American people should have 100% confidence in their vote,” he added.

Much of the segment focused on Krebs’s desire to reassure the public that election was secure, telling Pelley that his department had spent more than three years preparing for every possible scenario of meddling from a foreign adversary. Specifically hoping to avoid a repeat of Russia’s interference in the 2016 election, one of the key measures was the use of paper ballots, he said.

“Paper ballots give you the ability to audit, to go back and check the tape and make sure that you got the count right,” Krebs said. “And that’s really one of the keys to success for a secure 2020 election. Ninety-five percent of the ballots cast in the 2020 election had a paper record associated with it. Compared to 2016, about 82 percent.”

The paper ballots also helped prove that the votes in Georgia were not hacked by a “malicious algorithm,” he said. Trump’s demand for a hand recount further proved Krebs’s point, showing that the votes that were tabulated by machines were consistent with the hand recount results.

Krebs said those results definitively debunk the president’s false claims that election vendors were hacked and their software and systems were compromised.

The Trump campaign did not immediately respond to a request for comment.

At one point, the interview got more personal when Pelley asked Krebs about his sudden ousting. Krebs said that while he was not surprised by the president’s move to fire him, he was disappointed in how it all unfolded.

“It’s not how I wanted to go out,” he said, dolefully. “I love that team. And I didn’t get a chance to say goodbye, so that’s what I’m most upset about.”

The former government official also expressed his worries that the actions by Trump and personal attorney Rudolph W. Giuliani were undermining the democratic process. Giuliani has held several news conferences spewing conspiracy theories. On Sunday morning, Trump spoke to Maria Bartiromo on Fox News’s “Sunday Morning Futures,” unchallenged for 45 minutes about his unfounded claims of the election being “rigged” and “a fraud.”

For Krebs, he worries these actions could cause irreparable harm.

“What it was actively doing was undermining democracy,” Krebs said. “And that’s dangerous.” 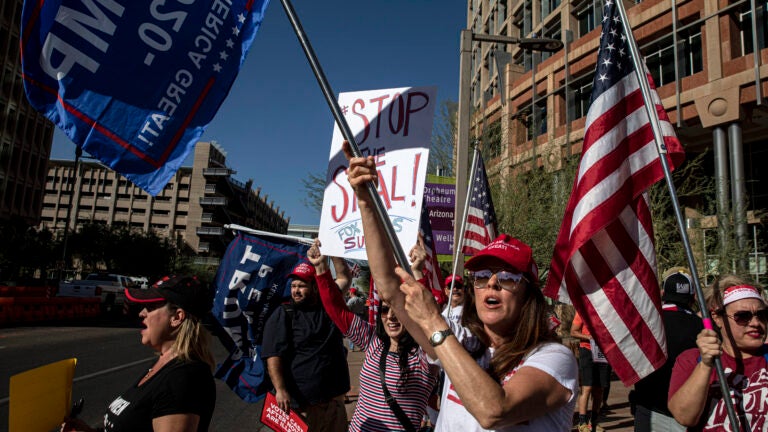 Most Republicans say they doubt the election. How many really mean it?