As Massachusetts braces for another surge in coronavirus cases and state officials roll back reopening guidance, Gov. Charlie Baker’s approval over how he’s handled the health crisis has slipped from earlier this year, a recent poll shows.

But that’s not to say the Republican governor isn’t popular.

Of 500 respondents polled in the Bay State between Dec. 7 and Dec. 10, 71.8 percent said they approve of how the state’s chief executive has handled the COVID-19 outbreak, and 56.8 percent said they believe Baker has “found the right balance” when it comes to being either too lenient or too strict on coronavirus-related shutdown measures. (Pollsters noted the survey had a +/- 4.4 percent margin of error, with a 95 percent level of confidence.)

Yet, support for the governor’s decision making has slipped as the pandemic has rolled on.

The latest numbers are a drop from a Suffolk University poll conducted for several local media outlets in June, when Baker enjoyed a 81 percent approval rating for how he’s responded to the crisis, and 74 percent of respondents thought Baker hit the right balance in trying to stop virus spread. A mere 14 percent of respondents at the time indicated they disapproved of his approach.

Notably, the poll was conducted last week as Baker announced a rollback in the state’s reopening plan. As of Sunday, all cities and towns were ordered to revert to Phase 3, Step 1 of the plan, although some communities, including Boston, have since announced more drastic restrictions.

Critics have said Baker’s latest order doesn’t go far enough to meet the upswell of virus cases and deaths, particularly when it comes to not banning certain activities that medical experts say are higher risk, such as indoor dining.

Most of those polled, or 57.8 percent, indicated they believed Massachusetts is generally “heading in the right direction,” though that optimism has also waned since earlier this year, when as many as 71 percent shared that sentiment.

When it comes to the country as a whole, Massachusetts residents appear to not have as rosy an outlook.

Poll results show 53.2 percent of respondents think the United States is heading in the “wrong direction,” while 32.8 percent think the opposite, and 13.4 percent were undecided. 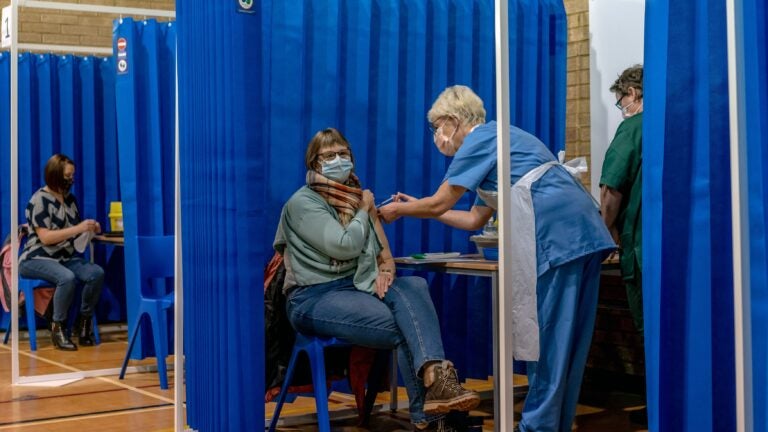