LITTLETON — Jim Lyons, a strong Trump supporter who has clashed repeatedly with Governor Charlie Baker, was narrowly re-elected Sunday as the state Republican Party’s chairman, earning a two-year term that will coincide with the 2022 gubernatorial election.

A Lyons victory could complicate a potential reelection bid by Baker, who has all but cut himself off from the Trump-aligned party apparatus where he and allies had once constructed a lucrative fundraising operation. While Dooley said he also voted for President Donald Trump, he argued he could bridge the gap between hard-line supporters of the president and more moderate Massachusetts Republicans.

Because of the coronavirus, the election was held in a parking lot outside an auto parts distribution center in an industrial park in Littleton. The business was co-founded by Rick Green, a one-time GOP congressional candidate who unsuccessfully ran for party chairman in 2013.

State committee members tuned their car radios to 105.1 FM to hear the candidates make their case. They were then called out of their cars, five people at a time, to deposit their ballots. When Lyons won, supporters honked their horns in lieu of applause as he promised to “make the Massachusetts Republican Party great again.”

“I should continue to bring conservative and pro-life voices into our party, to give conservatives a seat at the table for which too often in Massachusetts Republican politics [they] have been excluded in the past,” Lyons said in a speech before the vote. His opponents, he said, may be having a hard time accepting “new ways of doing things, of facing new reforms that upset the old apple cart, of respecting the new voices of conservatives, who have frequently been muffled or silenced.”

The vote comes on the heels of an election cycle — Lyons’s first as chairman — in which a deeply divided state GOP struggled to maintain its weak hold on elected offices.

It lost five of its 35 seats in the Legislature, where Republicans will begin the legislative session Wednesday with just three seats in the 40-member Senate. Republicans also failed to mount a serious challenge to the state’s all-Democratic congressional delegation in the November election.

Despite the losses, Lyons has said he’s sought to build the party by supporting “true fiscally conservative candidates” who back law enforcement and focus on keeping “middle-class families . . . prosperous and safe,” according to a video Lyons supporters have circulated.

“Jim is amazingly optimistic and positive about our potential for success,” said Amanda Orlando, a state committeewoman from Gloucester who supported Lyons. “It’s hard to run as a Republican in Massachusetts and you need to feel that the party is behind you, and Jim does that.”

Orlando, a member of the Massachusetts Republican Party’s state committee since 2017, pointed out that local Republican candidates who lost in November’s election managed to out-perform President Trump at the top of the ticket. Going forward, she said, she hoped the party could focus on supporting small businesses and law enforcement, and sway some independent voters who feel unmoored and in need of new leadership coming out of the coronavirus pandemic.

In winning in both 2014 and 2018, Baker’s political operations were closely entwined with the party apparatus, then led by Kirsten Hughes, a Baker ally whom he later tapped for a lifetime post as a court clerk magistrate.

But since 2019, Baker has been estranged from the MassGOP and was regularly at loggerheads with the Lyons, an Andover Republican and staunch ally of President Trump. The governor and party leadership have fought over a donor database, and Lyons in the spring criticized Baker’s handling of reopening of the state’s economy amid the pandemic.

Baker did not attend Sunday’s vote. However, Jim Conroy, Baker’s campaign manager, said the governor congratulates Lyons on his re-election.

”The governor’s focus has been on managing the commonwealth through the pandemic, and remains there,” Conroy said. “The governor and lieutenant governor will continue to do anything they can to continue electing Republicans to the legislature.”

The party has also been roiled by suggestions of impropriety. Lyons allowed the party’s lucrative fund-raising operation built under Baker to collapse. And in November, he asked the US attorney and the FBI, among other agencies, to investigate whether former employees and fund-raisers for the GOP — including Baker’s former finance director — misused more than $1 million in party funds. It’s unclear whether authorities have launched any such probes.

Meanwhile, the party’s federal fund-raising account was on pace for its worst cycle since 2008, according to data covering through mid-November. And its share of the electorate had dwindled to just 9.9 percent of all registered voters ahead of the November election. (Nearly 57 percent of the state’s 4.8 million voters aren’t enrolled with any party, but Democrats outnumber Republicans by roughly 3-1.)

Baker, a moderate Republican and Trump critic, has not said whether he’ll try in 2022 to win a third consecutive, four-year term, something no Massachusetts incumbent governor has ever done.

Dooley, of Norfolk, modeled himself as a chairman who could bring together a warring state party, saying it needed a “rebranding” and to scale back its attacks on the more moderate Baker.

Dooley, who is also a state committee member, has himself been critical at times of Baker, including in decrying the governor’s broad use of his emergency powers during the pandemic. But his campaign to oust Lyons aligned with frustrations within the state committee and among other Republicans, who felt the party had handicapped its ability to expand after aligning itself closely with President Trump in tone and substance, sometimes at the expense of Baker.

Trump for example directly attacked Baker in the fall as a “RINO” (Republican in name only) after the governor bucked the president’s months-long criticisms of mail-in balloting. The Massachusetts GOP later issued a statement backing Trump’s concerns, by citing local criticisms of a newly launched ballot application portal.

“It’s quite clear that the MassGOP needs a resurrection,” Susan Smiley, a state committee member and Lancaster Republican who unsuccessfully ran for an open House seat this year, told the Globe in November. 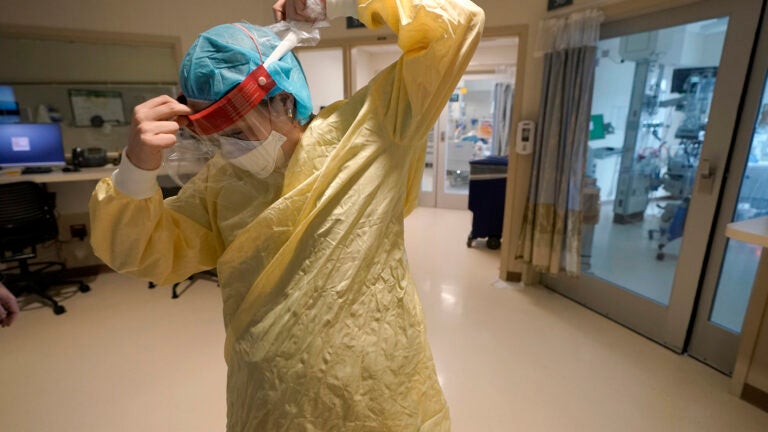 Mass. nurses union calls on Baker to declare a state of emergency over 'overrun' healthcare facilities