“An attack on America.”

Members of the Massachusetts delegation unequivocally condemned the riot by supporters of President Donald Trump that breached the Capitol Building as Congress began to certify the results of the 2020 presidential election Wednesday, overwhelming police and forcing lawmakers and staffers to evacuate.

The chaotic and unprecedented scenes unfolded after Trump addressed supporters near the White House, encouraging them to march to the Capitol and pledging to “never concede,” citing debunked claims of widespread voter fraud.

“This dark moment is the culmination of everything Trump has been promoting,” Rep. Katherine Clark, the assistant House speaker, tweeted. “Praying for an end of the violence and safety for everyone, and the preservation of our democracy. This must stop.”

This is an attack on America.

“We are being told to shelter in place not because of a foreign terrorist attack but because of a domestic coup attempt,” Rep. Seth Moulton wrote. “I expected this as a US Marine in Iraq. I never imagined it as a US Congressman in America.”

Donald J. Trump should immediately be impeached by the House of Representatives & removed from office by the United States Senate as soon as Congress reconvenes.

This is dangerous & unacceptable.

McGovern, who was the House’s presiding chair as Trump supporters broke windows and stormed inside the building, tweeted at the time that the chamber’s doors had been locked, shortly before Capitol Police began evacuating members and others to an undisclosed location. At one point, photos and videos from reporters on the House floor showed an armed standoff at the chamber doors.

Video from the chamber. pic.twitter.com/UKF7MScHKN

According to an aide, McGovern had instructed his entire staff to work from home Wednesday due to worries about security. Later in the afternoon, McGovern said that he was in a secure location.

“When the situation is under control, we will resume proceedings on the House Floor,” the Worcester Democrat wrote. “America’s democracy will never be deterred. Not today. Not ever.”

I am safe in a secure location. When the situation is under control, we will resume proceedings on the House Floor. America’s democracy will never be deterred. Not today. Not ever.

Markey, Trahan and, Rep. Richard Neal also tweeted that they were safely sheltering at the Capitol, as was Pressley, according to her chief of staff.

Earlier in the day, Moulton also put the blame squarely on Trump and the Republicans in Congress who entertained his desire to overturn the Electoral College results.

“This is an attempted coup,” Moulton tweeted. “And it’s happening in America because of lawless lawmakers. That they are colleagues makes me embarrassed and sad for our country.”

Moulton, who raised concerns that “sensitive or classified information” in Capitol offices could have been compromised during the chaos, added that the Republican lawmakers who incited the events should be “accountable to the law.”

It’s lawless Republican lawmakers inside the Capitol who inspired the domestic terrorists who stormed the building. Both should be held accountable to the law.

With the two chambers of Congress scheduled to reconvene to continue the count Wednesday night, some Massachusetts delegation members stressed the importance of moving on with certification.

“We cannot allow the actions of domestic terrorists to undermine the peaceful transition of power in our country,” Warren wrote.

We cannot allow the actions of domestic terrorists to undermine the peaceful transition of power in our country. Americans picked a new president who wants to save lives, save our economy, and save our democracy. The certification of this election must resume immediately.

It is even more important now to certify President-elect Biden and Vice President-elect Harris TONIGHT to send a clear message to Trump’s henchmen that Congress remains undaunted, that the votes of the American people will be counted and our Democracy is alive and well. 🇺🇸

This is a dark day for our democracy, but no mob will keep Congress from fulfilling its constitutional responsibility. We will certify @JoeBiden & @KamalaHarris as the next leaders of our country. pic.twitter.com/R9Bhi9AdAo

Auchincloss, the state’s newest member of Congress, posted a video saying that he was “more resolved than ever” to complete the proceedings.

“I’ll put on my old body armor for this vote if I have to,” the Marine veteran later wrote. 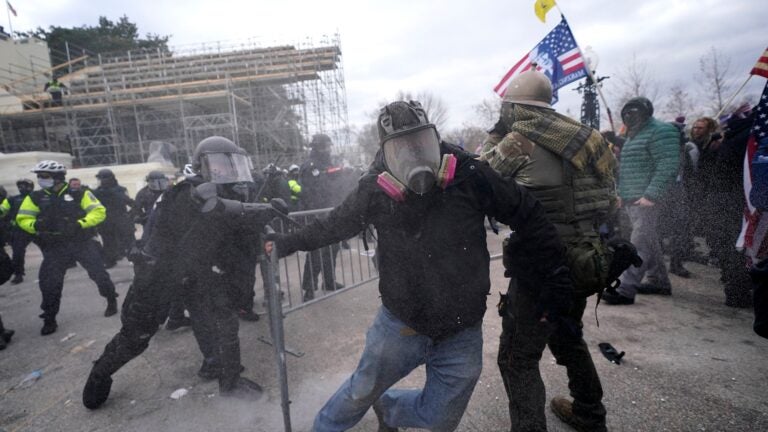