WASHINGTON — There were infamous white nationalists and noted conspiracy theorists who have spread dark visions of pedophile Satanists running the country. Others were more anonymous, people who had journeyed from Indiana and South Carolina to heed President Donald Trump’s call to show their support. One person, a West Virginia lawmaker, had only been elected to office in November.

All of them converged Wednesday on the grounds of the U.S. Capitol, where hundreds of rioters crashed through barricades, climbed through windows and walked through doors, wandering around the hallways with a sense of gleeful desecration, because, for a few breathtaking hours, they believed that they had displaced the very elites they said they hated.

“We wanted to show these politicians that it’s us who’s in charge, not them,” said a construction worker from Indianapolis, who is 40 and identified himself only as Aaron. He declined to give his last name, saying, “I’m not that dumb.”

He added: “We’ve got the strength.”

As the country sifts through the shards of what happened in Washington on Wednesday, what comes into focus in the storming of the Capitol is a jumbled constellation of hard-core Trump supporters: a largely white crowd, many of them armed with bats, shields and chemical spray; some carried Confederate flags and wore costumes inspired by QAnon memes; they were mostly men, but there were women, too.

Those who stormed the Capitol were just one slice of the thousands of Trump supporters who had descended on Washington to protest the certification of Joe Biden’s victory in November over Trump. Their breach came with a confused and frenzied energy, fueled by the words of Trump just minutes before and the fervor of the mob standing behind them.

Washington’s Metropolitan Police Department said it had made no additional arrests Thursday connected to the rioting, which led to at least four deaths, including one woman who was shot by the Capitol Police. A day earlier officers in the department detained 68 people, plus the 14 picked up by the Capitol Police during the unrest. Dozens more people were still being sought by federal authorities. Their number included a 60-year-old gun rights activist from Arkansas who was pictured sitting in Speaker Nancy Pelosi’s office, men in tactical gear taking selfies in the Rotunda and a woman in the House chamber, carrying a QAnon-inspired sign about children. 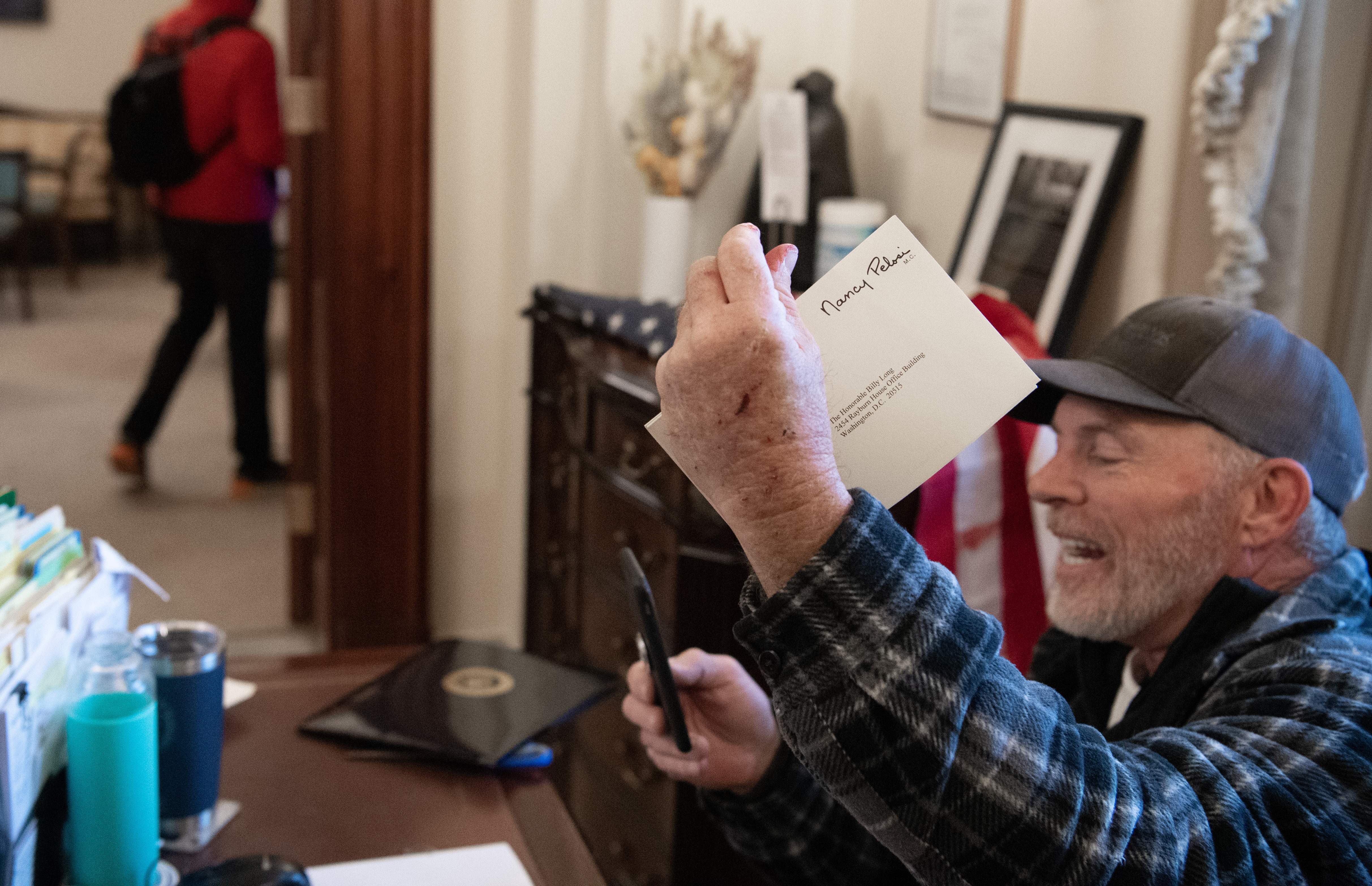 A supporter of President Donald Trump sits inside the office of Speaker of the House Nancy Pelosi inside the Capitol.

Some of those who had also surged forward in the crowd seemed to show a bewildered wonder at what they were seeing in front of them. A few remarked on the opulence of the Capitol building and offices, a quality that seemed to confirm their suspicions about the corruption of Washington.

“Yeah look at all this fancy furniture they have,” said a man in a winter parka and red hat, standing on the west side of the Capitol and peering through the glass at empty desks, computer screens and ergonomic chairs. Several people banged on the windows with their fists, including one man who shouted, “Put the coffee on!” One man hit his head, not seeing the outer layer of glass was there, it was so clean.

As people rushed inside, there was a strange mix of confusion and excitement, and the almost complete lack of police presence in the beginning amplified the feeling of lawlessness. They gawked at a place of wealth and beauty, adorned with art and marble, a domain of the powerful, and for a short while Wednesday afternoon, the rioters were in control. For once, they felt, they could not be ignored.

Aaron, the construction worker from Indianapolis, and his two friends had heard people talking about going to Pelosi’s office. So once inside they decided to instead find Sen. Chuck Schumer’s office. Both are Democrats.

“We wanted to have a few words” with Schumer, he said. “He’s probably the most corrupt guy up here. You don’t hear too much about him. But he’s slimy. You can just see it.”

But they could not find Schumer’s office. He said they asked a Capitol Police officer, who tried to direct them. But they appeared to have gotten nowhere near the minority’s leader’s office. They ended up smoking a few cigarettes inside the building — “We can smoke in our house,” Aaron said — and one of his friends, who would not give his name, joked that he had gone to the bathroom and not flushed.

A woman in a coat sat on the couch in a small room with a blue carpet and watched as a man ripped a scroll with Chinese lettering hanging on the wall.

Nearby, six men sat at a large wooden desk. A lamp with a white shade was knocked over and broken. Someone was smoking pot. “This is the pot room!” a young man said.

In the Crypt, people walked around taking photographs of the statues and themselves with their phones. One man had a selfie stick, like a tourist in a foreign land. A woman in baggy jeans and a blue puffer jacket was shouting chants into a megaphone, while a man in a black T-shirt that read “Not Today Liberal” ran around the central columns in what looked like a frenetic victory lap.

As authorities try to identify those in the mob, some will be less hard to pin down than others. The group included some well-known figures from the conspiratorial right, including Jake Angeli, who has pushed the false QAnon claims that Trump was elected to save the U.S. from deep-state bureaucrats and prominent Democrats who worship Satan and abuse children. He was pictured sitting in Congress in a viking helmet and furs. Angeli, who is known as the “Q Shaman,” has been a fixture in the pro-Trump protests in Arizona since the election, and there are indications that he and other right-wing activists had planned to spark a confrontation with authorities before Wednesday’s rally. 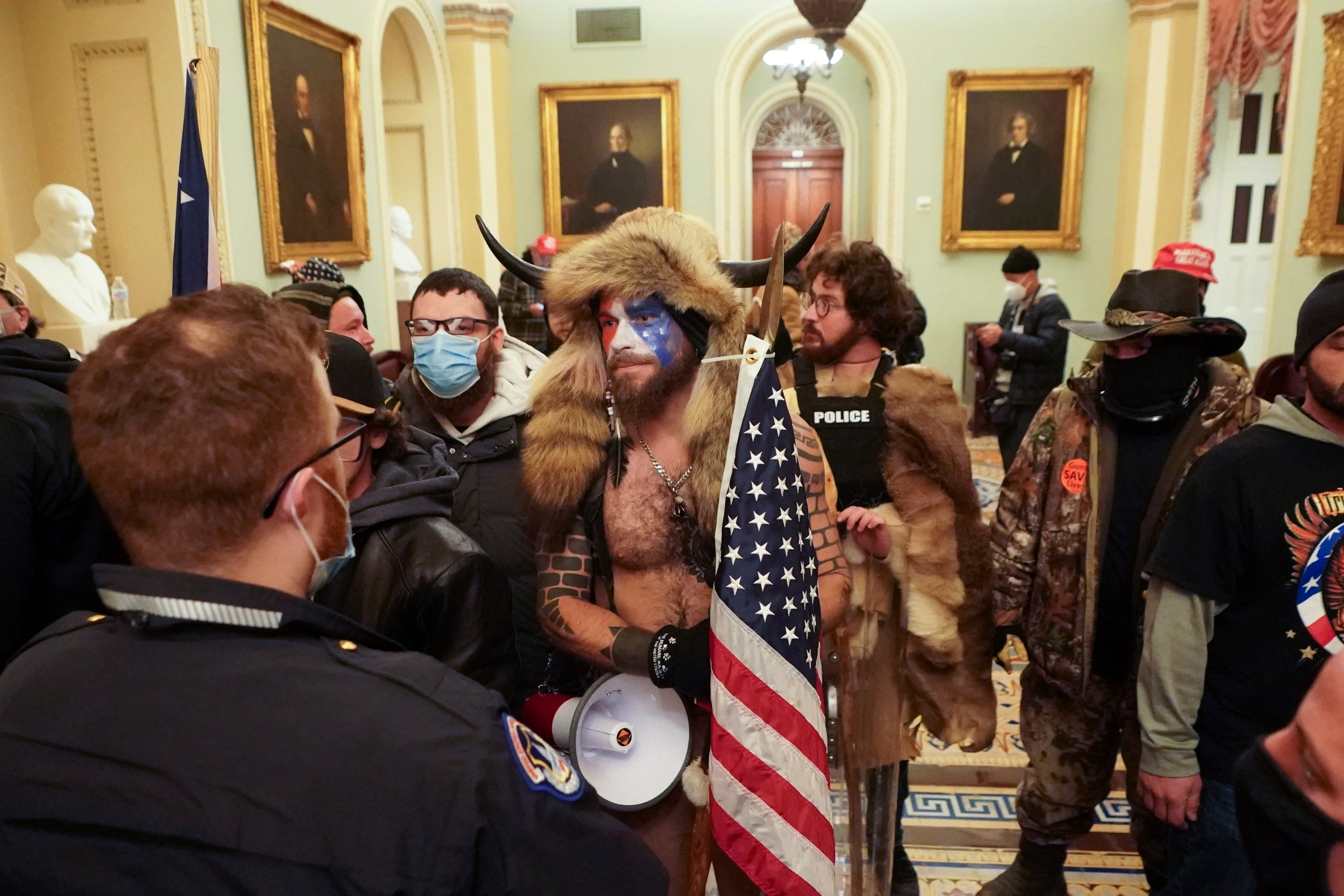 Supporters of President Donald Trump, including Jake Angeli, who swarmed the U.S. Capitol confront Capitol Police officers in the building, in Washington, Jan. 6, 2021. As people rushed inside, there was a strange mix of confusion and excitement, and the almost complete lack of police presence, in the beginning, amplified the feeling of lawlessness.

There were also leaders from the Proud Boys, such as Nick Ochs, a failed Hawaii state legislature candidate and member of a collective called “Murder the Media.” Chris Hood and members of his National Socialist Club, a neo-Nazi group, posted photos on Telegram from outside the Capitol on Wednesday. And the Three Percenters, a far-right armed group, were seen gathered in Washington’s Freedom Plaza on Tuesday night, most wearing helmets and Kevlar vests adorned with the group’s symbol, a Roman numeral three.

The mob came from the broader crowd, tens of thousands of Trump’s most loyal supporters, many of whom had driven through the night, or taken buses with friends and neighbors, to watch him speak and be part of a day that many hoped would finally hold some answers to what had been months of false claims that the election had been stolen. A number of people interviewed said they had never been to Washington before.

In interviews Wednesday, protesters in the broader crowd expressed a sense that something would happen — something that was bigger than they were. What exactly it would be no one could say. Before the Capitol was stormed, some hinted darkly about violence and the looming threat of civil war. But when pressed for what that might mean, they tended to demur, saying simply that, if called, they would serve their side in a conflict.

“There’s been lots of people talking about this day coming for a long time,” said Brian Sachtleben, 40, an asphalt truck driver from a small town near Sheboygan, Wisconsin, who was looking at the sea of people spreading from the Washington Monument to the Ellipse, marveling at the numbers, shortly before Trump began to speak.

When asked what he thought might happen, he said: “I don’t know. I really don’t know.”

He referred cryptically to the Thomas Jefferson quote: “The tree of liberty must be refreshed from time to time with the blood of patriots and tyrants.”

Then he added: “I don’t think anything is going to be back to normal ever again.”

He left town before the violence began.

When those who entered the Capitol later reemerged after their rampage, many were welcomed like returning heroes.

“Yeah, we stopped the vote!” screamed a man in a navy-blue zippered jacket, as he emerged, hands held high, from a tall yellow wooden door, as people outside whooped and cheered. “Murder the media” was scrawled in black marker across the other part of the double door.

Many said they would not have tried to go in, but they sympathized with those who had.

“I’m not going in there, but, yeah, I’m kind of OK with it,” said Lisa Todd, 56, a high school teacher from Raleigh, North Carolina. She was standing with three friends, all fellow teachers.

Others expressed some regret.

Storming the Capitol was “probably not the best thing to do,” said Eric Dark, 43, a truck driver from Braman, Oklahoma, who was tear-gassed when he got to the top of the steps to the building but never made it inside.

He had been standing with Brian Hobbs, mayor of Newkirk, Oklahoma, near the top of the steps on the western side of the building around 4:30 p.m. when officers in riot gear started moving to clear out the thousands of people who had gathered.

It could have been a lot worse, he said.

“We had enough people; we could have tore that building down brick by brick,” he said. 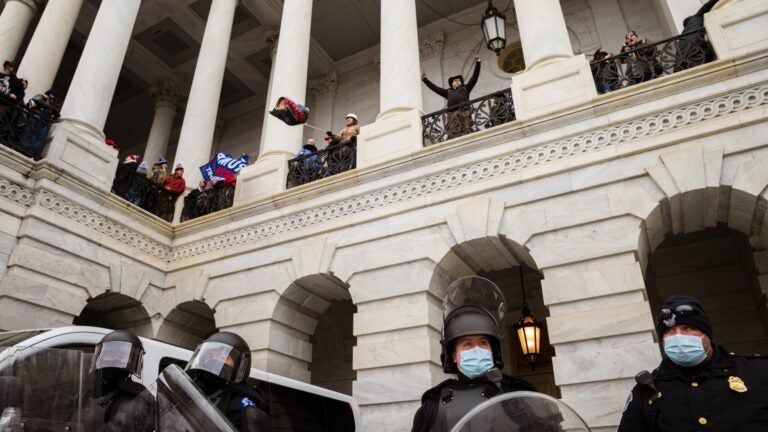