Neither is his inauguration.

Amid both the COVID-19 pandemic and security concerns, Biden’s inaugural committee installed roughly 191,500 flags on the National Mall to fill the space usually occupied by thousands of supporters. The remarkable display — located between the Washington Monument and the Capitol Building where Biden will be sworn in — includes American flags of varying sizes, as well as flags representing every U.S. state and territory.

However, it’s not a coincidence that the so-called “Field of Flags” may look particularly familiar to Bay Staters. Since 2010, the 37,000-flag garden in downtown Boston has been organized by the Massachusetts Military Heroes Fund, which was co-founded by Steve Kerrigan, a Boston-based political consultant and adviser to Biden’s inaugural committee. In an interview Tuesday night, Kerrigan told NECN that his experience with the Boston Common display “sort of inspired some of the planting that went on” at the National Mall.

The Boston Common flag garden, which was canceled last year due to the pandemic, is meant to honor fallen Massachusetts service members dating back to the Revolutionary War. Instead of honoring veterans, this week’s display in Washington, D.C., is intended to represent the people who can’t travel to the inauguration due to the deadly pandemic.

“To those of us with the Mass. Military Heroes Fund, every year we plant over 37,000 flags for lost service members from Massachusetts,” Kerrigan said Tuesday. “This evening, the night before the inauguration, President-elect Biden and Vice President-elect [Kamala] Harris, are going to be near those flags and commemorating the almost 400,000 people we’ve lost to COVID.”

Kerrigan, who organized President Barack Obama’s second inaugural ceremony in 2013, also noted that the patriotic display stands in “stark comparison” to the riotous march leading to the breach of the Capitol Building by supporters of President Donald Trump on the very same ground two weeks ago.

“This is really an opportunity for America to look and be proud together and have a collective moment of remembering that we are the United States of America and that we’re all in this together,” Kerrigan said.

Here’s a look at more photos Wednesday of the Field of Flags: Flags on the National Mall on Wednesday morning. 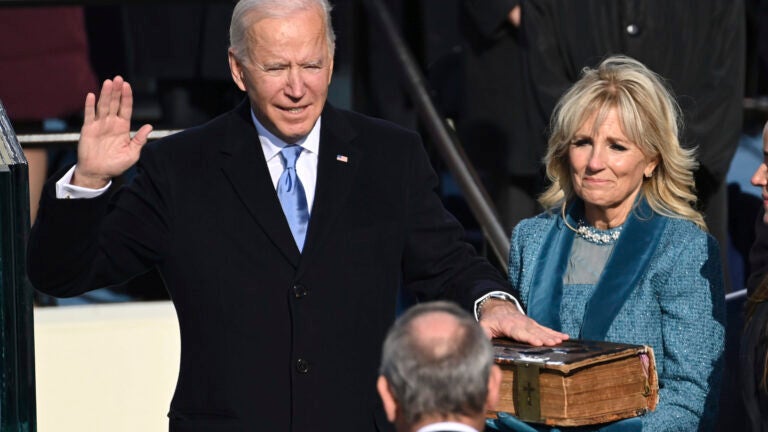