WASHINGTON (AP) — House Republicans decided Wednesday to stand by two GOP lawmakers who have polarized the party, voting to retain Rep. Liz Cheney as their No. 3 leader and saying they’d fight a Democratic push to kick Rep. Marjorie Taylor Greene off her committees.

In a 145-61 vote by secret ballot, House Republicans overwhelmingly rebuffed a rebellion by hard-right conservatives to toss Cheney, R-Wyo., over her vote last month to impeach then-President Donald Trump.

Minority Leader Kevin McCarthy ridiculed Democrats for slating a House vote on Thursday that would remove Greene from her committees. McCarthy’s comment was a signal that he was dismissing bipartisan demands that the hard-right Georgia Republican be punished for her online embrace of racist and violent views and bizarre conspiracy theories.

The decisions over Greene and Cheney have subjected the GOP to a politically agonizing test of its direction as it moves beyond the Trump presidency. Since he grudgingly vacated the White House last month, the party has been ideologically adrift as it’s struggled over whether to embrace his norm-busting divisiveness or the party’s more traditional, policy-oriented conservative values.

But shortly after the Democratic-led House Rules Committee cleared the way for Thursday’s vote, McCarthy released a statement saying Democrats were “choosing to raise the temperature” by attempting a “partisan power grab.”

McCarthy condemned Greene’s past endorsements of conspiracy theories — after weeks of saying little critical of her — and said the first-term congresswoman had recognized in a private conversation that she must meet “a higher standard” as a lawmaker. Greene has shown support for calls to violence against Democrats and bizarre fictions about faked school shootings.

“I hold her to her word, as well as her actions going forward,” McCarthy said.

Cheney is a daughter of former Vice President Dick Cheney and a fixture of the party establishment. She was among just 10 House Republicans to vote to impeach Trump last month.

“I won’t apologize for the vote,” Cheney told her colleagues in the closed-door session, according to a person familiar with the session who spoke on condition of anonymity to discuss the private meeting.

During a break in that closed-door session, McCarthy told reporters he’d defended Cheney inside.

“People can have differences of opinion. That’s what you can have a discussion about. Liz has a right to vote her conscience,” said McCarthy, who’d previously given no clear signal about whether he’d support his lieutenant.

At the earlier Rules Committee meeting, Chair Jim McGovern, D-Mass., said lawmakers would send “an awful message” if they took no action on Greene. “If this is not the bottom, I don’t know what the hell is,” McGovern said.

McCarthy tried to push blame onto Democrats, criticizing them for taking no action against their own lawmakers whom he didn’t name, including one he said “spread anti-Semitic tropes.” Rep. Ilhan Omar, D-Minn., made comments critical of Israel in 2019 and apologized.

The internal GOP fight over how to handle Greene and Cheney underscored the hold Trump and his voters still have on much of the party. But it’s not uniform.

Around two-thirds of House Republicans voted to back Trump’s effort to overturn his November election loss — just hours after his supporters’ deadly storming of the Capitol that led to his impeachment for inciting insurrection. Yet Senate Minority Leader Mitch McConnell, R-Ky., and other GOP senators have lambasted Greene, reflecting worries that her wing of the party cannot win statewide Senate races.

House Republicans had faced bipartisan pressure to punish Greene, including from McConnell. A House vote was expected to be a political ordeal for many Republicans, forcing them to go on record defending or punishing the unapologetic, social media-savvy Greene.

She burst onto the national political scene after just a month in office and with enthusiastic support from Trump. Even during the effort to punish her, she has lashed out at Democrats and raised money on the controversy.

Republicans appointed Greene to the Education and Labor Committee, a decision that drew especially harsh criticism because of her suggestions that mass school shootings in Connecticut and Florida could be hoaxes. Greene is also on the Budget Committee.

McCarthy said Democrats turned down his offer to move Greene onto the House Small Business Committee instead.

It’s unusual for party leaders to strip lawmakers of committee assignments, which can help them address their districts’ needs and raise campaign contributions.

In 2019, House GOP leaders removed Rep. Steve King, R-Iowa, who had a history of racist comments, from the Agriculture and Judiciary panels after wondering aloud in a New York Times story about when the term “white supremacist” became offensive. He lost the Republican primary for his seat in 2020 and is out of Congress after serving nine terms.

The Senate plans to begin its impeachment trial of Trump next week. In a procedural vote last week, all but five GOP senators voted to scuttle the proceedings, indicating that his conviction is unlikely. 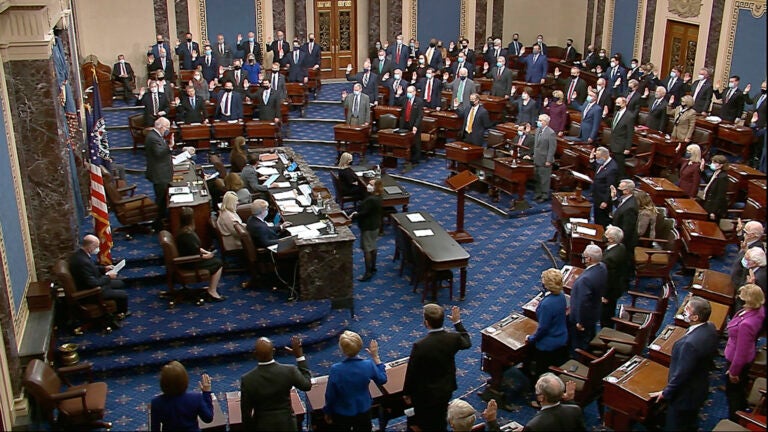