A month after a violent mob stormed the Capitol building in Washington D.C., there’s one scene in particular that has stayed with Rep. Ayanna Pressley.

Appearing on CNN’s “State of the Union” on Sunday, the Massachusetts congresswoman reflected on the insurrection as the U.S. Senate takes up its impeachment trial of former President Donald Trump on Tuesday.

Pressley pushed back on a notion coming from some lawmakers that urges for the nation to simply move on and warns that the impeachment only serves to further divide Americans.

“For those that continue to feign great surprise about what happened on Jan. 6, as a Black woman to be barricaded in my office using office furniture and water bottles on the ground in the dark, that terror — those moments of terror — is familiar in a deep and ancestral way for me,” Pressley said.

“And I want us to do everything to ensure that a breach like this never occurs at the Capitol (again),” she continued. “But I (also) want us to address the evil and scourge that is white supremacy in this nation.”

“One of the images that I’m haunted by is the black custodial staff cleaning up the mess left by that violent white supremacist mob. That is a metaphor for America,” Democratic Rep. Ayanna Pressley discusses the Jan. 6 attack on the US Capitol and impeachment #CNNSOTU pic.twitter.com/t9tHHtcGwv

Trump was charged and impeached by the House last month for inciting the crowd, which left five dead on Jan. 6.

Pressley told CNN host Jake Tapper that Senate lawmakers must hold Trump accountable just as their colleagues in the House did.

Tapper highlighted that House Democrats have said they’re afraid for their safety since the attack, and noted that the news station wasn’t sharing Pressley’s location in its broadcast — typically standard during a guest’s on-air appearance — because Pressley herself has “significant security concerns.”

Does she feel safe going to work, he asked?

“You know, living with threats, and living with bigots who are as vile in their rhetoric as they are in the policies that they seek and enact, and the harm that they seek to cause the most marginalized communities — Black Americans, in particular — is not new. Again, this is familiar in an ancestral sort of way,” Pressley said. “So it is not going to deter … me from doing my job on behalf of the American people.”

Last month, staffers in Pressley’s office reported that panic buttons that had been in their Congressional workplace before the riot had been removed sometime before the mobs stormed the building.

The matter is now under review by the House Administration Committee after Democratic lawmakers, including Pressley, demanded answers to why the crowds were able to overrun the Capitol and whether they were assisted from within the building. 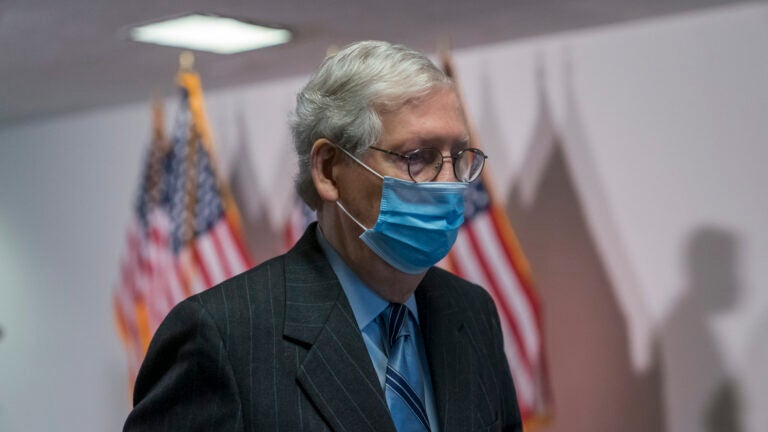 What to expect from Trump’s second impeachment trial