WASHINGTON – After a contentious debate on the Equality Act, which would extend civil rights protections to the LGBTQ community, Rep. Marie Newman, D-Ill., on Wednesday raised a transgender pride flag outside her office – which happens to sit directly across from the office of Rep. Marjorie Taylor Greene, R-Ga., one of the bill’s most vocal opponents.

“Our neighbor, @RepMTG, tried to block the Equality Act because she believes prohibiting discrimination against trans Americans is ‘disgusting, immoral, and evil,'” Newman, who has a transgender daughter, wrote on Twitter with a video of her hanging the flag. “Thought we’d put up our Transgender flag so she can look at it every time she opens her door.”

Greene, who lost her committee memberships by promoting false and extremist claims, quickly responded with her own video mocking Newman’s earlier tweet as she hung up a poster that said, “There are TWO genders: Male & Female. Trust the science.”

“Thought we’d put up ours so [Newman] can look at it every time she opens her door,” Greene said.

Thought we’d put up ours so she can look at it every time she opens her door 😉🇺🇸 https://t.co/7joKpTh6Dc pic.twitter.com/aBGRSiIF6X

The exchange quickly went viral, leading critics to accuse Greene of cruelty directly aimed at Newman’s family — the latest bit of outrage spurred by a House member who has espoused QAnon’s baseless theories and falsely suggested that former president Donald Trump’s supporters were not present at the Jan. 6 Capitol riot.

“This hate is exactly why the #EqualityAct is necessary and what we must protect [Newman’s] daughter and all our LGBTQ+ loved ones against,” he said in a tweet.

The Equality Act has a strong Democratic backing in the House and Senate, and a past iteration of the bill drew support from a small number of Republicans. But many Republicans — from moderates like Sen. Mitt Romney (Utah) to hard-liners like Greene — oppose the bill and argue it would threaten religious liberties.

Some, like Greene, have also claimed that the bill will roll back protections for women by allowing transgender people to participate in sports and extending discrimination protections based on gender identity, rather than biological sex. Critics have panned those arguments as transphobic, with roots in a fringe political movement that has made some radical feminists and conservatives unlikely allies on the issue.

Greene tried to delay a House vote on the bill on Wednesday by making a motion to adjourn so that her colleagues could “rethink destroying #WomensRights and #WomensSports and #ReligiousFreedom,” she said in a tweet. She had already been attacked by Democrats for trying to block the vote instead of simply voting no on the bill.

Newman, a freshman congresswoman who has been a passionate champion for the Equality Act, said she ran for office to make the world a better place for her daughter. On Wednesday, she gave an emotional speech on the House floor, expressing her support for the bill, which was shared widely on social media.

“I rise today on behalf of the millions of Americans who continue to be denied housing, education, public services, and much, much more because they identify as members of the LGBTQ community,” Newman said. “Americans like my own daughter, who years ago bravely came out to her parents as transgender. I knew from that day on, my daughter would be living in a nation where [in] most of its states, she could be discriminated against, merely because of who she is.”

In addition to hanging an anti-trans sign outside of Newman’s office on Wednesday, Greene also tweeted a personal attack that refused to refer to the Illinois congresswoman’s daughter as a woman. The afternoon exchange sparked a new round of harsh blowback for the Georgia Republican.

“This is sad and I’m sorry this happened,” Rep. Adam Kinzinger, an Illinois Republican who has been a vocal critic of the party’s far-right wing, tweeted on Wednesday night. “Rep. Newmans daughter is transgender, and this video and tweet represents the hate and fame driven politics of self-promotion at all evil costs. This garbage must end.”

“Your sign is incorrect because it’s not what the science says,” Lieu tweeted Wednesday evening, quoting a Scientific American column that concludes: “The science is clear and conclusive: sex is not binary, transgender people are real.”

The criticism of Greene also came from beyond the confines of the Capitol building. Many activists and political commentators denounced her actions, including the conservative CNN contributor S.E. Cupp.

“Rep. Newman’s daughter is transgender,” Cupp said in response to Greene’s video. “Public servants of good faith argue policy. Ghouls who believe they’re only representing themselves, not actual people, get personal and nasty.”

Despite Republican efforts to combat the bill, it is likely that the Democrat-controlled House will pass the Equality Act. Newman will certainly be among the lawmakers voting in favor of the bill.

“Without the Equality Act, this nation will never live up to its principals of freedom and equality,” Newman said on the House floor Wednesday afternoon. “The best time to pass this act was decades ago. The second best time is right now. I’m voting ‘Yes’ on the Equality Act for Evie Newman, my daughter and the strongest, bravest person I know.”

If the legislation succeeds in the House, it will move on to the Senate, where it could pass, but may be challenged with a filibuster if Democrats cannot convince 10 Republicans to join them. President Biden has already said he would sign the bill into law if it is passed. 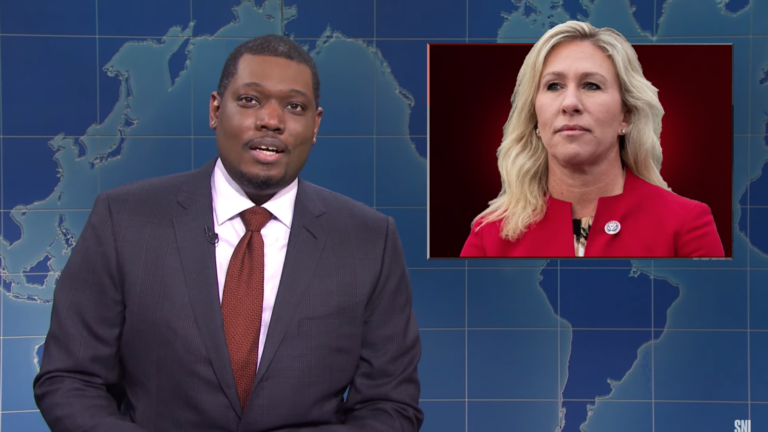