Sen. Elizabeth Warren makes what sounds like a fairly convincing argument: Given that billionaires in the U.S. saw their collective wealth increase 44 percent during the first 11 months of the pandemic, as so many other Americans suffered financially, couldn’t they be contributing a little more?

“A two-cent wealth tax would just help level the playing field a little bit, and create the kind of revenue that would let us build back better, as Joe Biden says,” Warren said during a press conference last week unveiling her latest proposal, which calls for a 2 percent annual tax on household assets between $50 million and $1 billion, and a 3 percent tax on the assets of fortunes above $1 billion.

But if her overtures have the ultra-wealthy worried, they should take solace in the results of our Boston.com poll asking whether people support a wealth tax in the U.S. Turns out most of those who responded have the billionaires’ backs.

Readers pointed out that it’s unfair and possibly unconstitutional to tax assets as opposed to income; that billionaires will just leave the country or figure out other loopholes, because that’s what they do; and that in real numbers the wealthy are already paying their “fair share,” despite declarations of politicians to the contrary.

“That is the most stupid idea I have ever heard. The Supreme Court will definitely throw it out,” said John from Newton, with another respondent — a billionaire, apparently — asking, “Why should I pay for all the crazy spending of our government?”

Others made a “slippery slope” argument: “Soon, the government will be reaching into everyone’s savings account,” said one reader.

That’s not to say the wealth tax didn’t have support in some quarters.

“The Warren proposal is a modest and long overdue step towards addressing the growth of grotesque inequalities in income and wealth,” said George from Boston. And another reader responded, “A wealth tax actually benefits the ultra wealthy in that they, too, benefit from a society in which all thrive and are free from want to share their gifts.”

In total, of the more than 500 readers who responded, 53% were against, with only 41% in favor. The rest chose “other” and suggested alternate options, like raising taxes on income instead; taxing capital at the same rate as income; imposing a flat tax across the board, regardless of income; taxing college endowments; and tying any wealth tax to Congress balancing the budget for the fiscal year in question.

Here’s a sampling of what readers had to say on both sides of the issue.

Against a wealth tax:

“Billionaires should pay higher taxes but a wealth tax is not the answer. It failed in France years ago. Billionaires are the most mobile segment of the population and it would be a shame to lose innovators like Elon Musk, who has changed America’s competitiveness in renewable tech, or Jeff Bezos, who pledged $10 billion to fight climate change, or Bill Gates/Warren Buffet, who signed the giving pledge. The better path forward is taxing capital at the same rate as income.” — John P

“See France, et. al. after similar policies. People with this much money don’t have to necessarily renounce citizenship, just relocate, use loopholes, etc. This is posturing and unproductive, Warren’s trademarks.” — Dan, Boston

“Beware of the law of unintended consequences. Sure, it’s at the $50 million threshold today. But if this gets passed, that number will drop rapidly. Soon, the government will be reaching into everyone’s savings account.”

“We are a free market economy and this goes against that to its core. We are not a socialist nation nor do most of us want to be one.” — Josh, Cohasset

“You should charge the wealthy more income tax, not take away money they have already earned and paid taxes on.”

“People always confuse income and wealth. By and large, wealth is the return on past sacrifices of spending in order to generate savings that you then invest. The bulk of the wealth at this level is in the ownership of businesses, not sitting around in cash in some bank account.”

“We need to simplify the tax code and eliminate things like trusts, and other vehicles that obfuscate people’s true wealth.” — Dan, Longmeadow

“Let’s keep penalizing people for being successful and never hold others responsible for their choices/actions in life. Gotta keep giving freebies to the takers, so they’ll vote Democrat.” — John, Lexington

“Why doesn’t the government focus on spending the money they already have better? It is the equivalent of leaving every faucet in the country running 24/7 and saying there is a water shortage and the wealthy aren’t paying their fair share of the water bill.”

For a wealth tax:

“The Warren proposal is a modest and long overdue step towards addressing the growth of grotesque inequalities in income and wealth even as key infrastructure is in disrepair and public provision of social goods (education, healthcare and affordable housing) is woefully inadequate.” — George, Boston

“You don’t have to be a millionaire to live comfortably. There is a feeling of satisfaction that comes from being considerate to others. You won’t go hungry or without by helping to make society better.” — Rob, Everett

“A wealth tax would provide enough funding to make impactful changes to the less fortunate and underprivileged people that have disproportionately suffered through the pandemic, while the 1 percenters have flourished.” — Ricky, Braintree

“Even 1% would be a huge windfall for the U.S. budget and deficit. Further, it allows the IRS the proper budget to enforce the law and bring in even more taxes. This should be coupled with cutting out some of the government spending waste.”

“Not only can they pay more, but the extra wealth shows they gain more from a functioning and stable society. Taxes are the price we all pay for that.” — Ben, Bedford

“A wealth tax actually benefits the ultra wealthy in that they, too, benefit from a society in which all thrive and are free from want to share their gifts.”

“If there is honest math that truly breaks down that ultra rich pay less than the average taxpayer, then it is a good idea and should be put into programs for national healthcare and infrastructure to benefit all taxpayers. Go for it!” — John, Shrewsbury 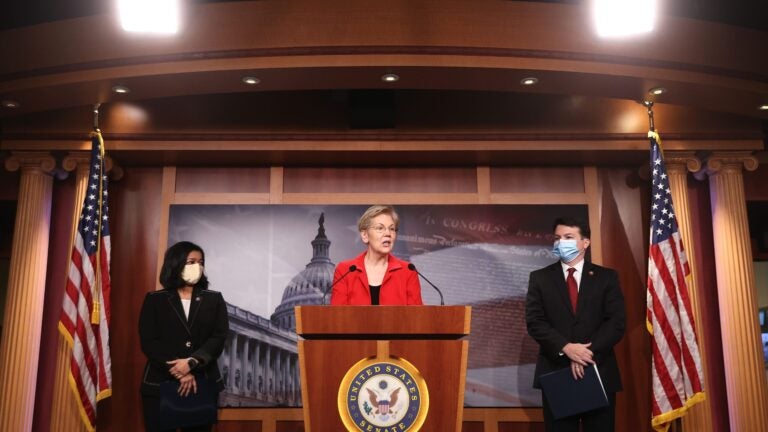 Elizabeth Warren says her wealth tax plan would allow the country to ‘build back better.’ But is Joe Biden on board?