“The Administration should not be enriching a company that has profited from the devastation of our communities,” Healey wrote in a series of tweets Thursday afternoon, in response to the news that the Baker administration had tapped McKinsey to study the “future of work” in the wake of the COVID-19 pandemic.

Last month, McKinsey agreed to pay $573 million to settle an investigation led by Healey’s office and 46 other state attorneys general into its work to help opioid companies boost their sales — including the design of a marketing plan for Purdue Pharma to help them “turbocharge” OxyContin sales.  Healey — who is in a separate legal battle with Purdue, which allegedly misled doctors and patients about its drugs’ addictiveness —  has said that more than 670 Massachusetts residents have died of overdoses after being prescribed Purdue opioids.

Healey’s office says that Massachusetts will receive $13 million from McKinsey from the settlement over the consulting firm’s role in marketing the drug.

“After what they did to families here, why would we reward them [with] more state contracts?” the Democratic attorney general wrote Thursday, noting that the Baker administration had paid $17 million to McKinsey in state contracts since July.

My office found that McKinsey advised Purdue & other opioid companies how to “turbocharge” opioid sales to increase profits.

After what they did to families here, why would we reward them w/ more state contracts? The Administration has paid them $17M since July. It’s outrageous. https://t.co/NcMIm7hE2d

Our settlement with McKinsey will bring $13 million to Massachusetts for treatment, prevention, and recovery services. This is money our communities need.

The Administration should not be enriching a company that has profited from the devastation of our communities.

Baker’s office confirmed that they had hired McKinsey for the future of work project this week, after releasing a “request for proposal” on Feb. 12 seeking contractors to conduct the study on the broad implications of the post-pandemic shift toward remote work. The administration has also paid millions to the well-known firm for help with school reopening plans, the COVID-19 response, and the study of MBTA privatization. According to state records, Massachusetts has paid McKinsey nearly $7 million this month alone — which Healey noted occurred after her office’s settlement.

In response to Healey’s comments, Baker’s office did not address the decision to hire McKinsey, but called for unity in support of the administration’s efforts to respond to the opioid epidemic. Specifically, Sarah Finlaw, a spokeswoman for the Republican governor, noted that Baker has repeatedly proposed a 15 percent tax on the sales of opioid manufacturers, which has faced opposition from the pharmaceutical industry.

“Building on the Administration’s accomplished record in combating the opioid epidemic, the Governor recently proposed a surtax on opioid manufacturers of these deadly drugs in order to boost funding for treatment,” Finlaw said, “and while the industry is fighting the Governor to stop the legislation, the Administration hopes all public officials join the governor in supporting this important policy.”

Healey’s unusually direct rebuke Thursday comes amid wide speculation that the Boston Democrat, who has also taken an increasingly active role in the state’s COVID-19 vaccine rollout, may run for governor in 2022. Baker has not announced whether he intends to run for a third term. 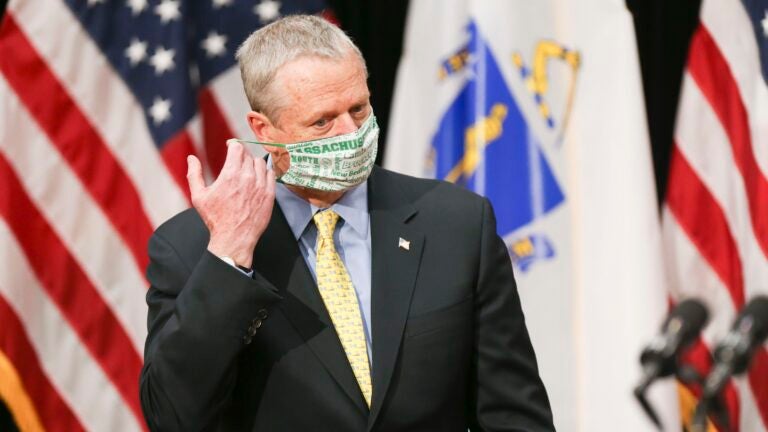