Rep. Matt Gaetz, a Florida Republican and a close ally of former President Donald Trump, is being investigated by the Justice Department over whether he had a sexual relationship with a 17-year-old and paid for her to travel with him, according to three people briefed on the matter.

Investigators are examining whether Gaetz violated federal sex trafficking laws, the people said. A variety of federal statutes make it illegal to induce someone under 18 to travel over state lines to engage in sex in exchange for money or something of value. The Justice Department regularly prosecutes such cases, and offenders often receive severe sentences.

It was not clear how Gaetz met the girl, believed to be 17 at the time of encounters about two years ago that investigators are scrutinizing, according to two of the people.

The investigation was opened in the final months of the Trump administration under Attorney General William Barr, the two people said. Given Gaetz’s national profile, senior Justice Department officials in Washington — including some appointed by Trump — were notified of the investigation, the people said.

The three people said that the examination of Gaetz, 38, is part of a broader investigation into a political ally of his, a local official in Florida named Joel Greenberg, who was indicted last summer on an array of charges, including sex trafficking of a child and financially supporting people in exchange for sex, at least one of whom was an underage girl.

Greenberg, who has since resigned his post as tax collector in Seminole County, north of Orlando, visited the White House with Gaetz in 2019, according to a photograph that Greenberg posted on Twitter.

No charges have been brought against Gaetz, and the extent of his criminal exposure is unclear.

Gaetz said in an interview that his lawyers had been in touch with the Justice Department and that they were told he was the subject, not the target, of an investigation. “I only know that it has to do with women,” Gaetz said. “I have a suspicion that someone is trying to recategorize my generosity to ex-girlfriends as something more untoward.”

Gaetz called the investigation part of an elaborate scheme involving “false sex allegations” to extort him and his family for $25 million. He said he and his father, Don Gaetz, had been cooperating with the FBI after they were approached by people saying they could make the investigation “go away.”

A Justice Department spokesman declined to comment, as did a spokeswoman for the U.S. attorney’s office in Central Florida.

Greenberg pleaded not guilty last year and was sent to jail this month for violating the terms of his bail. He is scheduled to go on trial in June in Orlando.

A frequent presence on Fox News and other conservative media, Gaetz has recently mused with confidants about quitting elected politics and taking a full-time job with the conservative television channel Newsmax or another network, according to a person familiar with the conversations. Axios first reported on Tuesday that Gaetz was considering leaving Congress.

Greenberg maintained ties to controversial figures who have supported Trump, an examination of court records, social media posts and far-right websites showed. A website run by a member of the far-right group the Proud Boys and a network of fake social media accounts linked to Trump’s longtime political adviser Roger Stone have promoted false accusations about Greenberg’s rivals similar to rumors that prosecutors accused Greenberg of secretly trying to spread.

It was not clear how Greenberg knew either Gaetz or Stone. He posted a selfie with both in 2017, tweeting, “Great catching up.” The following year, Gaetz expressed support for Greenberg’s successful bid for local office, predicting he would someday make a great member of Congress.

On Capitol Hill, Gaetz has embraced the role of villain to the left as much as he has served as one of Trump’s staunchest defenders and enablers, often with theatrical flair. He wore a gas mask on the House floor last year in the early days of the pandemic, insisting he was demonstrating concern for public safety amid accusations he was mocking the seriousness of the spread of the coronavirus.

Gaetz was first elected to Congress in 2016. As a member of the Florida Legislature and the scion of a Republican political family, he had initially backed former Gov. Jeb Bush of Florida in the Republican presidential primary that year before hitching his political fortunes to Trump.

It paid off. He won a seat in Congress representing part of the Florida Panhandle, and as one of Trump’s most flamboyant supporters on Capitol Hill and on cable television, his profile skyrocketed.

Gaetz invited a right-wing Holocaust skeptic to the State of the Union address in 2018, and attended an event last year where he said the Proud Boys had provided security, though he has distanced himself from the group on his podcast. When Democrats moved in 2019 to impeach Trump for the first time, Gaetz and a phalanx of Republicans following him barged past Capitol Police into the secure rooms of the House Intelligence Committee to briefly break up the investigation into the president.

After Trump’s defeat last year, Gaetz once again rallied to his side, defending the president’s baseless claims of widespread election fraud. Gaetz helped organize efforts among lawmakers to challenge President-elect Joe Biden’s victory during Congress’ certification of it on Jan. 6 that was disrupted for hours by a pro-Trump mob that stormed the Capitol. Gaetz later traveled to Wyoming to hold a rally against Rep. Liz Cheney, a Republican leader who had voted to impeach Trump for inciting the riot.

In 2017, Gaetz was the only member of Congress to vote against a law that gave the federal government more power and money to fight human trafficking.

“Voters in Northwest Florida did not send me to Washington to go and create more federal government,” Gaetz said in a local television interview at the time. “If anything, we should be abolishing a lot of the agencies at the federal level.”

Gaetz’s personal life has gained attention before. Last summer, he announced that he had a son, Nestor Galban, 19, though Gaetz said he was not Galban’s biological father, nor had he adopted him. Galban had been 12 when they met and had come to the United States from Cuba; Gaetz was at the time dating Galban’s sister.

“He is a part of my family story,” Gaetz told People magazine in June. “My work with Nestor, our family, no element of my public service could compare to the joy that our family has brought me.”

Gaetz proposed to his girlfriend, Ginger Luckey, at Trump’s Mar-a-Lago club on Dec. 30.

It was unclear how investigators in the Greenberg case began examining Gaetz’s conduct. Last June, federal prosecutors secured an indictment against Greenberg, accusing him of stalking a political rival.

Around that time, federal authorities seized Greenberg’s phone and laptop, according to court records. They discovered evidence that Greenberg, whose job responsibilities included issuing licenses, was creating fake identification cards for himself and a teenage girl, and was experimenting with holograms used on permits for concealed firearms, according to court documents.

Two months later, he was indicted on the sex trafficking charge. From May to November 2017, prosecutors said, Greenberg targeted the girl, who was between 14 and 17, saying he “recruited” and “solicited” her for sex acts in exchange for unspecified perks or favors.

Greenberg worked in advertising before running successfully at the age of 31 in 2016 for tax collector in Seminole County.

Within days of taking office, he fired three employees who had supported his predecessor and began spending more than $1.5 million in taxpayer money on personal expenses, including guns, ammunition, body armor and a drone, as well as on computers for his own cryptocurrency venture, a county audit later revealed.

The following year, according to The Orlando Sentinel, Greenberg posted a photograph of himself on social media with Milo Yiannopoulos, a right-wing personality who has a history of making racist remarks. The newspaper also detailed Greenberg’s own misogynist and anti-Muslim comments on Facebook.

In his bid for reelection, Greenberg turned in late 2019 to clandestine tactics to undermine a possible rival, according to court papers. Prosecutors said he sent an anonymous letter to the school where one potential candidate worked that made unfounded accusations of sexual misconduct with a student and making similar claims on a fake Facebook account.

As the primary race intensified last summer, similar messaging began appearing on fake social media accounts that have been tied to Stone.

“Watch out Seminole county,” someone named April Goad said on Facebook, warning Floridians “don’t open your door” to the rival candidate, according to Graphika, a company that specializes in analyzing social media.

The post linked to an article about the rival published on Central Florida Post, a website controlled by Stone’s associates that had written favorable articles about Greenberg. The website was founded by a member of the Proud Boys who has been linked to security providers for Stone on Jan. 6 in Washington in the lead-up to the insurrection at the Capitol.

Greenberg’s reelection efforts quickly evaporated when he was first indicted last June, and he resigned a day later. 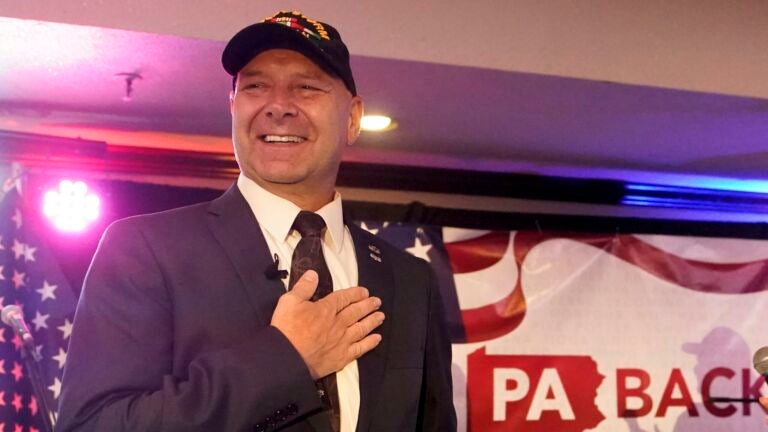