While political observers in Massachusetts wait for key individuals to declare their intentions in the 2022 race for governor, one Democratic state representative is launching her bid for the No. 2 job.

Rep. Tami Gouveia, a progressive, second-term lawmaker from Acton, is announcing her campaign Monday to be the next lieutenant governor of Massachusetts, calling for a more ambitious approach and robust social safety net as the state emerges from the COVID-19 pandemic.

“We’ve been playing it much too safe for a state that is as rich in resources as we are, that is as smart and as educated as we are, and there’s opportunities for us to address some of the policies that have left people behind,” Gouveia told Boston.com in an interview, pointing to worsening economic and racial inequalities in the state.

“We need leadership, and I don’t see that coming out of the corner office right now,” she added.

A Lowell native, Gouveia was elected to represent the 14th Middlesex District in the State House in 2018, following a 25-year career as a social worker focused on protecting children from exposure to environmental toxins and preventing substance abuse.

Following the election of former president Donald Trump, she founded the Massachusetts chapter of the Women’s March before running for state representative while working on her doctorate in public health, which the 46-year-old completed during the pandemic.

And she’s been particularly critical of the Baker administration during the COVID-19 pandemic for not working more collaboratively with local public health and school leaders.

“One thing I hear over and over again is just how kicked in the teeth so many of them feel and how underutilized they have been through the pandemic,” Gouveia said, adding that many feel “completely ignored” by Baker and Lt. Gov. Karyn Polito.

Even after less than two-and-a-half years as a state representative, Gouveia says she did give thought to a gubernatorial campaign, but ultimately decided the lieutenant governor position was more suited to her experience convening people, as a “bridge” between municipalities and the administration.

“I would make sure that our municipalities — regardless of what role they fulfill — feel supported and bolstered in their roles,” Gouveia said. “They know their communities best.”

While Massachusetts now has one of the highest vaccination rates in the country, Gouveia remains critical of the Baker administration’s handling of the rollout, particularly the signup website’s lack of accessibility for elderly residents early on, as well as persistent racial disparities among residents who have gotten their shots.

“If you make a comparison between the predominantly white wealthy suburbs and the gateway cities, the percentage of vaccination rates is abysmal,” Gouveia said.

It remains unclear what the field in the 2022 lieutenant governor’s race will look like.

To some degree, it depends on the top of the ticket. Baker hasn’t said whether he will run for a third term. And if he doesn’t, many expect that Polito — who continues to out-fundraise her governing partner — will run for the governorship.

Several lower-profile GOP candidates, including Randolph resident Rayla Campbell and former Barnstable County commissioner Ron Beaty, had said they intend to run for lieutenant governor (though Beaty has since switched to run for state treasurer). And as The Boston Globe recently reported, a number of local Democrats, such as Boston City Councilor Lydia Edwards and state Sen. Eric Lesser, have privately signaled interest in the seat.

While candidates for governor and lieutenant governor run as a joint ticket in the general election, they’re nominated separately in their respective party primaries in Massachusetts.

Gouveia confirmed that her decision to run for lieutenant governor means she won’t be running for reelection to the State House, where she has occasionally clashed with Democratic leaders (Gouveia was one of just three Democrats who did not cast a vote for House Speaker Ron Mariano this past winter).

With more than three quarters of her second term remaining, Gouveia said she remains committed to serving her constituents in Acton, Carlisle, Chelmsford, and Concord. As a single parent for roughly 10 years who was finishing her doctorate at Boston University when she arrived at the State House, Gouveia said she’s used to juggling responsibilities at the same time.

“It feels like the right time to run now,” she said. “I want to put the skills that I have to use for the state as a whole.” 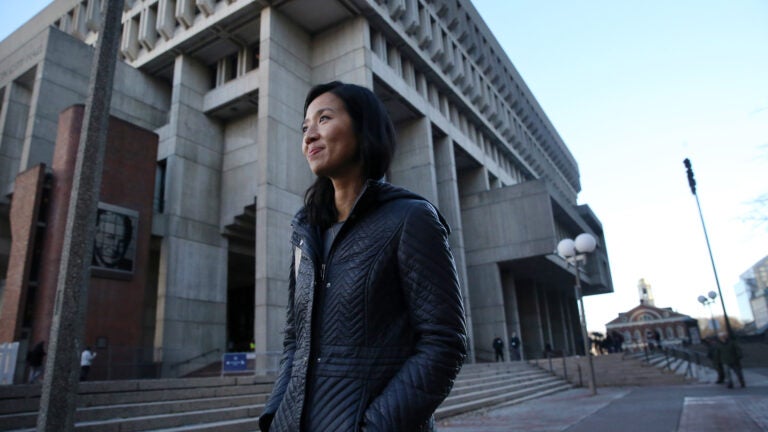