It’s back to the drawing board.

Acting Boston Mayor Kim Janey announced Thursday that she is moving to withdraw a zoning plan that would enable the construction of two soaring towers along the city’s waterfront, citing concerns about the impacts of climate change and a desire to make the waterfront more “welcoming” for all residents.

According to Janey, the city intends to develop a new plan with stronger requirements for resiliency, sustainability, and access along the waterfront.

“The goal of this process will be to develop a new approach that generates benefits, and protection from extreme weather and pollution for all residents across our city,” she said during a press conference Thursday afternoon.

However, the news also delays — and could very well force changes to — plans to construct a 600-foot office and residential skyscraper on the current site of the Boston Harbor Garage towering above the New England Aquarium, as well as a 275-foot hotel tower down the street where the James Hook & Co. seafood restaurant currently stands.

The city’s Downtown Waterfront District Municipal Harbor Plan — one of many similar waterfront zoning plans around Massachusetts — had been initially approved in 2017 after four years of work. The harbor plan, and those like it, allows municipalities to approve construction that would have otherwise violated an archaic statewide law with strict limits of the size of buildings near the water, as long as the project preserves a certain degree of public access.

However, some environmental advocates and existing waterfront residents argued that Boston’s waterfront harbor plan — which covers a 42-acre area from Long Wharf to the Moakley Bridge — went too far and was “developer-driven.”

Janey’s announcement Thursday comes amid pressure from Conservation Law Foundation, the Aquarium, nearby residents, and fellow candidates in the race for a full term as mayor for a re-done plan resulting in a smaller Harbor Garage redevelopment and more open space.

It also comes as Gov. Charlie Baker’s administration works to re-approve 17 waterfront plans around the state after a local judge ruled this past spring that they did not go through the correct process.

Asked if she had the power, as acting mayor, to scrap the zoning plan that previous administrations had spent years working on, Janey said, “I just did it.”

“Do you think we should wait? I don’t. I think we have to act with urgency,” Janey said, citing the most recent report by the United Nations’ Intergovernmental Panel on Climate Change and Boston’s vulnerability to seas and storms as a waterfront city.

“This is an opportunity for us to move our city forward in a way that engages residents and making sure that we are embedding the values of resiliency and equity in our future plants in a more meaningful way,” she said.

To take effect, the Baker administration must withdraw the waterfront plan on the city’s behalf. Asked about Janey’s request, a spokesperson for the state’s Executive Office for Energy and Environmental Affairs said Thursday night that the Baker administration had received notice of the city’s intent to request the withdrawal of the harbor plan, but was still waiting for a letter from the city formalizing the move.

Once they get the letter, the administration will review the request and determine next steps, the spokesperson said.

In a statement to The Boston Globe, a spokeswoman for Don Chiofaro, the developer behind the Harbor Garage project, said that they “have been, and continue to be committed to this city, this neighborhood and this investment.”

“The urgency for action is undeniable,” she said. “We welcome conversations with all who are interested in cooperating on a viable path to a more resilient, equitable, accessible and economically vibrant Downtown Waterfront.”

The current plans call for the Harbor Garage project call for 50 percent of the site to be open space, while the James Hook hotel tower, which is being separately developed, would consist of 30 percent open space.

Still, according to CLF President Bradley Campbell, the plan would have resulted in less public access to Boston Harbor, “one of the city’s greatest treasures.” Campbell praised Janey’s move as the “right decision.”

“It’s time to reform the planning processes for all waterfront neighborhoods to elevate the public’s voice and right to access the water,” he said. “We look forward to working with the city to achieve this goal.”

Janey said Thursday that she plans to kick off a series of meetings with residents, environmental justice organizations, and waterfront development experts to come up with an alternative approach, though she isn’t saying what she specifically wants to see in the revised plan.

“We’re moving forward with a process that will get us toward a new plan,” Janey said.

That, of course, will take time, but Janey expressed hope that it won’t take as long as the previous waterfront plan.

“We don’t want to start the clock with another four-year process. We don’t — again, we have to act with urgency,” she said.

Janey also noted that Boston’s Planning and Development Agency is adding a citywide coastal zoning overlay that requires new buildings and retrofits to take additional steps to limit the impacts of future flooding and urged those who had advocated against the downtown waterfront plan to “join us, not just in planning downtown, but in implementing plans we have for our entire waterfront.”

“We need to make sure that we’re looking at all of our neighborhoods,” Janey said, pointing to waterfront resiliency efforts in South Boston, Dorchester, East Boston, the North End, and Charlestown.

“I believe we can take this moment to do just that,” she added. 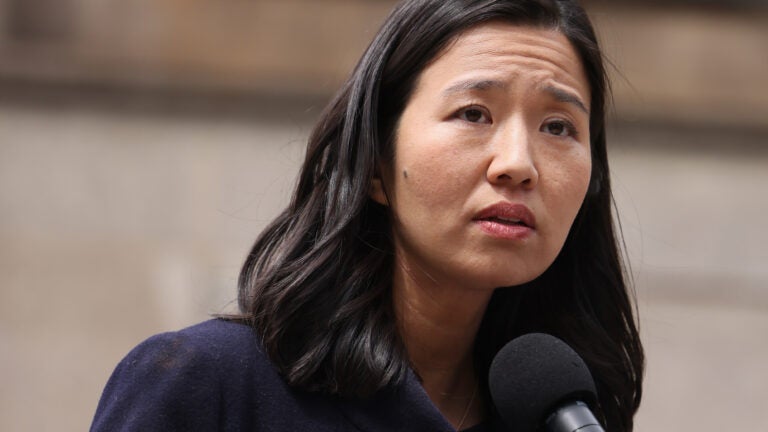