The process of winnowing down the list of potential future ballot questions in Massachusetts took another step forward Wednesday, as Attorney General Maura Healey unveiled the list of initiatives that passed her office’s constitutional review.

Of the 30 petitions submitted to Healey’s office last month, 16 proposed 2022 ballot initiatives and one proposed constitutional amendment that would be on the state’s 2024 ballot were deemed constitutional and allowed to move forward.

The eclectic list ranges from proposed laws to legalize happy hour and fireworks to hate crimes and energy efficiency; there’s also a battle brewing over the status of Uber drivers and delivery workers.

However, they all still have a long way to go.

For the proposed 2022 ballot measures, backers now must gather and file at least 80,239 signatures of registered voters in support of their effort by Dec. 1, perhaps the most difficult and laborious step in the process.

And then the legislature has the chance to act on them, before another smaller round of signature gathering.

But for now, they all remain distinct possibilities to appear on the 2022 (and 2024) ballot. Here’s the list:

A compromise proposed by local package stores, this ballot question would incrementally raise the total number of licenses to sell all types of alcohol that a single retailer can own from the current maximum of nine to 12 in 2023, to 15 in 2027, and to 18 in 2031. It would also cap the number of licenses to sell liquor to seven, though retailers that already have more than seven licenses would get an exemption.

The proposal comes after Cumberland Farms pushed to eliminate the cap and allow an unlimited number of grocery and convenience stores to sell alcohol with a proposed 2020 ballot question that was ultimately dropped in the midst of the pandemic.

Backed by the Massachusetts Republican Party, this proposed ballot question would require prospective voters to show some form of government-issued photo identification before being given a ballot at a polling place on Election Day.

Voters without such identification would be allowed to vote, but only if they sign a form at the polling place attesting to their identity and residence.

Proposed by the Massachusetts Nurses Association, the question would ban hospital CEOs in the state from serving on the boards of — or getting paid by — companies that develop, manufacture, or sell medical devices.

The law would take effect on July 1, 2024, but would not affect contracts that are already in effect on that date.

This initiative, also proposed by the Massachusetts Nurses Association, would effectively cap the amount of money high-earning hospitals in Massachusetts bring in at 8 percent of their operating margin.

The proposal would impose fines on hospitals equal to the amount that they exceed an 8 percent operating margin and use the funds to improve Medicaid reimbursement and maintain essential services at hospitals deemed to be more in need.

In what is shaping up to be fiercely fought battle between rideshare companies and workers advocates, this proposed ballot question, backed by the ridshare industry, would create a new classification of so-called gig worker.

Supporters noted that the classification would require that companies provide base compensation rates and new benefits to rideshare and delivery employees, while allowing individuals to maintain independence. Opponents argue that those benefits are less than what would be required under current law.

Basically the same question, but without a provision mandating that companies provide drivers mandatory safety training.

Submitted by a Massachusetts orthodontist, the ballot question would require dental insurance companies to spend at least 83 percent of premiums on medical claims and care, as opposed to administrative costs and profits. Under the proposal, a carrier would be required to refund excess premiums to its covered individuals and groups if it does not meet that threshold.

This proposed law would legalize the possession, use, and sale of fireworks by people who are at least 21 years old in Massachusetts, by 2024 at the latest (they’re currently illegal for anyone without a professional license).

Under the proposal, fireworks would still be illegal on school grounds, as well as by those under the influence of drugs or alcohol. It would also create a “Consumer Fireworks Regulation Commission” to issue regulations and license the sale of consumer fireworks.

9. Hate crimes against the police

Under the proposal, first responders include any law enforcement member, correctional officer, or firefighter, as well as police dogs.

10. Save the whales (and sea turtles)

Proposed by a conservationist known as the “Prince of Whales,” the ballot question would “ban the use of commercial fishing gear likely to entangle whales and sea turtles.” State officials would have to determine exactly which gear falls into that category, but anything that “employs vertical buoy ropes or gill nets would be prohibited.”

Any member of the public could enforce the proposed law by filing a civil lawsuit.

The proposed question, submitted by a Republican state representative, would ban Massachusetts from imposing any taxes or fees that would “reduce or restrict the supply of gasoline, diesel fuel, special fuels, or other motor fuels available to meet consumer demand.”

The ballot measure is seen by both opponents and supporters alike as an effort to block Gov. Charlie Baker’s administration’s Transportation and Climate Initiative.

The ballot question would effectively repeal that state’s decades-long ban on happy hour, by allowing bars and restaurants to sell free or discounted alcoholic drinks, among other things.

Proposed by a Dorchester lawyer, the measure would also allow the Alcoholic Beverage Control Commission to issue additional regulations consistent with the law.

Proposed by Raise Up Massachusetts, the law would require Massachusetts to include the name and location of corporate taxpayers when making public the annual reports of publicly traded corporations, banks, and insurance companies.

The information would not be made available until three years after the reports are filed.

14: The right to lawyer in eviction cases

The proposed question would expand the right to an attorney in the criminal justice system to civil eviction cases as well.

Under the proposal, poor tenants, as well as certain homeowners in Massachusetts, would have the right to free legal assistance when facing eviction. Landlords would also have to notify tenants of their potential eligibility.

For example, the tax credit for electric vehicles would apply to the smaller of $25,000, 50 percent of the purchase price, or 300 percent of the trade-in value of one’s gas-powered vehicle.

The tax credits would be capped by an individual’s total tax liability for a given year, but could be carried over for up to ten years.

Similar to the previous question, this proposal would also offer the same tax credits for electric vehicles and home efficiency purchases, as well as equivalent point-of-sale rebates.

Aiming for the 2024 ballot, this proposed constitutional amendment would repeal the state statue limiting mail-in voting “only for reasons of absence, physical disability, or religious conflict.” Legislators recently extended a pandemic-induced mail-in voting law through Dec. 15, but it is not yet permanent.

As Healey’s office noted, the path forward for the proposed constitutional amendment is different, requiring approval by at least 25 percent of two joint sessions of the Legislature before appearing on the November 2024 ballot. 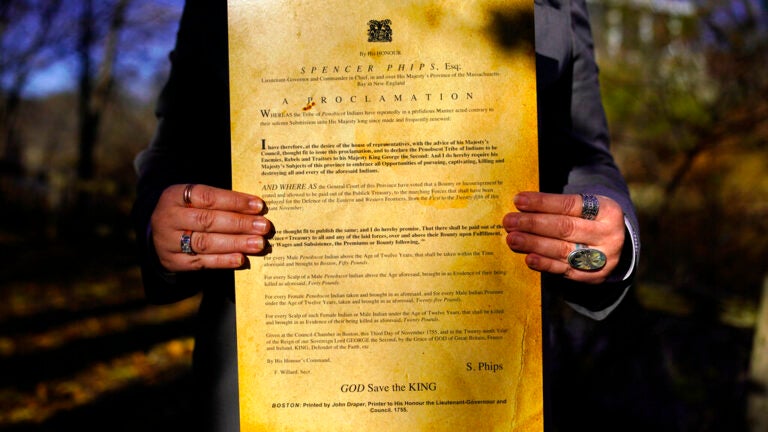