WASHINGTON — President Joe Biden huddled with congressional Democrats on Wednesday to try to break through a potentially devastating impasse over his multitrillion-dollar domestic agenda, toiling to bridge intraparty divisions over an ambitious social safety net bill and a major infrastructure measure as Congress raced to head off a fiscal calamity.

Democrats on both ends of Pennsylvania Avenue are nearing a make-or-break moment in their bid to push through huge new policies, as an escalating fight between the progressive and moderate wings — and a multitude of other divisions within the party — threatens to sink their chances of doing so while they retain control in Washington.

At the same time, even the basic functions of Congress — keeping the government from shutting down next week and from defaulting on its debt sometime next month — are in peril as Republicans refuse to support legislation that would both fund the government and increase the statutory cap on federal borrowing.

The challenges are unfolding against a backdrop of mistrust and strife within Democratic ranks. Moderates are pressing for quick action on the $1 trillion bipartisan infrastructure bill; progressives are demanding approval first of a far-reaching, $3.5 trillion domestic policy plan including vast new investments in climate, education, health and social programs.

Without consensus on both, Democrats, who have minuscule majorities in the House and Senate, will not have enough votes to send either to Biden’s desk. That prospect has sown alarm at the top echelons of the party.

On Wednesday, John Podesta, who held key White House roles under Presidents Bill Clinton and Barack Obama, sent a memo to every Democrat on Capitol Hill imploring them to scale back the $3.5 trillion plan in the interest of compromise, warning that doing otherwise would risk sinking both bills and costing the party control of Congress in next year’s midterm elections.

“You are either getting both bills or neither — and the prospect of neither is unconscionable,” he wrote. “It would signal a complete and utter failure of our democratic duty, and a reckless abdication of our responsibility. It would define our generation’s history and show that, when our time came, we failed, both for Americans now and in the years to come.”

Biden’s long day of meetings with lawmakers reflected a recognition that “there needs to be a deeper engagement by the president” to bring Democrats together, said Jen Psaki, the White House press secretary.

The president, she added, “sees his role as uniting and as working to bring together people over common agreement and on a path forward.”

That path is exceedingly murky as Democrats careen toward a tangle of fiscal and political deadlines with no discernible public strategy in place, but party leaders remained publicly sanguine on Wednesday.

“We are on schedule — that’s all I will say,” House Speaker Nancy Pelosi told reporters after meeting with Biden for more than an hour. “We’re calm, and everybody’s good, and our work’s almost done.”

But Democrats conceded that the process was painful.

“When you’ve got 50 votes and none to lose, and you’ve got three to spare in the House, there’s a lot of give and take — that’s just the way it is,” said Sen. Bernie Sanders, I-Vt., who is chairman of the Senate Budget Committee. “It’s tough. But I think at the end of the day, we’re going to be fine.”

At the crux of the stalemate is a leadership commitment to a group of moderate Democrats that the House would take up the Senate-passed bipartisan infrastructure bill by Monday. Liberal House Democrats say they will vote down the measure until their priority legislation first clears both the House and Senate.

Those Democrats say the infrastructure bill, which omitted most of their top priorities including major provisions to combat climate change, cannot be separated from the $3.5 trillion package, which contains many of those elements, such as a shift to electric power. Beyond the climate portions, the social policy measure would, among many other things, extend child care and child tax credits, expand free prekindergarten and community college and fortify Medicare.

But key centrists in the Senate have balked at that package, which Democrats plan to push through using a fast-track budget process known as reconciliation that shields it from a filibuster. Sens. Joe Manchin III of West Virginia and Kyrsten Sinema of Arizona both voted to begin work on a $3.5 trillion measure, but have since warned they will not support spending that much.

On Wednesday, Biden urged the holdouts to specify exactly what they would support, so Democrats could coalesce behind a plan that could pass.

“Find a number you’re comfortable with, based on what you believe the needs that we still have, and how we deliver to the American people,” Manchin said, describing the president’s request. “He was very straightforward in what he asked us to do.”

The internal disputes are escalating just as Congress is facing urgent deadlines. Without congressional action, at 12:01 a.m. next Friday, federal funding will lapse, shutting down the government. And at some point in October, the Treasury Department will reach its statutory borrowing limit, forcing it to halt some payments to international creditors, Social Security recipients and government contractors.

Amid those looming crises, Republican leaders are practically taunting Democrats, refusing to back legislation coupling a debt-limit increase and a stopgap spending measure.

“Don’t play Russian roulette with the economy; step up and raise the debt ceiling,” Sen. Mitch McConnell of Kentucky, the Republican leader, said on Wednesday, even as he vowed not to give Democrats a single Republican vote.

And House Republicans on Wednesday urged their rank-and-file members to oppose the bipartisan infrastructure bill that they said had been “inextricably linked” to the reconciliation package.

“Republicans should not aid in this destructive process,” the office of Rep. Steve Scalise of Louisiana, the No. 2 Republican, warned in a notice calling for “no” votes.

On Wednesday, a bipartisan group of former Treasury secretaries wrote to congressional leaders in both parties to express a “deep sense of urgency” to raise the debt limit. Jerome Powell, the Federal Reserve chair, offered a similar plea in a news conference.

“No one should assume that the Fed or anyone else can protect the markets and the economy, fully protect, in the event of a failure to make sure that we do pay those debts when they’re due,” he said.

Beyond that issue, Democrats must find a way to salvage Biden’s agenda. They had hoped to emerge from Wednesday’s meeting with public commitments from key moderates including Manchin and Sinema to support a reconciliation bill, but by evening they still had no such statement from the two senators.

So far, neither side is budging. Rep. Alexandria Ocasio-Cortez, D-N.Y., accused more conservative Democrats of making “impulsive and arbitrary demands,” while setting unnecessary deadlines like the Monday infrastructure vote.

“The package, the investments and the programs that we have in there are rather nonnegotiable. That’s why we are kind of at this impasse,” she said, adding, “We are at a moment, and a test of political will.”

Democrats across the ideological spectrum said forging consensus would be a tall order.

“We’ve got a hectic few days ahead,” Rep. Josh Gottheimer, a moderate from New Jersey, said after emerging from his negotiating session with Biden and other lawmakers. 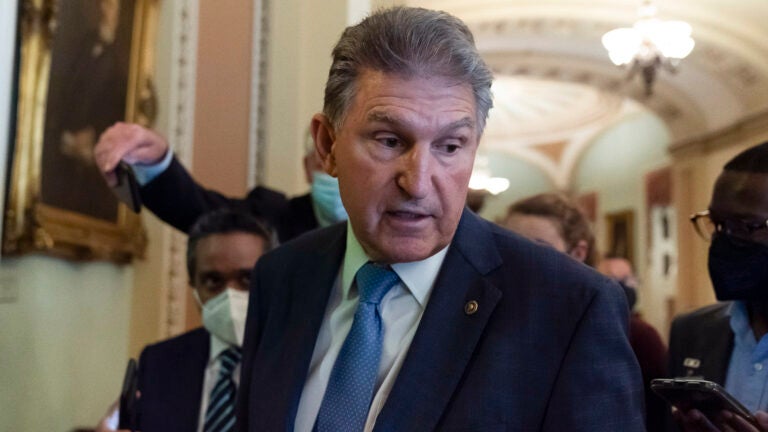