Rachael Rollins isn’t going to be confirmed as the next U.S. attorney for Massachusetts silently.

While President Joe Biden’s nominees typically go quiet as they await Senate confirmation, Rollins lit into Republican attacks on her record during a GBH radio interview Monday, after her nomination was unusually deadlocked in a Senate committee last week due to GOP opposition, forcing a full Senate vote in order to appoint her as the top federal law enforcement officer in Massachusetts.

“I refuse to be silent to benefit me,” Rollins said Monday, arguing that local crime told a different story than the one told by Republican critics.

“This is about my job,” she said. “This isn’t about U.S. attorney. This is about what I do every single day as the district attorney of Suffolk County.”

Her appearance Monday on GBH’s Boston Public Radio came after Republicans in the Senate Judiciary Committee banded together last Thursday to at least delay her confirmation as potentially the first Black woman to serve as U.S. attorney for the District of Massachusetts. The effort was led by Sen. Tom Cotton, an Arkansas Republican who is laying the groundwork for a potential 2024 presidential run, who labeled Rollins as a “radical, pro-criminal prosecutor.”

Cotton specifically took issue with Rollins’s list of low-level crimes that she pledged her office would generally decline to prosecute, which he blamed for the increase in homicides and shootings in Boston in 2020.

However, that increase, which came amid a national surge in killings, followed a 20-year low in Boston homicides in 2019, which was Rollins’s first year in office. And while the national increase in murders has continued, homicides in Boston are down again through the first nine months of 2021, according to Boston Police Department data. So were shootings and most other violent crimes.

“Boston remains one of the only — if not the only — major city in the United States of America where violent crime is down,” Rollins said Monday, calling it “astonishing” that critics could suggest otherwise.

“I wish I lived a life where I could just say something out loud, wouldn’t have to cite a single thing in support of it, and the media just gobbled it up like delicious peach cobbler,” she continued. “But for me, we have the data.”

“It’s important that we are factual,” she noted during the interview.

Rollins, who moved to Roxbury in 2018, said the subject is “deeply personal to me.”

“Why would I have wasted six months of my life to work harder than I’ve ever worked at anything in my life … to like, what? Promote lawlessness?” she asked. “I live in Suffolk County. I chose to live in the very community where the most homicides and violent crimes happen because I am so invested in making sure we change this system, and I live here with my three girls.”

Rollins noted that there is research — specifically in Suffolk County — suggesting the not prosecuting low-level crimes like shoplifting, drug possession, and minor driving offenses effectively led to lower overall crime rates. Individuals who were not charged were 58 percent less likely to return to the criminal justice system for a subsequent offense within the next two years, compared to individuals whose misdemeanors were prosecuted, the study found.

“When people say like, ‘It’s gonna be lawless,’ they’ve been saying it for years, and it just isn’t true, because guess what — the people that are being murdered and assaulted — these Part 1 crimes — overwhelmingly are the poor people of every color and people in the BIPOC community,” Rollins said. “And so those very communities want the police to be coming to their community, but they want them there for the violent crimes.”

Rollins compared the approach to how police in wealthier suburbs handle low-level offenses.

“When kids shoplift … you know what the police do? They don’t arrest them; they call their parents,” she said. “And they talk sternly to them, they don’t violate their constitutional rights, the kids go home and they end up going back to Exeter, and then Yale, and then Harvard Medical School, and now they’re doing something else or they’re working for their parent’s company, right? So, I am not saying this is lawlessness. What I’m saying is, there are other mechanisms by which we can try to cure these alleged problems or social ills.”

Rollins added that she wanted to focus on “violent, serious crimes,” noting that her office has been “fighting like hell” to successfully uphold the 2015 conviction of Edwin Alemany for kidnapping and murdering Amy Lord.

“That’s very different than being anti-law enforcement,” Rollins said. “I look at this and I say I am pro-justice.”

Rollins — whose nomination has received support from a litany of local law enforcement leaders — says she remains “optimistic” about the process moving forward.

Following the 11-11 committee vote, Democratic leaders will have to hold an additional vote in the evenly divided Senate, where she’ll need support from 50 senators. Assuming that Republicans again unanimously vote against her nomination, Rollins would need support from every single Democratic senator. 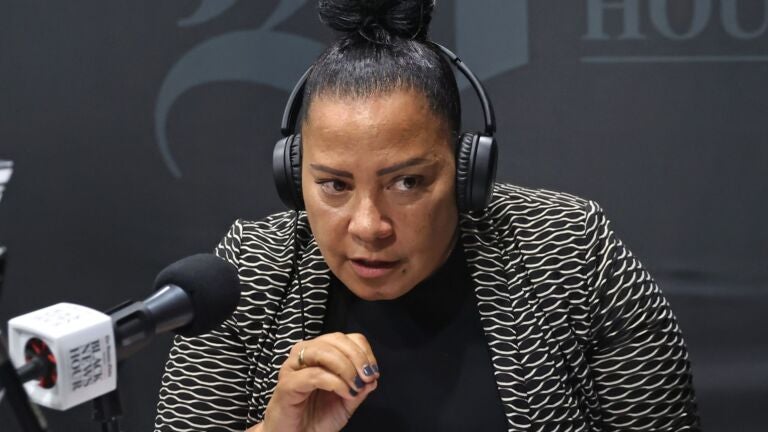