The bipartisan infrastructure bill signed into law this week by President Joe Biden promises to spread billions of dollars in new funding across the country for projects to improve transportation and water systems.

And in Massachusetts, elected officials from both political parties expect the state to get a significant boost.

“These investments are at historic numbers,” Rep. Katherine Clark, the assistant House speaker and a Melrose Democrat, said in an interview Tuesday.

Massachusetts could get well over $10 billion in funding from the $1.2 trillion bill, which includes a $550 billion increase over current spending levels.

Gov. Charlie Baker told reporters Tuesday that it will allow the state to advance some “necessary” and “overdue” projects over the next five or six years.

“We’re very excited about it,” the Republican governor said.

According to White House estimates, Massachusetts is slated to get more than $9 billion from the bill in formula funding alone over the next five years.

Specifically, those sums include:

Lawmakers say that Massachusetts could be in line for potentially billions more in competitive grants created by the bill. According to Baker, about 40 percent of the total funds available to states are through competitive grant programs.

For example, the state could apply for money from a $2.5 billion grant program for expanding electric vehicle charging stations or from a new $12 billion fund to advance intercity passenger rail projects aimed at underserved communities.

According to a spokesman, the Baker administration is in the process of conducting its own analysis on how to best use the funding. However, the governor said Tuesday that they plan to be “pretty aggressive” about bidding for the various competitive grants. Business leaders and transportation advocates have also stressed that the state needs to be proactive about competing for grants.

What sort of projects will Massachusetts advance?

The bill’s funding is slated to be spent over five years and — unlike COVID-19 relief funds from American Rescue Plan — the money is mostly funneled directly through state governments.

Lawmakers say that how exactly local residents notice the impacts on the bill will depend, in part, on where they live.

“By design, this bill has a lot of deference to state and local officials,” Auchincloss said.

For example, in the wake of the bill’s enactment, Boston city councilors announced plans Tuesday for a hearing next month to discuss expanding the city’s “insufficient” supply of electric vehicle charging stations. Sen. Ed Markey also noted that there’s money specifically dedicated in the bill for converting school buses to electric power — which was a campaign trail pledge of Mayor Michelle Wu.

Just outside of Boston in Clark’s district, the congresswoman said funding from the bill will help the city of Malden — which has the highest rate of lead pipes in the state, affecting 25 percent of water service lines — finally address the long-running problem.

“With the funding from this bill, they are going to be able to get the lead out of all the pipes,” Clark said. “That is a huge investment in a problem that has been so difficult for municipalities to tackle on their own.”

Similarly, Auchincloss points to Easton, where the funding could help the town deal with elevated PFAS chemical levels in their drinking water.

“That’s an expensive problem; that’s more expensive than one town can really solve on their own,” the Newton Democrat said. “I think the residents of Easton are going to feel the clean water infrastructure first and foremost.”

And in Franklin, Auchincloss suggested the money could target improvements to the local MBTA commuter rail line, which has struggled with reliability.

Other benefits may be distributed more broadly across the state. According to the White House, there are 472 bridges and over 1,194 miles of highway in Massachusetts that are in need of repairs. Markey’s office also says the specific grant programs could provide funding for bigger projects like replacing the aging Cape Cod bridges or passenger rail from Boston past Worcester to Springfield and Pittsfield.

Clark also noted that an estimated 137,000 people in Massachusetts still lack broadband access, which the bill’s funding aims to address.

“These are very tangible improvements,” she said.

As an older state that built much of its infrastructure ahead of other parts of the country, Auchincloss also suggested the benefits could be more pronounced. 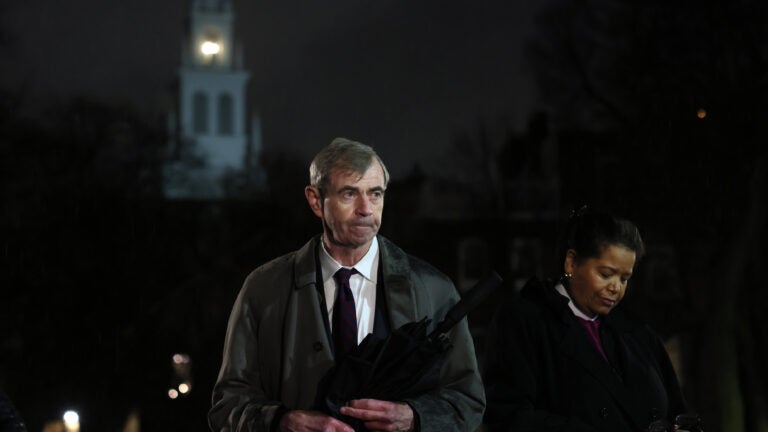