And in the final stretch of Virginia’s election for governor, stories written in Spanish accused Biden of ordering the arrest of a man during a school board meeting.

None of that was true. But such misinformation represents a growing threat to Democrats, who are anxious about their standing with Latino voters after surprise losses last year in places like South Florida and the Rio Grande Valley in Texas.

Heading into a midterm election in which control of Congress is at stake, lawmakers, researchers and activists are preparing for another onslaught of falsehoods targeted at Spanish-speaking voters. And they say social media platforms that often host those mistruths aren’t prepared.

“For a lot of people, there’s a lot of concern that 2022 will be another big wave,” said Guy Mentel, executive director of Global Americans, a think tank that provides analysis of key issues throughout the Americas.

This month’s elections may be a preview of what’s to come.

In Virginia, where Republican Glenn Youngkin campaigned successfully on promises to defend “parental rights” in classrooms, false headlines around a controversial school board meeting emerged.

“Biden ordenó arrestar a padre de una joven violada por un trans,” read one of several misleading articles, translating to “Biden ordered the arrest of a father whose daughter was raped by a trans.”

The mistruth was spun from an altercation during a chaotic school board meeting months earlier in Loudoun County that resulted in the arrest of a father whose daughter was sexually assaulted in a bathroom by another student. The father claimed the suspect was “gender fluid,” which sparked outcry over the school’s policy allowing transgender students to use bathrooms matching their gender identity.

In reality, the White House wasn’t involved with the meeting. The man was arrested by the local sheriff’s department. It’s also unclear how the suspect identifies.

Loudoun County was already the epicenter of a heated political debate over how the history of racism is taught in schools — another issue that became fodder for misinformation and political attacks on Spanish-language websites this summer, said Maria Teresa Kumar, president and CEO of Voto Latino, a nonprofit that mobilizes Hispanics to become politically engaged.

“It has everything to do with trust in institutions. Trust in government,” said Kumar, whose group works to combat the misinformation. “Eroding that trust will transfer not just to voting in the midterms, but just overall disengagement from your government.”

Stretched truths accusing some Democrats of being socialists or communists could also dominate the online narrative, said Diego Groisman, a research analyst at New York University’s Cybersecurity for Democracy project.

During the 2020 election, Groisman flagged Facebook ads targeting Latino voters in Texas and Florida that described Biden as a “communist.” The ads in Florida — where a majority of the country’s Venezuelan population is concentrated — compared Biden to that country’s socialist President Nicolás Maduro.

“There were clearly specific Spanish-speaking communities that were being targeted,” said Laura Edelson, the lead researcher for NYU’s program.

One conspiracy theory mentioned on talk radio grew out of Lady Gaga’s golden bird brooch at Biden’s inauguration. Some spreading the claim noted a similar brooch once worn by Claudia López Hernandez, the first openly gay mayor of Bogota, Colombia, signaled the new president was working with foreign leftists.

“They’re not going to stop. They’re going to double down on it,” Pérez-Verdía said of the misinformation.

Facebook’s own documents, leaked by ex-Facebook employee turned whistleblower Frances Haugen earlier this year, echo those concerns. Haugen said the company spends 87% of its misinformation budget on U.S. content — a figure that Meta spokesperson Kevin McAllister said is “out of context.”

An internal Facebook memo, written in March, revealed the company’s ability to detect anti-vaccine rhetoric and misinformation was “basically non-existent” in non-English comments.

Last year, for example, Instagram and Facebook banned “#plandemic,” a hashtag associated with a video full of COVID-19 conspiracy theories. Yet users were spreading misinformation on the platforms using “#plandemia,” the Spanish version of the hashtag, until just last month.

An analysis last year by Avaaz, a left-leaning advocacy group that tracks online misinformation, also found Facebook failed to flag 70% of Spanish-language misinformation surrounding COVID-19 compared to just 29% of such information in English.

Meanwhile, researchers at the nonpartisan Global Disinformation Index estimated that Google will make $6 million this year off ads on websites that peddled COVID-19 disinformation in Spanish. Google has “stopped serving ads on a majority of the pages shared in the report,” company spokesperson Michael Aciman said in an email.

That explosion is fueled in part by a U.S.-Latin America feedback loop that allows falsehoods to fester.

Misinformation that starts on U.S. websites is sometimes translated by social media pages in Latin American countries like Colombia and Venezuela. The inaccuracies are shared back through YouTube videos or messaging apps with Spanish speakers in expatriate communities like those in Miami and Houston.

Those falsehoods are more likely to reach U.S. Latinos because they tend to spend more time on sites such as YouTube, WhatsApp, Instagram and Telegram, according to an October Nielsen report.

“We see YouTube accounts or radio stations churning out mis- or disinformation regarding a whole range of things that they pick up from fringe U.S. outlets,” Mentel said.

Some are working to fill the void of reliable information in those communities.

The Oakland, California, news service El Timpano delivers a text message of local news in Spanish to roughly 2,000 subscribers every week. Subscribers can text back with questions that staffers work to answer, said Madeleine Bair, who launched El Timpano.

The news service has fielded more than 1,500 questions over the past year, including ones about hoax COVID-19 cures.

“We really ramped up because it was clear that the communities we were serving were most in need of basic public health information,” Blair said, “and that information wasn’t reaching them.”

Others have urged the government to take on a watchdog role. Federal Trade Commission commissioner Rebecca Kelly Slaughter, a Democrat, said the regulator may look at disparities in how Big Tech monitors English-language disinformation compared to other languages.

“The first thing I think we need to do is investigate,” Slaughter said during a November panel with lawmakers.

This story was first published on November 29, 2021. It was updated on December 1, 2021, to correct that researchers at the nonpartisan Global Disinformation Index estimated that Google will make $6 million this year, not $12 million, off ads on websites that peddled COVID-19 disinformation in Spanish. 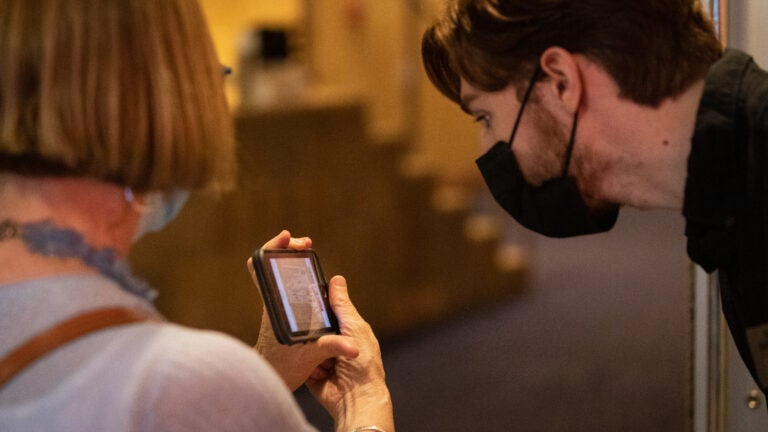