It began last fall as an ironic, profane joke after a NASCAR race. Now, it’s showing up in campaign ads.

Jim Lamon, a Republican candidate for Senate in Arizona, has a new television advertisement that employs the slogan “Let’s go, Brandon.” His campaign says it is spending $1 million to air the ad, including during local broadcasts of Monday night’s college football championship.

As far as we can tell, it’s the first instance of this three-word catchphrase being used in a campaign spot, and that makes it worth unpacking. It says something important about what Republican politicians think animates their primary voters.

For those unfamiliar, “Let’s go, Brandon” is code for an insult to President Joe Biden, in place of a four-letter expletive — a widespread in-joke among Republicans.

The phrase was even used for a bit of Christmas Eve trolling of Biden and the first lady, while they fielded a few calls to the NORAD Santa Tracker in what has become an annual White House tradition.

At the end of an otherwise cordial call with a father of four from Oregon, Biden said, “I hope you have a wonderful Christmas.”

“I hope you guys have a wonderful Christmas as well,” replied the caller, later identified as Jared Schmeck, a Trump supporter. He added: “Merry Christmas and ‘Let’s go, Brandon!’”

In Arizona, Lamon, a businessman who is running in a crowded primary field, has pledged to spend $50 million of his money.

Thus the new ad. “If you are pissed off about the direction of our country, let’s go,” Lamon begins, as action-movie-style music plays in the background. “If you’re ready to secure the border and stop the invasion, let’s go. If you want to keep corrupt politicians from rigging elections, let’s go.”

“Let’s take the fight to Joe Biden, and show him we the people put America first,” Lamon continues, deadly serious in tone. “The time is now. Let’s go, Brandon. Are you with me?”

It’s a marked contrast from Lamon’s gauzy biography ad, which introduces him as a genial military veteran who was able to go to college thanks to an ROTC scholarship.

The new ad comes days ahead of a much-anticipated rally by Donald Trump in Florence, Arizona, a town of 25,000 people between Phoenix and Tucson.

Trump has yet to back a candidate, but his imprimatur could be decisive. He has all but made embracing his false claim that the 2020 election was stolen an explicit condition for his endorsement, and Saturday’s rally will feature a number of prominent election deniers.

“Everybody is running to the right and trying to express their fealty to Donald Trump,” Mike O’Neil, an Arizona political analyst, said of the new Lamon ad. “This is his attempt to break through.”

Lamon’s ad isn’t even the most striking video of the Senate primary in Arizona.

In mid-October, the state attorney general, Mark Brnovich, the closest thing to an establishment candidate in the Senate race, posted a video of himself twirling nunchucks. “People, you want more chucks, you got more chucks,” Brnovich says.

The display was widely ridiculed as a desperate plea for attention. Brnovich has struggled to capture the imagination of primary voters — many of whom fault him for not doing enough to prevent Biden’s win in Arizona in 2020 — leaving the race wide open.

In November, Blake Masters, a 35-year-old Stanford-educated lawyer and venture capitalist backed by Peter Thiel, a Silicon Valley billionaire close to Trump, introduced a video of his own that drew national attention for its unusually stark advocacy of Second Amendment rights.

In that ad, Masters squints into the camera while cradling a futuristic-looking gun called the “Honey Badger.” “This is a short-barreled rifle,” he intones. “It wasn’t designed for hunting. This is designed to kill people.”

Clad in a long-sleeve black T-shirt emblazoned with the word “DROPOUT,” Masters goes on to explain his reasoning, as ominous-sounding music plays in the background.

“If you’re not a bad guy, I support your right to own one,” he says. “The Second Amendment is not about duck hunting. It’s about protecting your family and your country.

“What’s the first thing the Taliban did when Joe Biden handed them Afghanistan?” Masters continues, before lowering his voice to barely more than a whisper. “They took away people’s guns. That’s how it works.”

The 50-second Masters spot did not run on TV, but was viewed at least 1.5 million times on Twitter, generating media coverage and buzz on the right for its unapologetic defense of a weapon that is seen as especially dangerous by gun control advocates.

“What was more interesting, in a way, was how much it freaks the left out,” Masters said in an interview, reflecting on the reaction to the ad among liberals. He said he welcomed the opprobrium: “Bring it on.”

He noted that when he was working on his biographical ad, introducing himself as an Arizona native, he decided not to lean too heavily on his record as an entrepreneur, and to talk about his values instead.

“Dude, nobody cares,” he said. “Nobody cares about your solar company.”

Sen. Mark Kelly, the Democratic incumbent, will be a formidable and well-funded opponent for whoever wins the GOP primary, which is not until August. And Trump’s support could become a liability in a general election.

O’Neil noted that many conservative women in the suburbs voted for Biden in 2020 but opted for Republican candidates elsewhere on the ballot.

But Masters argued that there’s no downside to running to the right.

“The way you win a swing state in Arizona is not by focus-grouping,” he said. “It’s by truly being conservative, and being bold by articulating conservative ideas.”

Mike Murphy, a prominent Trump critic and longtime adviser to Arizona Sen. John McCain, who died in 2018, said the Lamon ad was a “sign of the sad times in U.S. politics.”

But, he quipped, “in the GOP primary electorate this year, who the Brandon knows.” 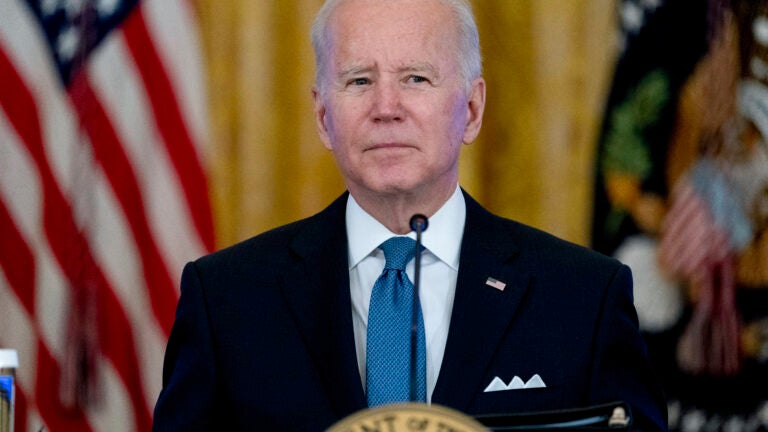