NEW YORK (AP) — New York City’s mayor exempted athletes and performers — including Brooklyn Nets star Kyrie Irving — from the city’s vaccine mandate Thursday, while keeping the rule in place for private and public workers who risk losing their jobs for refusing to get inoculated.

Several public employees unions whose members were fired for refusing the shots blasted Mayor Eric Adams for apparently lifting the rule only for wealthy and famous athletes. Adams dismissed the criticism, saying exemptions for athletes and performers were important to the city’s economic recovery.

The exemption is effective immediately. One of the first beneficiaries will be Irving, a vaccine holdout who was allowed to rejoin the Nets in January but only when they played out of town games. The Nets need him as they push for a playoff spot with nine games left in their regular season.

Adams’ predecessor, Mayor Bill de Blasio, made vaccination mandatory as a workplace safety rule last year before he left office but created a loophole exempting players and performers who aren’t based in New York City. Adams said he felt that was unfair.

“Players attract people to the stadium,” Adams remarked as he announced the change during a news conference at Citi Field, where the Mets play. Accompanying him were Mets President Sandy Alderson and Yankees president Randy Levine, both of whom praised the decision.

“By putting our home teams on (an) equal playing field, we increase their chances of winning and that has a real impact on our city,” he said.

“There can’t be one system for the elite and another for the essential workers of our city,” said Harry Nespoli, president of the Municipal Labor Committee, an umbrella group of unions that together represent about 350,000 city workers.

The city’s largest police union echoed that argument, saying its officers “don’t deserve to be treated like second-class citizens.”

“If the mandate isn’t necessary for famous people, then it’s not necessary for the cops who are protecting our city in the middle of a crime crisis,” said union president Pat Lynch.

The city last month fired more than 1,400 workers who failed to comply with the vaccine mandate. Adams said Thursday that he had no plans at this time to rehire those workers.

“This exemption sends the wrong message that higher-paid workers and celebrities are being valued as more important than our devoted civil servants, which I reject,” said City Council Speaker Adrienne Adams, who is not related to the mayor.

Jay Varma, a health adviser to de Blasio, said in a tweet that the former mayor’s mandate had legal standing because it applied to everyone.

“#VaccinesWork … unless you’re rich and powerful, in which case, #LobbyingWorks,” Varma said. He added: “The #KyrieCarveOut opens City up to entire scheme being voided by courts as “‘arbitrary and capricious.’”

Adams said he would not have made the change if city attorneys had advised him it wouldn’t stand up to a legal challenge.

The NBA and the players union issued a joint statement praising Adams’ decision.

“We applaud the mayor for listening to the concerns of our New York teams, players, fans and communities and for leveling the playing field for home teams and their opponents,” the statement said.

Alderson and Levine have declined to specify how many of their players were unvaccinated. Alderson said Thursday that it was “a minority” and Levine said “very few.”

Yankees star Aaron Judge refused to directly answer a question about his vaccine status earlier this month, leading to speculation that another New York team would be hobbled by a player’s refusal to get inoculated.

When asked Wednesday about reports that the vaccine mandate for athletes was about to be lifted, Judge said he was “happy Kyrie can play some home games.”

The Yankees open their season at home against the Boston Red Sox on April 7.

Adams has been rolling back other coronavirus restrictions, including on Tuesday when he said masks could become optional for children under 5 starting April 4.

Mask mandates for older children have already been removed, as have rules requiring people to show proof of vaccination to dine in a restaurant, work out at a gym, attend a show, or go to an indoor sporting event. 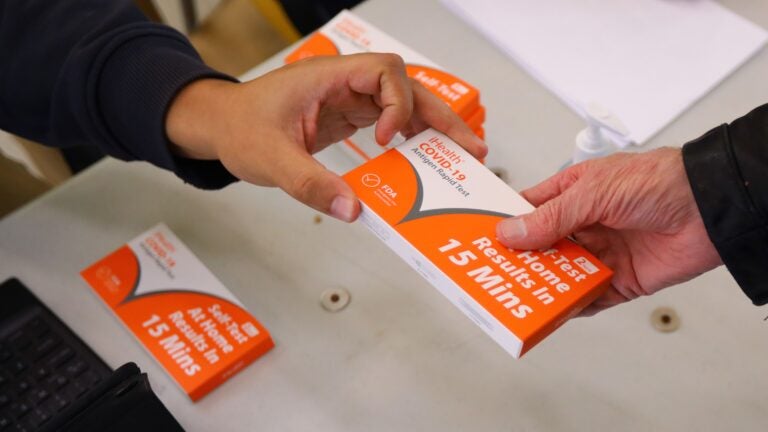 How COVID did away with the sick day