Lawyers for OxyContin maker Purdue Pharma and many of those who had claims against the company over the toll of opioids joined together Friday to urge a federal judicial panel to allow a plan that would settle lawsuits across the country.

The legal question facing the judges from the 2nd U.S. Circuit Court of Appeals in New York: Does a bankruptcy judge have the authority to grant members of the Sackler family who own the company protection from civil lawsuits over the toll of opioids?

Sackler family members have insisted on the legal shield in exchange for providing the money behind the proposed settlement. And as their offer was boosted over more than two years of negotiations and mediation, most of the parties came to support the deal — including all the states.

But the U.S. Bankruptcy Trustee’s Office, an arm of the Justice Department, has continued pushing back, asserting it’s improper to provide a legal shield for members of the wealthy family who have not themselves filed for bankruptcy protection.

“A non-debtor says: ‘I can get the benefit of a discharge but I don’t need to comply with any of the rules of the bankruptcy code and I don’t need to contribute all of my assets,’” Michael Shih, a lawyer for the office, told a three-judge panel of the 2nd Circuit in a hearing Friday in New York City. “That’s the fundamental inconsistency here.”

Lawyers for Purdue and others who support the settlement said that the protections for Sackler family members would be limited to cases involving opioids and are needed to get a fair outcome, rather than seeing the fight continue through many trials all over the country.

“The releases at issue are not only important to the plan, they are absolutely essential,” said Mitchell Hurley, a lawyer for the official committee of unsecured creditors in Purdue’s bankruptcy case told the judges.

Purdue lawyer Marshall Huebner pointed out that, unlike other parties, the Bankruptcy Trustee’s office and federal government are not in line to receive any money from the settlement. He told the judges that allowing lawsuits against the Sacklers to move forward might not result in more money to fight the opioid crisis — in part because most of the family’s wealth is in trusts, much of it overseas.

“We are bringing in billions and billions of dollars to save lives,” Huebner told the court.

All three judges asked pointed questions on the positions of both Huebner and Shih.

The 2nd Circuit judges did not indicate when they would rule, but it often takes weeks or months after a hearing.

No matter how the 2nd Circuit rules on the case, an appeal to the U.S. Supreme Court is possible. If Purdue and its allies win, they still must go back to the bankruptcy judge to get the latest version of the deal approved.

Under the planned deal, Sackler family members would contribute $5.5 billion to $6 billion over time, plus give up ownership of the company. Purdue would then become a new entity known as Knoa Pharma that would dedicate its profits to fighting the nation’s opioid epidemic.

Most of the Sacklers’ money also would go to fighting the epidemic, but at least $750 million would be distributed to some individual victims and their families.

Other product-liability cases have been settled through bankruptcy court by using the sort of protections this deal would give the Sacklers. But opponents of the settlement are challenging the strategy based on the fact that a handful of parties still object to the deal.

Almost all the governments and other entities that originally sued Purdue have agreed to the settlement. Besides the bankruptcy trustee, the only official objectors left are Canadian local governments and First Nations, and two mothers of sons who died of opioid overdoses.

This week, more than 1,000 families who have lost loved ones to overdoses sent a letter asking the U.S. Justice Department to drop its opposition. They said individual victims would not receive payments if the settlement is derailed.

One of the letter-signers is Chery Juaire of Marlborough, Massachusetts, who lost two adult sons to overdoses. She said Friday that she hopes the court clears the way for the settlement — and that the Justice Department stops fighting against it.

“We just hope the judges agree with our position and hope they rule soon,” she said, “because lives are at stake.”

The federal judge overseeing Purdue’s bankruptcy case approved a settlement last year that was later rejected on an appeal brought primarily by attorneys general for eight states and the District of Columbia. The sides then went to mediation that ultimately persuaded the Sacklers to increase their contribution by more than $1 billion.

Purdue is perhaps the highest-profile player in the opioid industry. But several other drugmakers, distribution companies and pharmacies also have been sued by state and local governments. While a handful of cases have gone to trial, many also are being settled.

Earlier this year, drugmaker Johnson & Johnson and distribution giants AmerisourceBergen, Cardinal Health and McKesson finalized deals to provide a total of $26 billion. Most of the money is required to be used to fight the opioid crisis, which has been linked to more than 500,000 deaths in the U.S. over the last two decades. 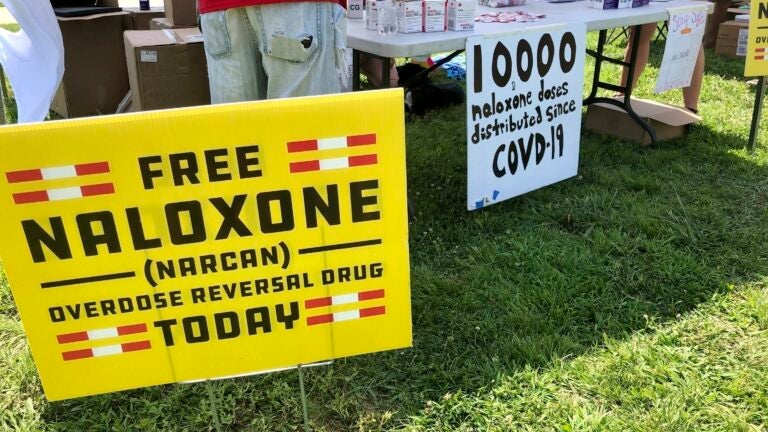 Where do U.S. opioid trials, settlements stand? Here's what to know.