U.S. District Judge Timothy J. Kelly of Washington delivered a thorough victory to the House select committee, tossing out the RNC’s claims that its and the Trump campaign’s information was protected on grounds including the First Amendment and ruling that under the Constitution’s grant of legislative powers to Congress and the speech-or-debate clause, judges cannot interfere with how lawmakers obtain and use information.

Kelly also dismissed the RNC’s claims against Salesforce — the business software giant used by the RNC and Trump’s reelection campaign — after the company and committee significantly narrowed the list of disputed records at issue, for example dropping demands for any information that would reveal the identities of individual political donors. Kelly temporarily barred Salesforce from releasing any records to the House before Wednesday to give the national GOP committee time to appeal.

“It is hard to imagine a more important interest for Congress than to preserve its own ability to carry out specific duties assigned to it under the Constitution,” Kelly wrote in a 53-page opinion issued shortly before midnight. “To repeat: according to the Select Committee, its investigation and public reporting suggest that claims that the 2020 presidential election was fraudulent or stolen motivated some who participated in the attack, and emails sent by the RNC and the Trump campaign using Salesforce’s platform spread those claims.”

The Republican National Committee sued on March 9 after the House panel issued a subpoena to Salesforce on Feb. 23 and said it was investigating whether the RNC and Trump campaign solicited campaign donations from Nov. 3, 2020, to Jan. 6, 2021, by pushing false and inflammatory claims of election fraud. The select committee said it wanted to understand the flow of funds and whether they went to their stated purpose.

Salesforce publicly announced that it had “taken action” against the RNC, a longtime customer, to “prevent its use of our services in any way that could lead to violence” after the Jan. 6 rioting against Congress as lawmakers met to certify President Biden’s election victory.

In court, House General Counsel’s Office attorney Eric Columbus argued, “Salesforce had reason to believe its platform had been used to fan the flames that generated January 6. . . . The committee wants to know what work product led them to believe that.”

The joint effort by the RNC and Trump campaign sent hundreds of emails between Election Day and Jan. 6 to hundreds of thousands of recipients, typically repeating unfounded claims that Democrats had stolen the election and urging donors to contribute, the committee said. For example, an email sent an hour before police lines at the Capitol were breached that day urged supporters to “FIGHT BACK,” under another header stating, “This is our LAST CHANCE.”

The RNC urged the judge to toss the subpoena, blasting the requests as overbroad, without valid legislative purpose and a thinly veiled attempt at political espionage.

RNC attorney Christopher O. Murray asserted that the national GOP’s greater effectiveness at digital fundraising in recent years comes from how it breaks down and organizes how groups of email recipients perform, and that such closely held proprietary information would quickly be leaked by Congress to its national Democratic counterparts.

For a congressional committee controlled by one of the nation’s two major political parties to use its legislative power to reveal the strategies and internal deliberations of the other party, Murray said, “Candidly, your honor, that’s a scandal.”

“Our trade secrets are how we effectuate our First Amendment rights” of free speech and political association, Murray said in fast-tracked oral arguments April 1, adding, “How we try to win elections is our secret sauce. . . . That’s what I think the congressional committee truly wants.”

In his opinion, Kelly, a 2017 Trump appointee, ruled that under the required balancing test, the subpoena was narrowly tailored to meet Congress’s “uniquely weighty” and “vital interest” in a thorough investigation of the Jan. 6 attack, and he called many of the RNC’s concerns overstated or speculative.

“The House instructed the Select Committee to ‘investigate and report upon the facts, circumstances, and causes relating to’ the January 6 attack, including ‘the influencing factors that fomented’ it. And it empowered the Select Committee to investigate ‘how technology . . . may have factored into the motivation’ for the attack, including by examining the roles of any relevant ‘public and private’ entities,” Kelly wrote.

“The subpoena does not violate the First Amendment, in part because of the limited materials at issue,” Kelly ruled, adding, “Knowledge of the causes of the attack will make [the panel] ‘better able to fulfill its responsibility’ of providing well-informed recommendations to the House for remedial measures to avert a future attack.”

Salesforce did not take sides in the dispute. However, its attorneys said the company could comply with requests without disclosing any personally identifiable information about email recipients or their contributions; information deemed confidential under its contract with the RNC; and analyses constituting the work of its own attorneys.

Kelly agreed that the House committee’s dive into data held by the RNC’s marketing vendor created the “exceedingly rare spectacle of a congressional committee subpoenaing the records of one of our country’s two major political parties.”

But the judge said that information about the pace and content of its mass emails is already collected in online databases, and that the RNC had provided no basis for him to find that subpoena would unearth sensitive email discussions by employees, internal RNC memorandums about its digital strategy, or information that would permit a political competitor to piece together a “mosaic” of its email strategy.

“Obviously, information that shows which email campaigns attracted more attention, and which attracted less, has some strategic value,” Kelly wrote. “But on the record here, whatever competitive harm may come to the RNC from disclosure of the actual material at issue is too ‘logically attenuated’ and ‘speculative’ to defeat the Select Committee’s weighty interest.”

The House committee sought five sets of records, including how Salesforce analyzed the use of its platforms by the RNC and Trump campaign leading up to Jan. 6 and what the three said about their continued use.

More broadly, the House, after consultation with Salesforce, said it sought logs of how and which campaign or RNC officials directed the small-donor appeals. Lawmakers also asked for “all performance metrics and analytics” of how the Trump campaign, RNC and Trump Make America Great Again Committee reached supporters, such as how often emails were sent; how often they bounced back; how often recipients clicked on, opened, or otherwise engaged with solicitations; and when and how much time they spent interacting.

In his ruling, Kelly said the RNC’s challenge to the validity of the Jan. 6 committee’s legislative authority was rejected by the Supreme Court in January when it sided with the panel and denied Trump’s request to halt the release of some of his White House records.

The judge applied an “exacting scrutiny” test to the House’s request for information related to the First Amendment, saying it was comparable to the RNC’s demand that Congress’s subpoena to a national political party’s marketing and fundraising vendor should be “narrowly-tailored” and handled by the courts like congressional and New York investigators’ demands for then-president Trump’s personal records held by his accounting firm, Mazars USA, and Deutsche Bank.

RNC attorney Murray urged Kelly to apply the same reasoning as Supreme Court Chief Justice John G. Roberts Jr. did in a landmark ruling in 2020, when he upheld Congress’s authority generally to issue subpoenas for a president’s personal financial records but ruled that they must be “no broader than reasonably necessary.”

In this case, Murray urged Kelly to similarly shield a national political party’s constitutionally protected data, which he said could reveal its strategies and internal deliberations, exercises of the rights of free speech and association.

In court filings, attorneys for the House, led by Letter, said the information sought “may assist the Select Committee in assessing the types and quantities of mass email campaigns to target in any potential legislation to combat dangerous political disinformation.”

“Investigating the connection that Salesforce saw between these fundraising emails and violence is critical to the Select Committee’s work,” Letter argued. Committee investigators are also seeking who wrote and approved the small-donor appeals. 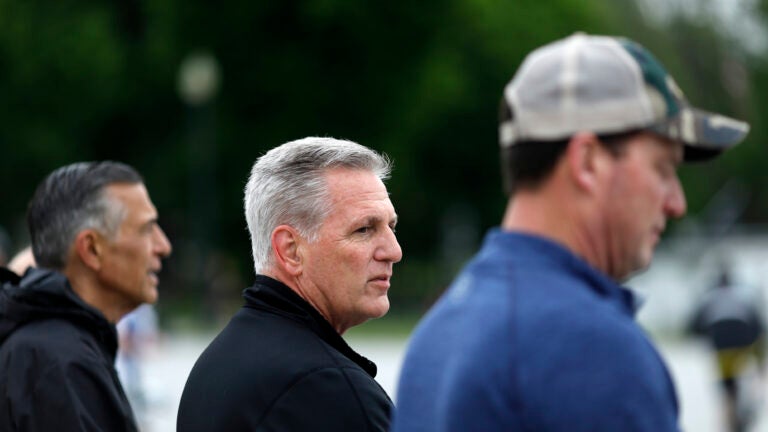 A year later, some Republicans second-guess boycotting the Jan. 6 panel