NEWTOWN, Conn. (AP) — As the mother of a girl killed at Sandy Hook, Michele Gay was devastated by the massacre at a Texas elementary school, with its aching parallels to the 2012 attack in Connecticut.

It was all the more saddening in light of the work she has invested in the years since to promote school safety.

“This one has been particularly devastating for me, for my family, for our community, Sandy Hook. We’re just literally transported back in time,” said Gay, co-founder of the nonprofit Safe and Sound Schools. “I’ve got to dig deep. I’m not going to lie.”

In the decade since 20 children and six educators were killed at Sandy Hook Elementary, some of their loved ones who channeled grief into advocacy have claimed success, gradually, in areas including gun safety, attitudes around gun violence, and mental health awareness. The attack in Uvalde has tested their resolve like no other.

Like the Newtown gunman, the attacker in Texas was a young man who shot an older family member he lived with before opening fire with an AR-15-style semi-automatic rifle inside a nearby elementary school, slaughtering small and defenseless children.

As details of Tuesday’s shooting emerged, Matt Vogl was texting with Jennifer Hensel, whose daughter Avielle was killed in Newtown, and others involved in an advocacy effort named in the girl’s honor, the Avielle Initiative, which promotes efforts to make mental health care more widely available through technology.

“We were all just crying and texting. It’s brutal because it triggers some of the darkest memories we have,” said Vogl, executive director at the National Mental Health Innovation Center in Colorado, where the program is based. The effort was launched after the Newtown attack by Hensel and her husband, Jeremy Richman, who died by suicide in 2019.

“If I can’t stay optimistic I need to quit and find something else to do. On days like today it’s all you got. The vast majority of people don’t go into schools and shoot them up,” Vogl said.

In the first months after the Newtown shooting, much of the families’ advocacy work centered on gun control, particularly a failed effort in 2013 to get a federal law banning some semi-automatic weapons and expanding criminal and mental background checks for gun purchases.

One of the best known groups, Sandy Hook Promise, pivoted afterward to campaigns that helped pass state laws limiting sales of some guns and, more recently, to community-based prevention programs.

There have been victories. Trainings offered to schools by Sandy Hook groups have been credited with stopping potential suicides and school shootings. Victims’ families have prevailed in legal fights with conspiracy theorists and a lawsuit against gun-maker Remington that held the company responsible for its marketing of military-style rifles like those used in the Newtown and Uvalde attacks.

For Mark Barden, a co-founder of Sandy Hook Promise, the Texas shooting was all the more frustrating because of everything that has been learned about how looking out for warning signs can prevent such tragedies.

“Today it’s hard because my mind is with with these families in that community,” said Barden, whose son Daniel was killed in the Sandy Hook shooting. “But I do have to buoy myself from crashing because I know that we have something here that works.”

Gay, whose group works with schools around the country, said it was disheartening to hear indications that signs might have been missed in the Texas case.

“Already it appears there were numerous red flags, numerous changes in his behavior over the last year of his life, social media postings that were opportunities to report and then provide intervention,” she said. “That’s hard.”

Survivors of the Newtown shooting where among those expressing outrage.

Mary Ann Jacob, a former Sandy Hook library clerk, was huddled in a closet with 18 children during the 2012 shooting.

“Yesterday, I was right back in that closet, remembering the fear and horror we experienced, trying to be brave for the kids we were with, while we were more frightened than we’d ever been in our lives,” she said Wednesday during an appearance with Connecticut’s governor in Hartford. “Once again, gun violence has forced its way into our schools, leaving nothing but devastation, trauma and tragedy in its wake.”

Schools across Newtown had a stepped-up police presence on Wednesday and Superintendent Lorrie Rodrigue said counselor teams were on alert for students who might be traumatized by the news from Texas, including high school students who survived the Sandy Hook shooting.

“In just visiting today, it was very obvious that staff were right there to support their students, especially those at the high school who were at Sandy Hook,” she said.

Although Congress hasn’t passed a meaningful gun control law since the Newtown attack, Erica Lafferty, the daughter of Dawn Lafferty Hochsprung, the slain principal of Sandy Hook, pushes back on those who say nothing has changed since Sandy Hook. A program manager at Everytown for Gun Safety and an advocate for universal background checks, she said gains have been made quietly in states around the country.

“That is absolutely not something that I see stopping. I do hope that this is an eye opener, as Sandy Hook was, for a push on the federal level,” she said. “But what that’s going to be? Your guess is as good as mine.” 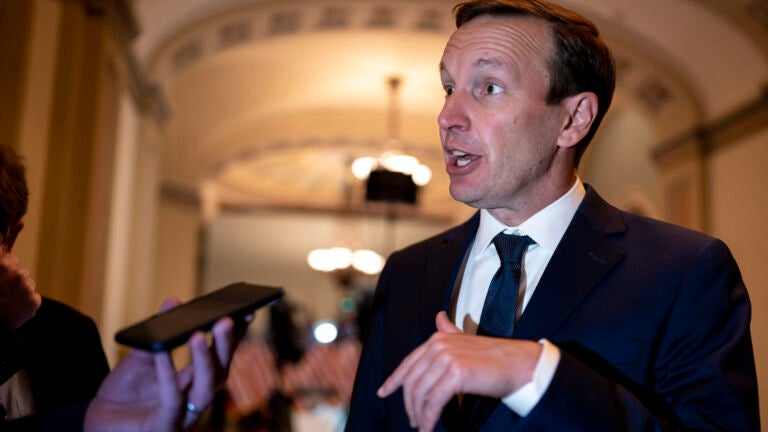