At the heart of the Jan. 6 committee’s presentation Thursday night was a gripping story with a sprawling cast of characters, but only three main players.

One was Donald Trump, a defeated president desperate to remain in office and unwilling to call off the rioters assaulting the Capitol in his name despite knowing that his claims of election fraud were baseless.

Another was the Proud Boys, the most prominent of the far-right groups that helped to instigate and lead the assault on the Capitol.

And the last was a Capitol Police officer who stood in for all the men and women who sought to defend Congress in the midst of what she described as “carnage” and “chaos” and often suffered grievously in the process.

The narrative the committee laid out to a national audience on prime-time television sought to draw a series of sharp distinctions: most notably between a president who watched on television as the riot raged and told aides that his vice president, Mike Pence, deserved the chants from supporters calling for him to be hanged, and the Capitol Police officer, Caroline Edwards, who was pounded unconscious as the Proud Boys mounted their attack.

Trump, the committee established through snippets of testimony, had been informed directly by his attorney general and other aides that there was no evidence of the fraud he had claimed had cost him his election. Even Trump’s daughter Ivanka came to reject his lies about the election having been stolen.

Trump also refused to intervene as the rioting got out of control, and he never gave an order to deploy the National Guard. His unyielding efforts to hold on to the presidency despite his loss were matched in the committee’s telling by the organized and determined efforts by the Proud Boys and other groups like the Oath Keepers, who felt they had been summoned to Washington by Trump to fight on his behalf.

Rep. Liz Cheney, R-Wyo., who is serving as the committee’s vice chair, said in an opening statement that the “pivotal movement” in the runup to the Capitol attack was a Twitter post from Trump in December 2020 calling on his supporters to come to Washington for a “wild” rally on Jan. 6.

“President Trump summoned the mob, assembled the mob and lit the flame of this attack,” Cheney said.

To personalize the costs of the attack, the committee presented Edwards, who was brutally assaulted as she tried to hold off the initial breach of the Capitol grounds, an incident captured on video played by the panel. Despite being knocked out, she testified, she got back up and rejoined the fight, which she described horrifically as “slipping in people’s blood.”

The committee also played portions of videotaped interviews with some of the rioters themselves, who acknowledged they had gone to Washington on Jan. 6 in answer to Trump’s call.

“I remember Donald Trump telling people to be there,” said George Meza, a member of the Proud Boys who gave a deposition to the committee but has not been charged in the attack.

Those who responded most forcefully to Trump’s Twitter post were members of far-right groups like the Proud Boys and the Oath Keepers militia. The leaders of both organizations — and several of their members — have been charged with seditious conspiracy.

Referring to Trump’s post as “a call to arms,” Marcus Childress, a committee investigator, noted in one of the committee’s videos that within days of it being posted, leaders of the Proud Boys had created a “command structure” and set up an encrypted group chat called the Ministry of Self Defense.

Childress also said that a Florida leader of the Oath Keepers responded to the post by sending a message to his compatriots saying, “The president called us to the Capitol. He wants us to make it wild.”

Unlike many of their fellow Trump supporters, the Proud Boys did not show up for Trump’s address near the White House on Jan. 6. Instead, they assembled at the Washington Monument around 10 a.m., according to one of the committee’s live witnesses, Nick Quested, a documentary filmmaker who was embedded with the group that day.

About 200 members of the group gathered that morning, Quested said, and marched through the city streets, arriving at the Peace Circle on the west side of the Capitol at shortly before 1 p.m., just minutes before lawmakers inside the building were set to begin a ceremonial proceeding to certify the election. Quested said he was surprised by the Proud Boys’ anger and profanity as the larger crowd around them turned, as he put it, “from protesters to rioters to insurrectionists.”

Another witness at the Peace Circle was Edwards, who testified about being in the middle of the first breach of the Capitol grounds. Edwards described how a Proud Boys leader named Joseph Biggs encouraged another man to approach the bike rack barricade where she was posted. That man, Ryan Samsel, she said, pushed the bike rack over, causing her to hit her head and lose consciousness.

But before she blacked out, Edwards recalled seeing “a war scene” playing out in front of her. Police officers were bleeding and throwing up, she recalled.

Reprising the theme of the police standing up to defend democracy that day while Trump did nothing to call off the mob he had incited, Rep. Bennie Thompson, D-Miss. and the chairman of the committee, apologized to Edwards for the ordeal she suffered.

“It is unfortunate that you had to defend the Capitol from fellow Americans,” Thompson said.

Even as all of this was unfolding, Trump, watching from the White House, believed his supporters in the mob were “doing what they should be doing,” Cheney said.

Trump, Cheney added, made no effort to reach out to defense officials or officials at the Justice Department to help quell the attack.

When his advisers told him he “needed to be doing something more,” the president grew angry, she asserted. When the advisers informed Trump that his supporters wanted to hang Pence, Trump responded that Pence “deserves it,” Cheney said.

In one of the most shocking contrasts of the evening, the committee played a videotape of the violent mob, roaming and ransacking the Capitol, overlaid with an audio clip of Trump describing the day in a manner that was almost surreally detached from reality.

“The love in the air,” Trump could be heard to say over images of nearly medieval chaos. “I’ve never seen anything like it.” 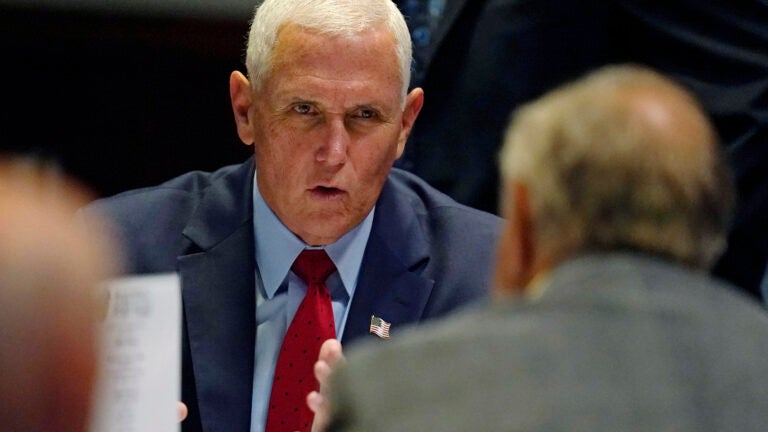