John Eastman, a conservative lawyer whose plan to block congressional certification of the 2020 election failed in spectacular fashion Jan. 6, 2021, sent an email two weeks later arguing that pro-Trump forces should sue to keep searching for the supposed election fraud he acknowledged they had failed to find.

On Jan. 20, 2021, hours after President Joe Biden’s inauguration, Eastman emailed Rudy Giuliani, former President Donald Trump’s personal lawyer, proposing that they challenge the outcome of the runoff elections in Georgia for two Senate seats that had been won Jan. 5 by Democrats.

“A lot of us have now staked our reputations on the claims of election fraud, and this would be a way to gather proof,” Eastman wrote in the previously undisclosed email, which also went to others, including a top Trump campaign adviser. “If we get proof of fraud on Jan. 5, it will likely also demonstrate the fraud on Nov. 3, thereby vindicating President Trump’s claims and serving as a strong bulwark against Senate impeachment trial.”

The email, which was reviewed by The New York Times and authenticated by people who worked on the Trump campaign at the time, is the latest evidence that even some of Trump’s most fervent supporters knew they had not proved their baseless claims of widespread voting fraud — but wanted to continue their efforts to delegitimize the outcome even after Biden had taken office.

Eastman’s message also underscored that he had not taken on the work of keeping Trump in office just out of conviction: He asked for Giuliani’s help in collecting on a $270,000 invoice he had sent the Trump campaign the previous day for his legal services.

The charges included $10,000 a day for eight days of work in January 2021, including the two days before Jan. 6 when Eastman and Trump, during meetings in the Oval Office, sought unsuccessfully to pressure Vice President Mike Pence to go along with the plan to block congressional certification of the Electoral College results Jan. 6. (Eastman appears never to have been paid.)

A lawyer for Eastman did not respond to a request for comment.

Disclosure of the email comes at a time when the Justice Department is intensifying its criminal investigation of the effort to overturn the 2020 election. Patrick Philbin, who was a deputy White House counsel under Trump, has received a grand jury subpoena in the case, a person familiar with the situation said.

Philbin is the latest high-ranking former White House official known to be called to testify before the grand jury. Others include his former boss, Pat Cipollone, who as White House counsel argued, along with other White House lawyers, against some of the more extreme steps proposed by Trump and his advisers as they sought to hold onto power.

Earlier subpoenas to a number of people had sought information about outside lawyers, including Eastman and Giuliani, who were advising Trump and promoting his efforts to overturn the results.

In June, federal agents armed with a search warrant seized Eastman’s phone, stopping him as he was leaving a restaurant in New Mexico.

In testimony to the House committee investigating the Jan. 6 attack on the Capitol, another White House lawyer, Eric Herschmann, said that Jan. 7, 2021, Eastman brought up with him the idea of pursuing litigation in Georgia. Herschmann said he responded that Eastman was out of his mind, adding that he told Eastman: “I only want to hear two words coming out of your mouth from now on: orderly transition.”

Herschmann, by his account, went on to tell Eastman that he should get a great criminal defense lawyer because he was going to need one.

The newly disclosed email shows that Eastman did not let up even after Biden had been sworn in. It was sent after the Trump campaign had raised tens of millions of dollars from solicitations to Trump’s supporters suggesting the money would be used to fight voting fraud, even as the claims made by Trump and his allies were rejected by the courts and broadly debunked even by Trump’s own Justice Department.

In proposing to use the Georgia runoff elections as a route to finding fraud in the general election held months earlier, Eastman was implicitly conceding that other, more direct accusations of fraud had failed to find any traction.

The email suggests that Eastman saw the courts in Georgia as an investigative tool, using the discovery process, for continuing to try to bolster claims that had already been dismissed.

“We need to figure out how to keep up the fight,” Eastman wrote. “I’m inclined to pursue an election challenge to the Georgia runoff election, using what we already have learned (huge statistical anomalies, violations of Georgia law, etc.) as the basis. Under Georgia law, a challenge can be brought by any qualified voter, even if the candidates themselves are not interested.”

In the email, Eastman argued that if the group of lawyers and Trump advisers involved in the effort could find fraud in the Jan. 5 runoff elections in Georgia — which were won by Raphael Warnock and Jon Ossoff, both Democrats — they could vindicate themselves for the claims they made about the November election.

Toward the end of the email, Eastman implied that the Trump campaign could fund the ongoing efforts. He named a team of lawyers he would recommend, but he said two of them needed their outstanding Trump campaign bills paid before they would consider taking on the work.

Eastman was not alone in seeking payment from the campaign’s swelled coffers for efforts to keep Trump in office. An associate of Giuliani sent an email to the campaign shortly after Election Day in 2020 seeking $20,000 a day in compensation for Giuliani. At the time, Giuliani was urging Trump to keep fighting the results of the election and jumped at the chance to lead the legal efforts doing just that.

But Trump told his advisers at the time that Giuliani would only get “paid on the come,” a reference to a bet in the casino game craps that is essentially payment on a successful roll of the dice, according to two people with knowledge of the discussions.

Eastman told some of Trump’s aides that he was working for free, according to one of the people with knowledge of the discussions. At the same time, he had developed a private arrangement with another lawyer working on Trump’s efforts, Bruce Marks, to be compensated through Marks, although it does not appear he received money that way.

By the time Biden became president, Eastman tried to be paid directly, the Jan. 20 email shows, although two people with knowledge of the campaign’s finances said he never was. In addition to seeking to be paid for his time working with the White House in January, he sought to bill the Trump campaign $125,000 for his work on a lawsuit filed by the Texas attorney general seeking to have the election results in a number of battleground states invalidated. The suit was quickly thrown out by the Supreme Court.

Since the Capitol riot, Eastman has gone from a little-known conservative law professor to the best-known legal architect and promoter of the plan to use purported slates of electors backing Trump in an attempt to block or delay Congress’ certification of Biden’s victory on Jan. 6.

His actions have been a focus of the Justice Department inquiry and the House committee investigating the Jan. 6 attack and what led to it. Eastman repeatedly invoked his Fifth Amendment right against self-incrimination when questioned by the committee.

During in-person meetings at the White House in the days before Jan. 6, Eastman tried to persuade Pence and his top lawyer, Greg Jacob, to go along with the plan to overturn the election.

At the first meeting, on Jan. 4, Trump and Eastman brought Pence and two of his top aides, Jacob and Marc Short, to the Oval Office. That meeting was followed by another, on Jan. 5, during which Eastman sought again to persuade Jacob to go along with the scheme.

After Jacob refused, Trump publicly pressured Pence in front of a raucous crowd of his supporters at the Ellipse on Jan. 6. Later that day, when a pro-Trump mob was attacking the Capitol, Jacob emailed Eastman blaming him for the violence.

In March, a federal judge ruled in a civil case that Eastman and Trump had most likely committed felonies as they pushed to overturn the election, including obstructing the work of Congress and conspiring to defraud the United States.

The actions taken by Trump and Eastman, the judge found, amounted to “a coup in search of a legal theory.” 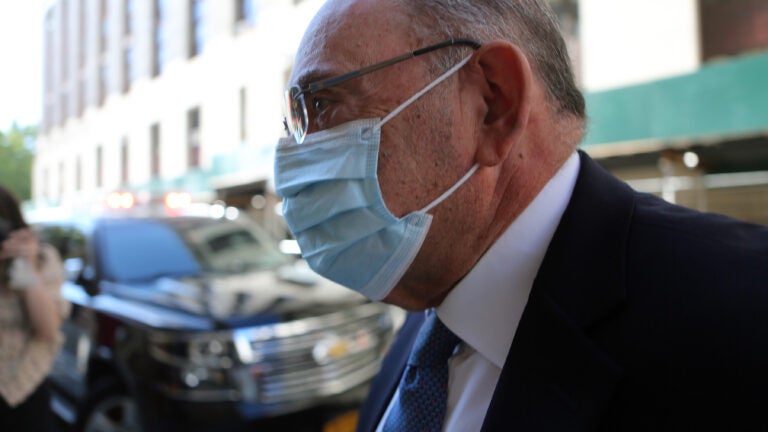