A debate between Tanisha Sullivan and William Galvin, candidates in the Democratic primary for secretary of state, became heated Monday as they used their answers to most questions to dig into each other.

Sullivan, president of the NAACP Boston is challenging the longtime incumbent Galvin, who’s held the position since 1995. They participated in the debate hosted by Tiziana Dearing on WBUR’s “Radio Boston” as part of a partnership with WCVB and The Boston Globe that mainly focused on voting rights-related questions. Sullivan initially raised the importance of voting rights in response to a question from Dearing about the lens through which she would approach the job.

She advocated for the secretary of state’s office to be “more active in increasing voter participation,” which became a common theme of the debate.

The conversation got more heated when Sullivan brought up what she sees as Galvin’s shortcomings.

“Civil rights organizations sue Bill Galvin because of his failure to actively implement the National Voter Registration Act,” Sullivan said. “This required a federal court to get involved. We’re not talking about a champion of voting rights, we’re talking about someone who is incredibly reactive to the detriment of the advancement of voting rights.”

“I proposed the law, I pushed the law,” Galvin said. “The NAACP had absolutely nothing to do with it.”

Dearing probed why voters should stick with Galvin as the status quo or turn to Sullivan for something new.

Galvin turned back to civil rights, calling his record on the issue “pristine,” while Sullivan again dug into Galvin’s leadership.

“The status quo is not only not working, it is failing us,” Sullivan said.

Galvin then again turned back to what he considered to be “misstatements” by Sullivan about his work in the position for the last 27 years he’s held it.

“I am not ignorant, and I am not misinformed. I am highly credentialed, I am highly experienced,” said Sullivan in response. “I am more qualified and credentialed today than the day you walked into that office.”

In discussing whether ballots should still be collected on paper and how to increase security of that system, Galvin said he thinks it should remain a paper-based system. Sullivan used that to assert that Galvin is not a proactive secretary of state, saying, “the idea that we are OK and there’s nothing more we can do is a problem.” Referring to people who want to “attack democracy,” she said we need a secretary of state that understands that we have to work to stay ahead of those who would challenge democracy through elections.

One point Sullivan and Galvin agreed on was the importance of preventing disinformation and ensuring integrity in the administration of elections, especially as the 2024 presidential election approaches, which former President Donald Trump may run in.

They also touched on housing, the census, and redistricting, before ending with closing statements.

“Our democracy has evolved over the last 27 years, and I’m running for this office because this is quite frankly a different moment for Massachusetts — voting rights, transparency, reproductive freedom — these are the fights of our times, and Bill Galvin has spent 27 years fighting against them,” Sullivan said.

She positioned herself as a partner with the voting rights and civil rights communities and a secretary of state who will be able to deliver on election day voter registration.

He referenced the financial arena as another area he’s led the field in, as well as protecting “the rights of our vulnerable citizens.”

Election day for the Democratic primary for secretary of state is Tuesday, Sept. 6. 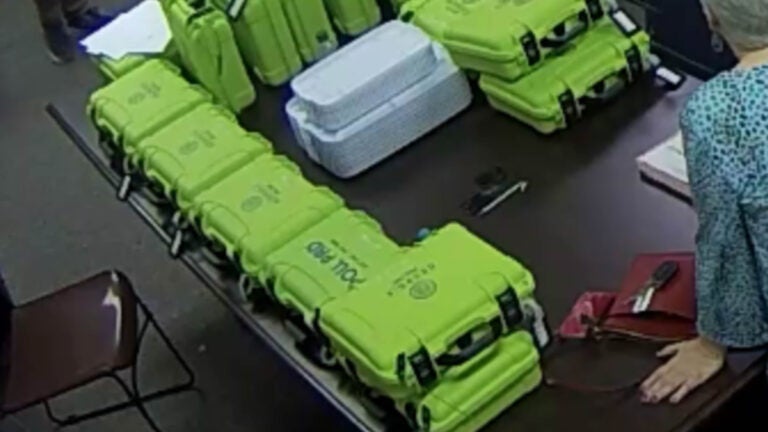