Fallout from the alleged sexual assault controversy surrounding Boston City Councilor Ricardo Arroyo bled into a tense and rowdy City Council meeting on Wednesday, where passions flared for and against the embattled councilor, but that ultimately ended with two rivaling subpoenas for public records withdrawn.

City Council President Ed Flynn repeatedly fought for control of the meeting from both councilors and spectators alike, calling recess after recess to re-center conversation and handle hecklers in the crowd.

After members of the public were barred from the chamber pews for consistent outbursts, a scuffle broke out in the hallway of City Hall and a protest with cries of “Disbar Arroyo” broke out in council offices.

A Boston police spokesman told Boston.com Wednesday afternoon one person was arrested at City Hall, but no further information was immediately available.

Inside, simmering tensions among councilors reached a climax as councilors of color raised concerns over what impact Flynn’s decision to temporarily strip Arroyo, a Latino councilor, of committee chairmanship positions will have on diversity in the ongoing redistricting process.

That process was led by a body that Arroyo had chaired, but will now be helmed by Councilor Liz Breadon, who is white.

As tensions crescendoed, Councilor Kendra Lara, who is Black, said she receives death threats in her email inbox every day, with messages calling her things such as a “(racial slur) wh*re.”

She placed blame squarely on the sister of white Councilor Erin Murphy as the alleged perpetrator of an attack campaign.

Lara said she brought the matter to Flynn, but that, despite Flynn’s request, Murphy refused to speak to her sister about it.

“I have to show up to events in my district with security,” Lara said.

The packed chamber, stocked with reporters and television cameras, came amid the council’s first full-body meeting since a Boston Globe report last week found Arroyo, also a candidate for Suffolk County district attorney, was twice investigated for possible sexual assaults as a teenager in 2005 and 2007, though he was never charged with a crime.

Arroyo, 34, has repeatedly denied any wrongdoing and says he never had knowledge of any investigation involving him. A police report obtained by the Globe, however, contradicts that claim: Investigators said they met with Arroyo, his attorney, and his mother in relation to the 2005 case.

Arroyo did not speak on the allegations during the council meetings.

The wave of take-backs came on the heels of another Globe report published Tuesday evening in which the woman involved in the alleged 2005 incident broke her silence and stood by the allegations she made nearly two decades ago.

The woman in the case from 2007, via an attorney, recently said Arroyo “never assaulted” her. Her initial allegations involved her belief that Arroyo may have raped her at a party.

At the onset of Wednesday’s meeting, the agenda promised the filing of two measures — known as 17F orders: One from Councilor Frank Baker seeking records on the Arroyo probes, and another in retaliation from Lara, seeking records related to Baker’s 1993 conviction for drug possession with intent to distribute marijuana.

Baker, who has endorsed Interim District Attorney Kevin Hayden over Arroyo, told the council the allegations involving Arroyo are “very serious at the least” and should be investigated as a matter of preserving public trust.

He insisted that a 17F Order is “not meant to penalize or demean anyone.”

“I stand before you assured in my decision to place the survivors first, prioritize the integrity of this body, and, quite honestly, follow my moral compass,” Baker said. “No matter the outcome, my conscious is good with this decision.”

At times shouting over interruptions, Baker also fired back at Lara’s order as “an effort to deflect and divert attention from the sexual assault allegations.”

He said he has always been transparent about his criminal record and the changes he has made in his life since his arrest.

Yet, Baker withdrew his order “as a result of a brave survivor coming forward” –an apparent reference to the Globe report published Tuesday.

Baker also made clear he is prepared to re-file the request if he decides to do so.

He ended his remarks saying, “If a predator continues to roam, the killing field only becomes larger.”

Speaking on behalf of her 17F Order, Lara, a steadfast Arroyo supporter, said she filed the request to demonstrate how councilors of different races are held to different standards and are disciplined differently by council leadership.

“What we know for sure is that none of our colleagues have broken any laws or any council rules during their tenure on the City Council,” Lara said.

Having illustrated that point, Lara said she would withdraw the measure.

Councilors of color have serious concerns over the council’s re-districting process — and the role of race on the council itself.

Flynn, on Wednesday, also stripped Arroyo of his chairmanship positions for at least 60 days.

Arroyo was the sitting chair of the powerful Committee on Government Operations and of the council’s re-districting committee. He was also the vice chairman of the entire council.

In Arroyo’s absence, Breadon will serve at the helm of the re-districting committee. Councilor Brian Worrell, who is Black, will serve as vice chairman, filings show. Arroyo is still listed as a committee member, however.

Late in Wednesday’s meeting, Breadon filed an order for the council to adopt principles to guide the re-districting process under a tight timeline. She underscored the importance of transparently completing the process, citing a history of lawsuits and concerns over racial imbalances in past re-districting.

No maps have been publicly disclosed so far, even though past processes have included “dozens of community meetings” over a year’s-plus timeline, she said

Arroyo’s allies on the council argued Flynn’s re-assignment decision will impact the council’s redistricting process, especially as maps are due by the beginning of November, or about 60 days away.

Councilor Tania Fernandes Anderson, who is Black, said it is clear that the city at large believes the council itself is already racially divided.

She has heard concerns from residents in her district — which includes Roxbury, Dorchester, Fenway, and part of the South End — that white councilors, through booting Arroyo from the committee, have now found a way to control the re-districting process for their benefit at the ballot box, she said.

“The fear is that people are afraid that their district will change and diversify like Councilor Baker’s district — that people will run for office and that person will be a person of color,” she said. “And so everyone is now super afraid.”

She noted that “all the white councilors here stick together.”

“We’re going back and forth about allegations, but here people are not innocent until proven guilty — people are guilty first; people are crucified; people are lynched. Same old trick. Same masters though,” Ferrnandes said, during impassioned remarks. “Now everything’s changed and everybody’s upset. Everybody is boiling up. People are calling me and telling me, ‘Don’t say anything. Stay in your lane. Be quiet. Sit down, you will lose your seat. They won’t vote for you. Fight. Don’t fight.’

She then played aloud a racist voicemail she received — one of the many she receives regularly, she said.

“I am sick and tired of this body just stupidly, racially divided — so afraid, so depraved,” Fernandes Andersen said. “People with no faith because they are afraid they’re losing their investment. They’re afraid of bargaining. They’re afraid of leveraging.”

Turning to Arroyo’s controversy, she said, “Let the courts decide.”

“People talk about this racial equity thing,” she said. “It’s all fake.”

Murphy, speaking after Fernandes Andersen, said she is an at-large councilor and therefore, “re-districting means nothing to me.”

“I represent all 700,000 residents in the city of Boston,” said Murphy, who serves on the re-districting committee. “Never in my life have I made a decision out of fear. We have spoken together about that.”

Murphy, who has endorsed Hayden in the district attorney race, then criticized Arroyo’s leadership, claiming as chair of the committee he held one, 20-minute meeting that started an hour late — a statement Lara said was false.

“This is again highlighting the disparate level of expectation for white leadership and leadership of color here on the council,” Lara said.

Councilor Julia Mejia, who is Afro-Latina, spoke last on the matter before Flynn declared a long recess to quell the crowd gathered in the chamber.

“I walked into this council meeting today knowing that all of our laundry was going to be put out to dry because there’s so much drama that happens behind the scenes here,” Mejia said. 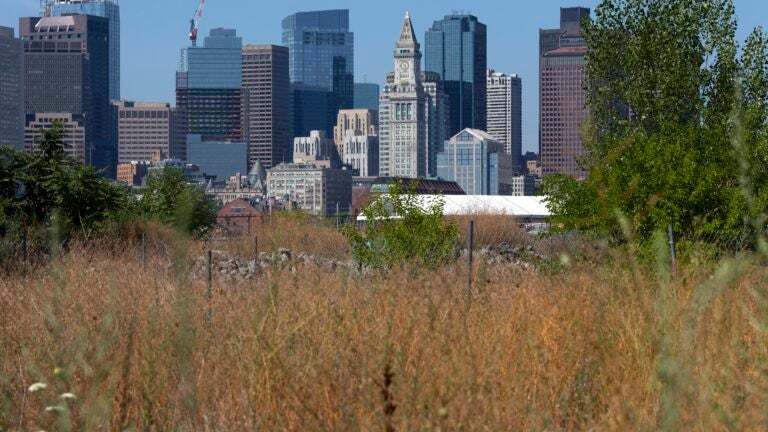