On Wednesday night, Attorney General Maura Healey and former State Rep. Geoff Diehl squared off in the highest-profile event yet in the race to become Massachusetts’ next governor. During their debate, moderated by NBC10 Boston Anchor Latoyia Edwards, both candidates touched on a wide range of issues, from affordable housing to abortion, transportation, and more.

While election day is still weeks away, the event gave Diehl and Healey an opportunity to make their pitches directly to voters and succinctly lay out their beliefs on a number of topics. Below are five initial takeaways.

The topic of affordability, especially the affordability of housing and energy, was a major factor in the debate. In his first remarks, Diehl said that Healey’s push for renewable energy solutions would cost residents dearly. A plan to eliminate fossil fuel reliance by 2030 is not feasible, Diehl said, and it is important to transition to renewable energy in a more responsible, measured manner.

“We need to get from A to B responsibly, I’m for renewable energies, but we can’t do it irresponsibly. She’s going to bankrupt our state, bankrupt our households if we trust her energy policy,” Diehl said.

Healey said her focus is on keeping Massachusetts competitive so that residents are not forced to move away and so that companies are attracted to the state. She advocated for more housing for people at various income levels and for affordable, efficient public transportation. Healey said that, as Attorney General, her office saved $7 billion for residents.

Diehl said that Question 1, also known as the Fair Share Amendment or the Millionaires’ Tax, would drive out people and businesses from the state, hurting Massachusetts’ overall economy. The proposed amendment would, if passed, establish an extra 4% state income tax on that portion of annual taxable income in excess of $1 million.

National politics, specifically those of President Biden and Former President Trump unsurprisingly infiltrated Wednesday’s debate. Healey wasted no time bringing up Trump, saying in her answer to the first question that Diehl is Trump’s candidate. Diehl is endorsed by Trump, who participated in a tele-rally in support of Diehl. Healey added that she would reject “Trumpism” and its influence in Massachusetts.

Diehl characterized Trump as Healey’s “boogeyman.” He said that attention paid to the former president by Healey and the media is a distraction from the important issues of the race, like affordability, and that the debate would focus on Massachusetts instead of national politics. He went on to link Healey to Biden, saying that the President has led the country into an “economic disaster.”

Diehl offered another answer when asked about the topic Wednesday.

“Obviously Joe Biden won the election, look at how bad the economy is right now,” he said.

Healey said that Diehl “continues to play from the Trump playbook,” and defended the actions her office took in suing the Trump administration almost 100 times. She said that those suits did not cost taxpayers any money, and were important measures to take in regards to protecting residents.

A topic inextricably tied to national politics but with serious local ramifications, abortion rights and the Supreme Court’s decision to overturn Roe v. Wade came up many times on Wednesday.

Diehl said he supported the Supreme Court’s decision, and that he always felt that abortion should be a states’ issue. However, Diehl said that he is dedicated to protecting women’s reproductive health. When he was born, Diehl said his parents were not married and decided to have him anyway.

“That shapes my view on abortion, of course,” he said. “My personal view on abortion is not what I do as governor. My job is to work within the boundaries of the legislature and the laws that they’ve set.”

Healey said that Diehl “celebrated” the decision to overturn Roe v. Wade, and that he wants to defund Planned Parenthood. Healey said that she would work with public health officials to provide care to people coming to Massachusetts with the goal of getting an abortion.

“Given the national context, Massachusetts needs a governor who will protect a woman’s freedom to make decisions for herself. It’s as simple as that. I will, he won’t,” Healey said.

The myriad safety and staffing issues facing the MBTA and wider transportation issues across the state also played a key role in the debate. Both Diehl and Healey said that major changes were needed.

Healey said that fixing transportation issues was necessary to fixing the economy and addressing the affordability issues many residents have. Healey said she would appoint a safety chief to oversee the inspection of trains and buses across the state. Second, Healey said she would “change the way everything is governed,” to make sure transportation officials are directly responsible for capital planning and operations.

Finally, Healey said that it is of paramount importance to bolster the transportation system’s workforce.

“Right now, we don’t have enough people who are trained. We need to recruit more people into this workforce, it’s a real workforce issue when it comes to transportation,” she said.

Diehl said that he is against bringing in outside consultants to dictate how the MBTA and other transportation systems operate. He advocated for listening to the workers about the best ways to solve these problems. Diehl agreed with Healey that staffing shortages were a major concern. But he linked that to COVID-19 vaccine mandates, saying that those caused many employees to either retire early or lose their jobs.

The candidates were asked another set of questions regarding a healthcare topic: the opioid epidemic and addiction issues at large.

Diehl said he wants to tackle the opioid crisis immediately, specifically by expanding addiction treatment facilities from large cities into the suburbs.

“We need to expand those mental health services into the suburbs,” he said. The state should “not just centralize it in areas like Worcester. That’s really where you see the homeless on the streets of big cities like at Mass and Cass… I want to make sure that those people get the help they need closer to their families, closer to their work as well.”

Healey said that the state needed to continue investing in resources aimed at addressing the overlap between substance use disorder and mental health. She added that Massachusetts needs to invest more in short-term detox housing as well as long-term housing. Healey would support law enforcement’s efforts to crack down on the drug trade, specifically the movement of fentanyl and other synthetic substances.

Healey touted her actions as Attorney General, going after Purdue Pharma for its role in the opioid epidemic.

“I’m proud that I was the Attorney General who sued Purdue, who sued the Sacklers. My office recovered over half a billion dollars by going after opioid manufacturers, all of which is being put towards prevention, recovery, education, and harm reduction.” 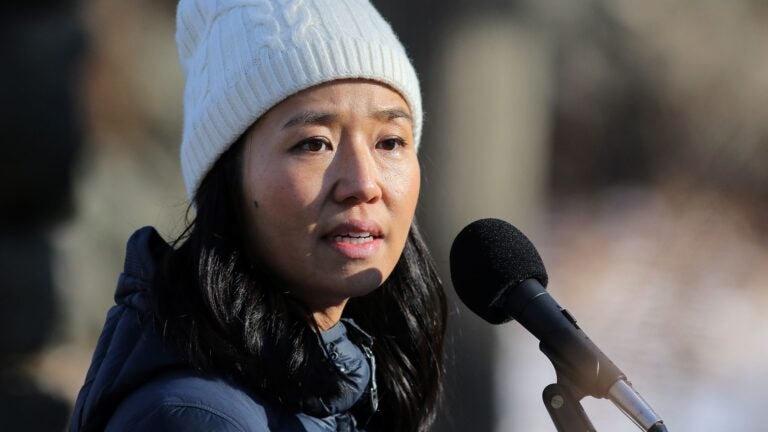