In the two days after President Joe Biden officially launched the application process for his student debt cancellation program, more than 12 million Americans rushed to sign up.

That quick uptake is “really a testament to the need, how meaningful this relief is, how desperately people needed it,” Rep. Ayanna Pressley said Wednesday in an appearance on WBUR’s “Radio Boston.” “Student debt cancellation is going to change lives; it’s going to save lives.”

Next week, Pressley and Sen. Elizabeth Warren will hit the road to raise awareness for the program in Massachusetts. The lawmakers’ “Student Debt Cancellation Tour” includes stops in Boston, Brockton, Worcester, and Springfield.

More than 800,000 borrowers in Massachusetts will be eligible for some kind of student loan debt relief, with 300,000 to 400,000 potentially eligible to have all their debt canceled, “Radio Boston” host Tiziana Dearing pointed out.

“Are you satisfied with those numbers?” she asked.

Pressley commended the Biden administration for its responsiveness, emphasizing the stories behind those figures.

“We’re talking about grandmothers still paying off student loans while on Social Security and a fixed income,” she said. “New parents struggling to manage the cost of child care, rent, and student loan payments.”

Debt forgiveness is more than an economic justice issue; it’s also a gender justice issue and a racial justice issue, Pressley argued. She said the debt burden falls disproportionately on women, and that people of color have been locked out of previous federal opportunities to build generational wealth.

“It’s taken a psychological toll,” Pressley said of student debt. “There’s shame people have carried, and that’s why I don’t call it ‘forgiveness.’ There’s no shame; borrowers are doing what we told them to do.”

Borrowers with federal student loans who made less than $125,000 as an individual or $250,000 as a household are generally eligible for relief and can apply at studentaid.gov.

“Now that President Biden has canceled student debt, now we want to be just as exhaustive in using every tool available … to make sure that everyone who’s eligible is benefitting from this meaningful relief,” Pressley said of next week’s tour.

She added: “It’s not true [that] ‘if you build it, they will come’ if folks don’t know about it.” 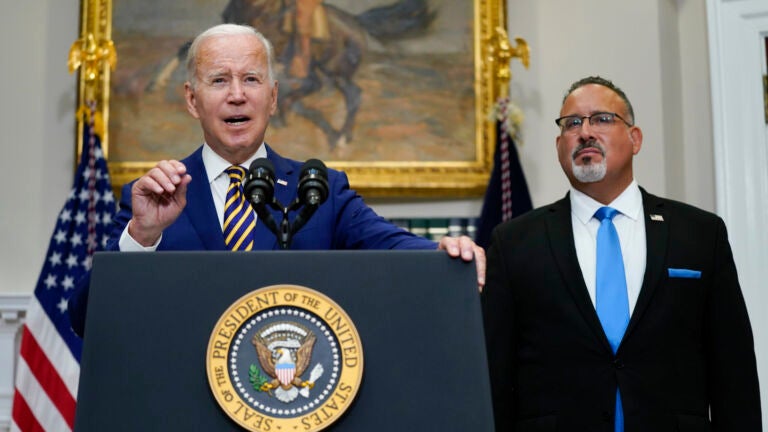