But now voters will get the final say.

Whether or not the state should follow through the controversial law will go before the people as Question 4 on this November’s ballot, following a successful GOP-backed initiative to bring the matter to voters.

Supporters of the “Work and Family Mobility Act” have said allowing undocumented residents to obtain licenses is a common sense public safety measure to make sure more drivers are properly trained on the rules of the road.

But opponents have argued granting immigrants without legal status state-recognized identification would open the door for voter fraud in elections and would place too high a burden on the Registry of Motor Vehicles to verify foreign documents.

Here’s everything to know about the debate around Question 4:

History of the law and how the law will work

After years of lobbying, advocacy and tweaks, proponents of the law scored a victory earlier this year when the state House of Representatives voted to pass the bill in February.

House lawmakers passed the measure on a 120-36 vote. The state Senate picked up the bill, too, before Baker vetoed it in May. State lawmakers then overrode Baker’s veto in June.

Under the law, a person can obtain a driver’s license or learner’s permit in Massachusetts so long as they pass a road test, meet all other qualifications, and provide proof of their identity, date of birth, and residency.

The registrar of motor vehicles cannot ask or create a record of the citizenship or immigration status of the applicant, and applications cannot be used to obtain the federally-recognized Real ID.

To prove identity and date of birth, applicants need to provide the RMV with at least two documents from both of these categories:

At least one of the documents must include a photograph and at least one must state a date of birth. Documents not written in English must be submitted with a certified translation.

“The registrar may review any documents issued by another country to determine whether they may be used as proof of identity or date of birth,” according to a summary of the law from the Secretary of State’s office.

Applicants must also attest, under threat of perjury, their license has not been suspended or revoked in any other state, country, or jurisdiction.

“The law also requires the registrar and the Secretary of the Commonwealth to establish procedures and regulations to ensure that an applicant for a standard driver’s license or learner’s permit who does not provide proof of lawful presence will not be automatically registered to vote,” the Secretary of State’s office says.

The law, as currently written, takes hold on July 1.

The effort ultimately received more than enough support to make the ballot. Last month, the state’s Elections Division certified 71,883 signatures collected to get the question on the ballot — well above the 40,120 signatures required.

As the state Senate considered the bill this past spring, a Suffolk University/Boston Globe poll found 47 percent of residents surveyed were opposed to the legislation and nearly as many — or 46 percent — were in favor of it. Only about 7 percent of those polled were unsure of how they felt about the law.

But more recent polling shows most voters have been swayed to support the law.

‘Just common sense’: What supporters of the law say

Defenders of the law have coalesced into the “Yes on 4 For Safer Roads” campaign in the build-up to the Nov. 8 election.

The group contends the law helps protect public safety through ensuring all drivers learn and are properly vetted for safe driving practices.

For that reason, some law enforcement leaders have backed the measure, including the Massachusetts Major Cities Chiefs of Police Association.

“Voting Yes on 4 is just common sense: all of us will be safer if all drivers on the road pass a driving test, have insurance and have a license,” association president and Lawrence Police Chief Roy Vasque said in a statement shared by the “Yes” campaign. “Everyone needs to get to work and get to school, so let’s do everything we can to get people where they’re going safely.”

According to Yes on 4, 17 other states have enacted similar laws.

Democratic state Sen. Brendan Crighton, of Lynn, in a debate on the ballot question on GBH’s “Greater Boston” earlier this month, said hit-and-run incidents have decreased in those states after the laws were put in place.

A report from the Massachusetts Budget and Policy Center, a think tank, states Connecticut saw a 9 percent decrease in hit-and-run crashes in the years after lawmakers there passed the law. California saw a similar drop of up to 10 percent per year.

Research also showed Utah and New Mexico saw decreases in their rates of uninsured drivers by as much as 80 percent and 60 percent, respectively, following passage of their laws, according to the report.

In April, several mayors testified on Beacon Hill in support of the law, including Boston Mayor Michelle Wu and Salem Mayor Kim Driscoll, who is now the Democratic nominee for lieutenant governor.

Having access to a driver’s license allows people to better access work and school. Economically speaking, access to a vehicle also opens doors for new jobs and even gives some folks the tools to start a business, Driscoll said at the time.

“It doesn’t make any sense to have drivers not having access to a driver’s license,” she said. “Do we want to support individuals who are new to our community and their ability to grow and prosper the way any of us who were born here have that opportunity? I think the answer to that is yes.”

‘We cannot reward people who broke our laws’: What opponents of the law say

The MassGOP-led push to repeal the law through the ballot question began in June, with a kick-off from Diehl and his running mate, now Republican nominee for lieutenant governor Leah Allen.

“This bill is a bad bill,” Diehl said in June. “Leah and I will not sit by idly and watch the consequences of this bill take away the safety and democratic rights of Massachusetts residents.”

Diehl also partnered with Maureen Maloney, who chairs a committee formed earlier this year called, “Fair And Secure Massachusetts.” The group is now urging voters to vote “No” on Question 4 this November.

“We are a country of rules and laws,” the committee’s website states. “Laws we must follow to ensure a fair, safe, and functional society. We cannot reward people who broke our laws to be here.”

The committee argues the law would attract more immigrants without legal status to the Bay State and would also place election integrity at risk “by opening a backdoor for undocumented immigrants to use a driver’s license to vote.”

John Milligan, of Fair and Secure Massachusetts, expands on this in his argument explaining the “No” vote published by the Secretary of State’s office:

In his veto message of this bill, Governor Charlie Baker made it known that the Registry of Motor Vehicles does not have the capability or expertise necessary to verify documents from other countries and notes that, if this bill becomes law, Massachusetts drivers’ licenses will no longer confirm that a person is who they say they are.

Additionally, Governor Baker states the bill specifically restricts the Registry’s ability to share citizenship information with entities responsible for ensuring only citizens register to vote and vote in our elections, significantly increasing the likelihood that noncitizens will register to vote.

This bill is patently unfair to those who have taken the time to immigrate to our great country via legal means and significantly diminishes the public safety of all residents of the Commonwealth.

In the GBH debate, the Republican nominee for attorney general, Jay McMahon, who is also a Fair and Secure Massachusetts committee member, said license applicants in Massachusetts are automatically registered to vote when their applications are processed, unless they check a box to opt out of becoming an enrolled voter.

McMahon cast doubt on the RMV’s ability to handle differentiating between citizens and non-citizens.

“They can’t even suspend licenses from people when they’re supposed to,” he said.

Earlier this year, Secretary of State William Galvin, the state’s top election official, rebuked Baker’s argument though, telling MassLive what “the governor is saying makes absolutely no sense at all.”

“We’ve definitely spoken with the Registry of Motor Vehicles, and we can solve any concern there is about this,” Galvin said of the automatic voter registration law. “But this bill should be signed … His (Baker’s) concerns are baseless. We have some proposals that would address them, even as baseless as they are.”

In the debate, Crighton refuted McMahon by pointing to the fact that to register to vote, applicants must also prove their citizenship and that the RMV has already granted licenses to green card holders, foreign visa holders, and DACA recipients, among others, without enrolling them as voters.

“If we already have a system in place that works, how would this be any different?” Crighton asked.

“It’s a dangerous law … It’s a law that circumvents the federal authorities who have the primary jurisdiction in vetting these people (from other countries),” McMahon said.

Crighton said, however, the statistic is part of a national trend, citing the rising number of deadly crashes over the course of the COVID-19 pandemic.

What your vote means

On your ballot, a:

The early voting period for Massachusetts begins on Saturday. 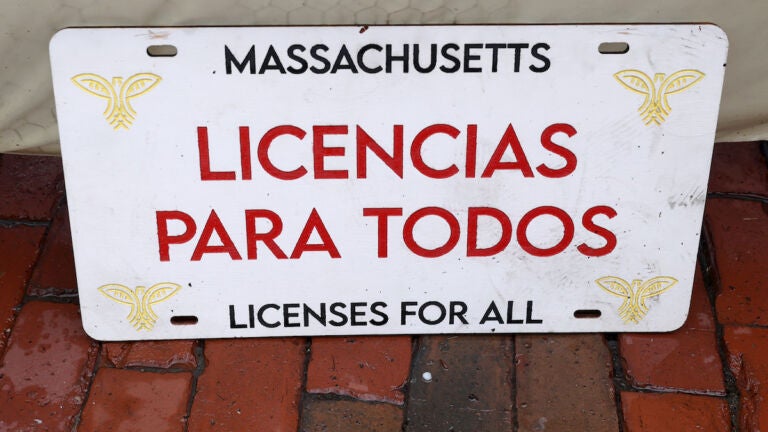