WASHINGTON (AP) — The man accused of attacking House Speaker Nancy Pelosi’s husband carried zip ties with him when he broke into the couple’s San Francisco home, according to a person briefed on the investigation, in what is the latest parallel to the Capitol riot of Jan. 6, 2021.

The person was not authorized to publicly discuss the Pelosi case and spoke to The Associated Press on condition of anonymity Sunday.

The attack on Democratic leader’s 82-year-old husband, Paul Pelosi, less than two weeks before before the Nov. 8 election that will determine control of Congress as well as key statewide and local offices, was an unsettling reminder of the nation’s toxic political climate. With threats to public officials at an all-time high, members of Congress were being urged to reach out for additional security resources, including increased police patrols of their neighborhoods.

U.S. Capitol Police Chief J. Thomas Manger said in a weekend memo to lawmakers that the attack “is a somber reminder of the threats elected officials and families face in 2022.”

Police in San Francisco said the assault of Paul Pelosi was intentional. Authorities said the suspect, identified as David DePape, 42, confronted Paul Pelosi in the family’s Pacific Heights home early Friday and, the AP has reported, demanded to know, “Where is Nancy?”

The two men struggled over a hammer before officers responding to a 911 call to the home saw DePape strike Paul Pelosi at least once, police said. DePape was arrested on suspicion of attempted murder, elder abuse and burglary. Prosecutors plan to file charges on Monday and expect his arraignment on Tuesday.

Eerie echoes of the Jan. 6 riot were apparent in the incident at the Pelosi home.

Rioters who swarmed the Capitol trying to overturn Joe Biden’s election victory over Donald Trump roamed the halls and shouted menacingly, demanding “Where’s Nancy?” Some in the siege were seen inside the Capitol carrying zip ties. The presence of the zip ties on the suspect in Paul Pelosi’s assault was first reported by CNN.

Nancy Pelosi was in Washington when her husband was attacked at home. She soon returned to San Francisco, where her husband was hospitalized. He had surgery for a skull fracture, and suffered other injuries to his arms and hands, her office said.

“Our children, our grandchildren and I are heartbroken and traumatized by the life-threatening attack on our Pop,” she said in a letter late Saturday to colleagues. “We are grateful for the quick response of law enforcement and emergency services, and for the life-saving medical care he is receiving.”

With Election Day nearing and Trump relentlessly promoting claims he did not lose to Biden in 2020, federal agencies warned on Friday that domestic extremists fueled by election falsehoods “pose a heightened threat” to the midterms. The Department of Homeland Security and other federal agencies said the greatest danger was “posed by lone offenders who leverage election-related issues to justify violence.”

Biden and other officials, Democrats and Republicans, condemned the attack on Paul Pelosi and said violence has no home in American politics.

Trump, in an interview taped Friday with Americano Media, a conservative Spanish-language network, called the attack on Paul Pelosi a “terrible thing,” but the former president also tried to link it to crime in U.S. cities.

For years, Republicans have tried to make Pelosi a campaign boogeyman, using the 82-year-old’s image as a recurring caricature in countless ads against Democrats, including many now airing in races nationwide during a hostile election season.

The head of the Republican National Committee, Ronna McDaniel, said Sunday it was “unfair” to blame the GOP for creating a political climate that could have laid the ground for such an attack.

The House GOP’s campaign chief, Minnesota Rep. Tom Emmer, was asked during a Sunday interview about a tweet promoting his own video, which shows him shooting a gun at an indoor target.

“Enjoyed exercising my Second Amendment rights,” Emmer tweeted, mentioning he was with two House GOP candidates. The video includes the imagery and sounds of the rifle being fired. The tweet was posted Wednesday, before Paul Pelosi was assaulted, and said: “13 days to make history. Let’s #FirePelosi.”

Emmer said on CBS’ “Face the Nation” that he was just “exercising our Second Amendment rights, having fun.”

McCarthy said on Fox News Channel’s “Sunday Morning Futures” that violence or the threat of violence “has no place in our society.”

Five years ago, a left-wing activist opened fire on Republicans as they practiced for an annual charity baseball game. Rep. Steve Scalise of Louisiana was critically wounded. In 2011, then-Rep. Gabrielle Giffords, D-Ariz., was shot in the head at an event outside a Tucson grocery store.

Elon Musk jumped into the debate Sunday tweeting, then deleting, a link to a fringe website with an unfounded rumor about the attack on Speaker Pelosi’s husband. Sent to his millions of followers, Musk’s tweet came just days after his purchase of Twitter fueled concerns that the social media platform would no longer seek to limit misinformation and hate speech.

Sen. Amy Klobuchar, who leads the Senate committee overseeing security at the Capitol, said lawmakers are considering new measures, including taking their private information off the internet.

Klobuchar, D-Minn., noted, however that Nancy Pelosi “has been villainized for years and, big surprise, it’s gone viral, and it went violent.”

“I think it is really important that people realize that it is not just this moment of this horrific attack, but that we have seen violence perpetrated throughout our political system,” Klobuchar told NBC’s “Meet the Press.” 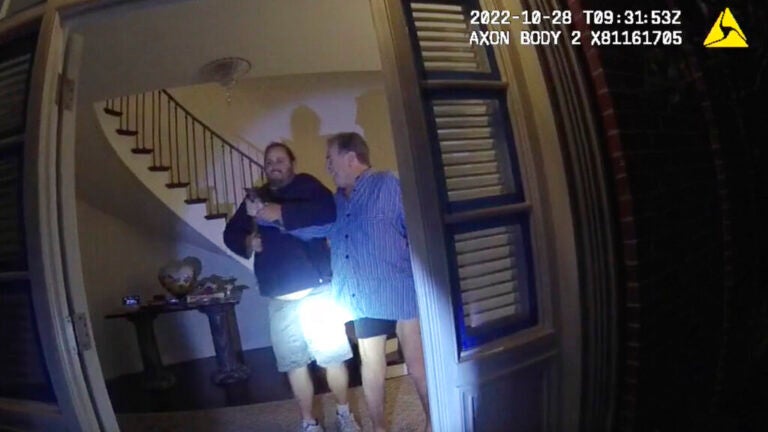