Vice President Kamala Harris spoke in Boston on Wednesday, touting the Biden Administration’s plan to help lower energy costs ahead of the winter.

Speaking at the Sheet Metal Workers Union Local 17 in Dorchester, Harris announced that the White House was investing $13 billion nationwide and $300 million in Massachusetts to further these efforts. Harris said this money would help low and middle-income families cover energy costs and switch from traditional heating and cooling systems to cleaner, energy efficient equipment.

“One of the best ways a family can reduce the energy bill is to make their home more energy efficient. But here’s the challenge: For many homeowners, many folks who are here today, you know that energy efficiency upgrades are expensive. And even though we know it can save you thousands of dollars in the long run, the upfront cost is often too high for so many families to be able to afford,” Harris said.

The White House said Wednesday that $4.5 billion would be allocated for the Low-Income Home Energy Assistance Program (LIHEAP). Last year, the program helped more than 5.3 million households nationwide pay for heating, cooling, and weatherization services. LIHEAP funds can cover unpaid utility bills and cost-effective home energy repairs. Information about this program can be found at www.energyhelp.us.

“This support is particularly important during the winter and summer months, as millions of Americans deal with extreme weather and natural disasters,” the White House said in a statement.

Federal officials also announced new allocations from the Inflation Reduction Act that congress passed over the summer designed to make homes more energy efficient. Nearly $9 billion is going to states and tribes in the form of a rebate program that could support up to 1.6 million households nationwide. This could cover the costs of installing up to 500,000 heat pumps as well as insulation and electrical wiring.

Combined with an expanded Weatherization Assistance Program, this program makes strides towards meeting President Joe Biden’s goal of adding 12 million heat pumps by 2030. Wednesday’s announcement allows states to now access information about their allocated funding so that they can begin the process of distributing this money to residents.

Heat pumps could help save up to $500 in energy bills every year while supporting job growth and providing cleaner air to homes around the country, Harris said.

“Heat pumps are highly efficient technology that can heat and cool homes and buildings using just half or a third of the energy used by traditional heating systems,” the White House said in a statement.

The Vice President’s remarks come as Massachusetts residents and businesses are preparing for major spikes in their utility bills this winter. The Massachusetts Department of Public Utilities on Monday approved new gas and electric rates, WCVB reported. Gas bills are expected to rise between 11% and 27% depending on the company and location. Electric bills for National Grid customers will rise by 65% from last year.

Eversource Energy President and CEO Joseph R. Nolan, Jr. sent a letter to the White House last week urging Biden to use emergency powers to make sure New England residents don’t face blackouts and fuel shortages this winter. Despite many clean energy projects, New England remains dependent on natural gas. This supply could be in jeopardy if the region faces a prolonged period of extreme cold in the coming months.

“We are working, all of us together, at the intersection of so many important priorities,” Harris said. “By helping families pay the upfront cost for energy efficiency upgrades to their homes, we are also lowering energy bills, bringing down household costs, creating jobs, and fighting the climate crisis. It’s all connected.” 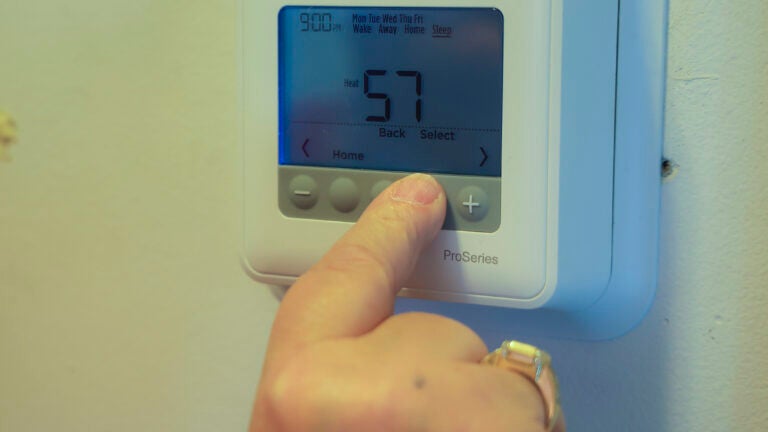 Mass. officials order decrease of home heating gas prices. Here’s by how much