Maura Healey will be the first woman elected governor of Massachusetts and one of the nation’s first openly lesbian politicians to ever serve as a state’s chief executive.

Addressing supporters during a victory party at the Fairmont Copley Plaza hotel in Boston, Healey vowed to be “a governor for everyone.”

“I’ll work with anyone who’s up for making a difference in this state,” she said. “I want you to know I understand what you feel. I understand where you are, and I’m going to do everything in my power to help you because we’re all in this together.”

The Associated Press called the race for Healey soon after polls closed at 8 p.m.

Diehl’s campaign, however, was initially hesitant to concede. Around 9 p.m., Campaign Manager Amanda Orlando told supporters in Boston that the AP’s projections were “irresponsible” and “extremely premature.”

Diehl ultimately conceded just before 11 p.m., telling supporters he was trailing Healey by a gap that was “impossible to close.”

Diehl said he called Healey to offer his congratulations.

“The people of the commonwealth have spoken,” Diehl said. “I respect their choice, and I ask everyone who supported me and Leah to give [Healey] the same opportunity for success that I would have asked if the shoe had been on the other foot.”

Both Healey and Diehl ran campaigns geared towards beating back the rising cost of living in the Bay State, from housing to everyday expenses.

But each saw notably different roads to get there.

Healey, promising an aggressive climate agenda, set forth plans to put the state on course for forgoing fossil fuels in the coming years. Diehl was a frequent critic of the proposal, quipping Healey would bankrupt the state in pursuing her vision.

Diehl, meanwhile, put emphasis on individual freedom. He called for rolling back the COVID-19-related mandates for state employees, and sought to give parents more say in their children’s classroom affairs, including through a proposal seeking to require informed consent for “controversial curriculum subjects.”

But Healey cautioned a Diehl win would open the door for “Trumpism” in Massachusetts, a political movement she says is idiosyncratic with local voter values.

On Tuesday night, Healey said making Massachusetts more affordable will be her job “from day one.”

“I’ll be a governor for every person struggling with higher costs,” she said. “We’ll make Massachusetts more competitive and affordable so that people will come here, stay here, and grow their businesses here. We’ll cut taxes, fix roads and bridges, invest in education and job training. And we’ll take on the climate crisis and create great clean energy jobs.”

“As long as I’m governor, women will always have the freedom to control their own bodies,” she said.

Healey’s win is hardly a surprise: Polls consistently showed Healey as the frontrunner since her entrance into the race early this year — a large lead she rode steadily to Election Day.

Still, Healey’s victory means Beacon Hill’s corner office will turn back over to Democrats — who hold significant majorities in both chambers of the state Legislature — once popular moderate Republican Gov. Charlie Baker finishes his second, four-year term in January. How exactly one-party leadership will be a change-up after years of balance between Baker’s office and the two chambers remains to be seen.

Healey, who has touted a close bipartisan working relationship with Baker, has often praised the now lame-duck governor and frequently cited his administration’s efforts on numerous issues as ones she would emulate or seek to continue.

When she takes office in January, Healey won’t be the first woman to serve as governor of the Bay State, though she is the first elected for the job.

Republican Jane Swift served as the state’s first woman governor between 2001 and 2003, after she ascended to the post when Gov. Paul Cellucci resigned to serve as the U.S. ambassador to Canada.

Healey will also make national history when she takes to the governor’s office.

Former Oregon House Speaker Tina Kotek, another Democrat and a lesbian, was also on the ballot for governor in her home state on Tuesday, though she faced a more challenging race than her Massachusetts counterpart.

In her remarks Tuesday night, Healey took time to address “every little girl and every young LGBTQ person out there.”

“I hope tonight shows you that you can be whatever, whoever you want to be,” she said to cheers from the crowd. “And..nothing and no one can ever get in your way except your own imagination — and that’s never going to happen.” 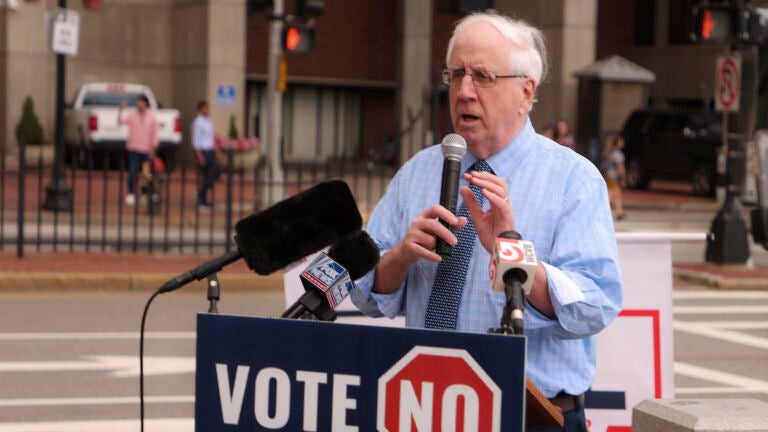 The latest on the squabbles inside the MassGOP