Warnock not only gave Democrats some breathing room in a closely divided Senate, but also provided grist for Republicans hoping to dethrone former President Donald Trump as the leader of their party. Even as the votes were still being tallied, Trump’s critics on the right were lashing him for saddling them with an untested and troubled candidate for a seat they believed was theirs to win.

Warnock’s victory also guaranteed — if there was any doubt — that Georgia will be hotly contested two years from now, when President Joe Biden or another Democrat tries to repeat his feat from 2020, when he flipped the state blue.

Here are five takeaways from the most expensive and bitterly fought Senate race of 2022:

The Warnock campaign wanted to make the race a contrast between a reverend and a running back, not a referendum on national Democrats or the Biden administration.

In Walker, the senator’s team had the perfect foil. Lurid allegations about his personal conduct drove national news: previously undisclosed children he had fathered, accusations of domestic violence, exaggerations about his business affairs, questions about his residency in Georgia.

Facing incessant doubts about his fitness for office, Walker tried self-abasement. “I’m not that smart,” he said at one point. It was a deft strategy for lowering expectations before his lone debate with Warnock. But in voicing the very concerns many Republicans held, he might have helped to crystallize them.

Walker’s problems were especially acute in metropolitan Atlanta, where voters tend to be wealthier and more educated. During the general election in Fulton County, for instance, he lagged the vote total of Gov. Brian Kemp, a fellow Republican, by a larger margin than his entire statewide gap with Warnock.

But Walker made little attempt to lure back those wayward Kemp voters, and kept serving up red meat instead. “I don’t even know what the heck is a pronoun,” he said at one rally. At another, he said that “Jesus may not recognize” transgender people if they seek to enter heaven. In much of the state, he lost ground between Nov. 8 and the runoff by several percentage points.

Other comments became fodder for Warnock’s attack ads. Walker extolled the virtues of “gas-guzzling cars” in a state that has aggressively tried to become a hub of electric-vehicle manufacturing. And, in comments that made him the butt of late-night jokes, he embarked on a lengthy tangent about werewolves and vampires.

Walker’s loss turns up the heat on Trump.

It will be hard — though not impossible — for Trump to wriggle his way out of this one. Walker had explored running for office long before 2022. But Trump, who had known Walker since the 1980s, when he owned the New Jersey Generals football team in the short-lived USFL, almost single-handedly made Walker’s candidacy a reality.

“Wouldn’t it be fantastic if the legendary Herschel Walker ran for the United States Senate in Georgia?” Trump said in March 2021. “He would be unstoppable, just like he was when he played for the Georgia Bulldogs, and in the NFL. He is also a GREAT person. Run Herschel, run!”

Run Walker did, jumping into the primary even after four Republican candidates had already announced their campaigns, including Gary Black, the agriculture commissioner and establishment favorite. Black warned that Walker’s “baggage” would hurt him.

Yet none of Walker’s rivals could match his celebrity wattage. He barely broke a sweat in the primary, winning with 68% of the vote.

“Once people realized it was baked in,” lamented Seth Weathers, a Republican consultant, “they just rallied around Herschel.”

During the runoff, Republicans made clear that they wanted Trump to stay away. Instead of one of his signature MAGA rallies in Georgia, the former president was reduced to holding a conference call to support Walker that was closed to the news media.

Many Republicans, previously mindful of the former president’s capacity for survival, are now shedding their caution. “If Georgia Republicans want to keep laying in the mud with Donald Trump,” said Lt. Gov. Geoff Duncan, “it’s going to be a purple state.”

Even before Walker’s loss, Republicans of all stripes were eyeing Gov. Ron DeSantis of Florida as a preferable alternative in 2024, and he has gained ground against Trump in every major poll since Nov. 8. This week has been brutal for Trump: On Monday, a parade of Republican senators lined up to condemn his recent call to suspend the Constitution; on Tuesday, a jury convicted his company of tax fraud.

As the runoff outcome became clear, Scott Jennings, a former aide to Sen. Mitch McConnell, observed that “Georgia may be remembered as the state that broke Trump once and for all.”

Georgia will again be a key state on the presidential map in 2024.

Watching the explosive growth of metropolitan Atlanta over the past decades, and especially the surge in Asian American and Latino voters, Republicans began to worry that their grip on the state was eroding.

They watched in 2016 as Hillary Rodham Clinton flipped Cobb County, a fast-diversifying former Republican stronghold in the Atlanta suburbs, on her way to losing the state by just 5 percentage points. In 2018, when Stacey Abrams came within 1.4 points of beating Kemp in her first race for governor, she won Cobb by nearly 10.

But it’s simplistic to say that demographics is destiny. On Nov. 8, Republicans won every statewide office other than senator, including Kemp’s, by an average of about 7 points.

That makes Warnock’s victory all the more remarkable. But it was by no means foreordained, and a stronger opponent might have beaten him. Had Warnock lost, many would now be questioning whether the Democrats’ victories in 2020 and 2021 were anomalies. After all, Biden won the state by fewer than 12,000 votes.

The president, in a sign of how centrally he views Georgia to his reelection hopes, has urged his party to add the state to the early presidential nominating calendar in 2024. There’s just one problem: Republican officials in Georgia will get to decide if that happens, and they’ve already poured cold water on the idea.

Either way, the path to 270 Electoral College votes looks much the same for Biden in 2024 as it did in 2020: Win every swing state in the Midwest plus Nevada and New Hampshire, and keep Arizona and Georgia blue just in case.

Democrats have built a turnout machine in Georgia.

Much has been made of the Democrats’ astonishingly durable coalition in Nevada, the core of which is unionized casino workers in Las Vegas. But Democrats have assembled a no less formidable turnout operation in Georgia, a much larger and more geographically complex state.

Although metropolitan Atlanta represents nearly 60% of the electorate, to win the big statewide races, Democrats needed to find pockets of new voters elsewhere, too. Black communities in places like Albany, in southwest Georgia, often went neglected. In 2017, Abrams made a statement by announcing her campaign there rather than in Atlanta.

“One of the things we’ve done better with is not running a metro-centric campaign, building organizing infrastructure across the state,” said Jonae Wartel, who directed the 2021 runoffs for Democrats.

Another secret to Democrats’ success in Georgia is patience. A core network of organizers has stuck around for years, building relationships across the state and prioritizing local roots. After the 2021 Senate races, the state Democratic Party immediately hired several of the top brains behind Warnock’s and Sen. Jon Ossoff’s field teams, then asked them to write detailed reports on what they had learned.

“There’s a year-round organizing conversation in Georgia,” said Nse Ufot, the former CEO of the New Georgia Project, a nonprofit that became an organizing hub for activists across the state. “It’s not transactional.”

If Georgia Republicans were hoping that making it harder to vote would help them win back the Senate seat they lost in 2021, they were wrong. And there are signs that the changes they put in place might have backfired in some respects.

The battle over voting rights kept Warnock’s base busy between elections. In 2021, when Republicans passed a major new voting law that Democrats and civil rights groups denounced as an attempt to suppress Black votes, the machine went to work. Warnock’s strategists adjusted their voter contact plans accordingly, while outside activists held protests, organized petition drives and basically kept their network buzzing all year.

For Gerald Griggs, the president of the Georgia chapter of the NAACP, the lesson is not that the outcry over the law was a false alarm, as Republicans have insisted.

Anticipating long lines at the polls, civil rights groups planned “parties to the polls” all over the state, featuring water and live entertainment, just beyond the minimum distance from polling locations mandated by the new rules. And the NAACP threatened to sue counties that allowed frivolous lawsuits under provisions of the voting law that allowed unlimited challenges to individual ballots.

“African Americans in this state know how to mobilize,” Griggs said. “But you shouldn’t have to out-organize voter suppression.” 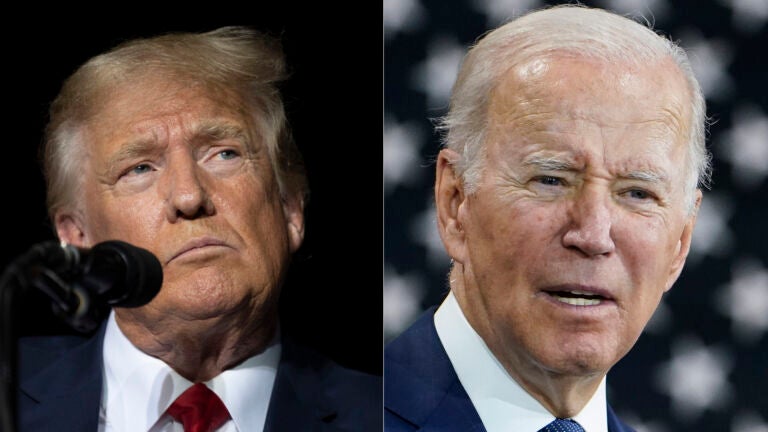 Out with the old, in with the new: UMass poll shows support for a presidential age limit