MINNEAPOLIS – The four former Minneapolis police officers charged in George Floyd’s killing are scheduled to make another court appearance Monday as prosecutors appear to be moving to try them in one trial, a move that is likely to be vigorously opposed by defense attorneys who say their clients are already at risk of facing an unfair jury. 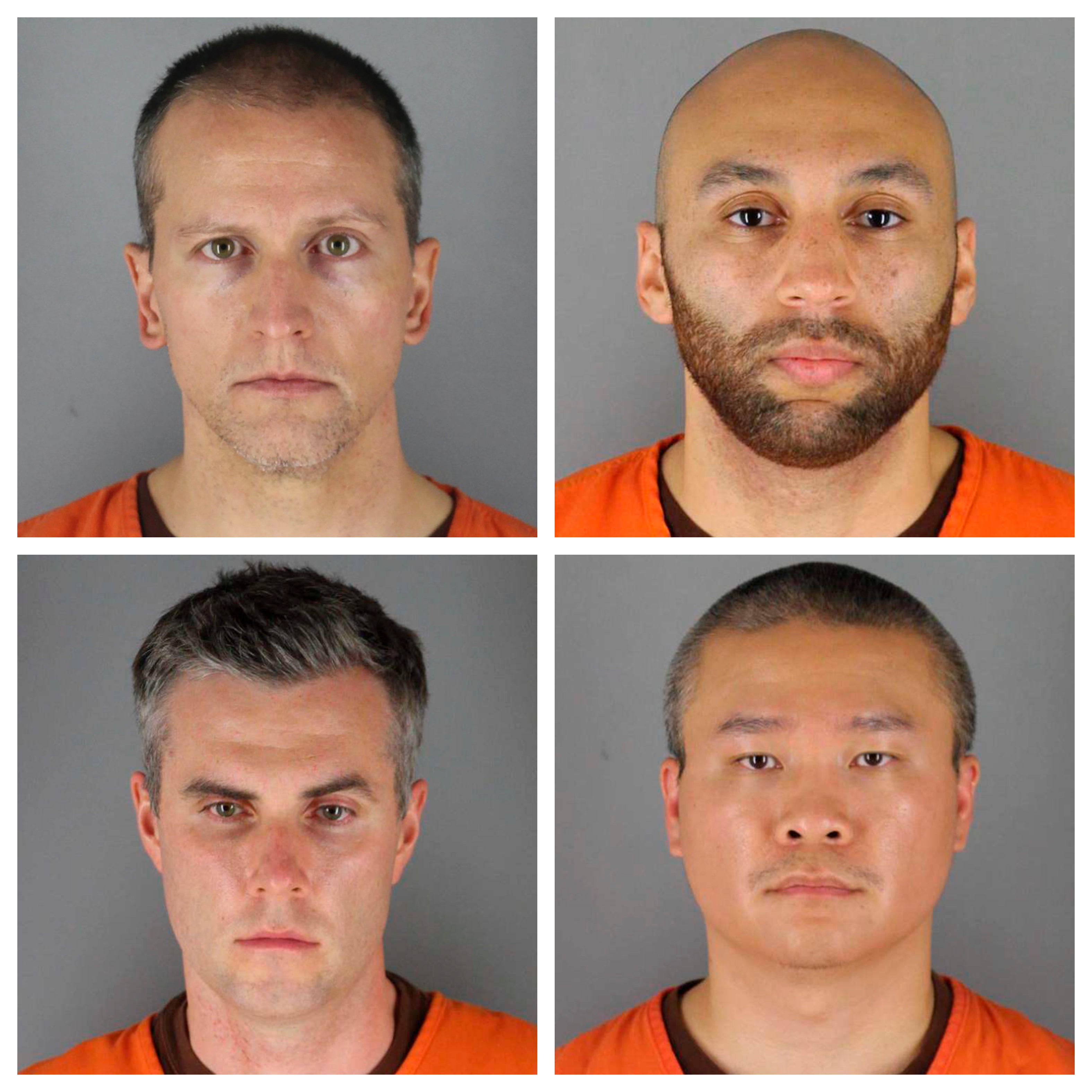 Top row from left, Derek Chauvin, and J. Alexander Kueng, bottom row from left, Thomas Lane and Tou Thao. Chauvin is charged with second-degree murder of George Floyd, a black man who died after being restrained by him and the other Minneapolis police officers on May 25. Kueng, Lane and Thao have been charged with aiding and abetting Chauvin.

Separate hearings had been scheduled for Derek Chauvin, Tou Thao, Thomas Lane and Alexander Kueng, but they were consolidated. Hennepin County Judge Peter Cahill was appointed this month to oversee the cases.

Attorney Ben Crump, who is representing the Floyd family, told the Star Tribune that Minnesota Attorney General Keith Ellison, whose office is prosecuting the case, informed Floyd’s relatives in a private meeting last week that a single trial will be scheduled for March 8, with a pretrial hearing set for Sept. 11.

A spokesman for Ellison did not respond to a request for comment. The upcoming court schedule is expected to be discussed at Monday’s omnibus hearing, in which the former officers could be asked to enter formal pleas in the case. Three are expected to attend the hearing in person; Chauvin will appear remotely from a state prison where he is being held on a minimum $1 million bail.

Lane and Kueng are both out on bail. Thao is being held at the Hennepin County jail on a minimum $750,000 bail.

The legal maneuvering comes about a month after Floyd, a 46-year-old black man, was pinned at the neck under Chauvin’s knee on May 25. Chauvin, who is white, has been charged with second-degree murder. The others have been charged with aiding and abetting.

The prospect of a single trial probably will be challenged by at least two of the defendants. Attorneys for Kueng and Lane have argued that their clients, rookies who had been full-time officers for less than half a week, were following the orders of Chauvin, a 19-year-veteran of the department who had been their field training officer. They argue that their clients tried to intervene but were rebuffed by Chauvin, the senior officer at the scene.

“The fellow in the front is a training officer. They’re required to call him ‘Sir.’ He has 20 years’ experience,” Earl Gray, the defense attorney for Lane, said of Chauvin during a recent bail hearing. “What is my client supposed to do but to follow what the training officer said? Is that aiding and abetting a crime?”

Charging documents, citing police body-camera footage, say Lane twice asked Chauvin if they should “roll” Floyd onto his side, including right after the man stopped moving. “I am worried about excited delirium,” Lane told Chauvin, citing a forensic term that has been used by medical examiners to describe the sudden in-custody death of individuals who might be under the influence of drugs or in an agitated state.

Advertisement:
“That’s why we have him on his stomach,” Chauvin replied, according to court records citing the footage.

When Floyd stopped moving, Lane again pressed to roll him over, according to charging documents, but Chauvin didn’t move. Kueng checked Floyd’s right wrist and told the others he couldn’t find a pulse, according to prosecutors. “He was trying to . . . communicate that this situation needs to change direction,” Thomas Plunkett, Kueng’s attorney, argued at a recent bail hearing.

But videos indicate that Chauvin stayed put until paramedics arrived.

The move to shift blame to Chauvin has been rejected by state prosecutors as well as Minneapolis Police Chief Medaria Arradondo, who has said that being a rookie is no excuse for an officer not to intervene when they see another officer doing something wrong.

“The policies that I put out for the department, those policies are not guided in years of service. I don’t put policies out to say that you should only react or respond if you’re a two-year member or a five-year member or a 10-year member,” Arradondo said this month. “And if policies or subculture get in the way, then I expect, and I demand, one’s humanity to rise above that.”

“George Floyd’s tragic death was not due to a lack of training – the training was there. Chauvin knew what he was doing,” Arradondo said in a statement. “The officers knew what was happening. One intentionally caused it, and the others failed to prevent it. This was murder; it wasn’t a lack of training.”

Arradondo’s statement was quickly cited in court by the defense, arguing that the objectivity of their cases has been compromised. In an unusual move, attorneys for the four men filed a joint court motion Thursday in support of news media requests, including from The Washington Post, to allow audio and video recording of upcoming hearings, to counteract officials’ critical statements about their clients.

Plunkett, writing for the defendants, cited “unethical leaks” and “many prejudicial comments” from public officials including Arradondo and Ellison, and said having open media coverage of the hearings would give their clients a better chance at a fair trial.

“This relief is necessary to blunt the effects of the increasing and repeated media attacks from various officials who have breached their duty to the community,” Plunkett wrote, adding that audio and video coverage would “let a cleansing light shine on these proceedings.”

Under the rules of Minnesota courts, both the prosecution and the defense must agree to permit cameras and audio recording equipment in the courtroom. In a motion filed Friday, Cahill, the presiding judge, ruled that there would be no additional coverage of pretrial hearings, citing an objection from prosecutors and concerns about tainting the jury pool.

He said he would address media coverage of the trial at a later time.