Before Fayetteville, Ark., Mayor Lioneld Jordan started to directly address the toll racism takes on the health of his non-White residents, he said there was a lot he did not know about the problem. After learning more, he had a choice to make: ignore the issues or try to make them better.

“It’s like you’re not as responsible when you don’t know,” Jordan, a Democrat, said at a meeting in mid-August during which the city council was set to vote on a resolution that would declare racism a public health emergency in the town of 88,000 people that is nearly 80% White. “But when you do know, and you don’t make changes, that’s when you’re really wrong.”

After a period of mostly supportive public comment — during which many Fayetteville residents remarked that such legislation was long overdue — the city council passed the resolution with an 8-0 vote.

The move added Fayetteville to a list of more than 50 American municipalities — including Boston and Cambridge — plus Michigan, Ohio and Wisconsin, that have passed legislation or made a formal declaration in the past year that racism is a public health crisis.

The push to highlight racism as a public health threat, one that shortens lives and reduces quality of life in a manner similar to smoking or obesity, gained momentum in the summer. The coronavirus pandemic and police brutality have emerged in recent months as inescapable crises that have killed non-White people at disproportionately higher rates.

On Sept. 3, Rep. Ayanna Pressley, D-Mass., introduced the Anti-Racism in Public Health Act, a bill that would formally identify systemic racism as a public health crisis in the United States.

The measure, which has Rep. Barbara Lee, D-Calif., and Sen. Elizabeth Warren, D-Mass., as co-sponsors, would create a National Center for Anti-Racism within the Centers for Disease Control and Prevention to develop anti-racist federal health policies. It would also create programs within the CDC’s Center for Injury Prevention and Control focused on preventing violence by law enforcement.

“For far too long, our federal government has failed to recognize and address the structural racism that has devastated Black and brown communities and denied access to quality health care,” Pressley said in a statement on Sept. 3.

‘What options are available to people?’

In May 2019, Milwaukee became the first U.S. city to declare racism a public health crisis; it’s considered the most segregated city in the United States and among the worst places for Black residents because of disparities in income, housing and incarceration rates. In 2018, Milwaukee also had one of the highest mortality rates for Black residents in the United States and the highest-in-the-nation infant mortality rate for Black babies.

Mary Bassett, a physician and the director of the FXB Center for Health and Human Rights at Harvard University, said racism in policies such as redlining and job discrimination is a key factor in producing unequal outcomes by race.

Naming the racist foundations of these policies “acknowledges that since the beginning of vital records-keeping in the U.S., there have been vast differences in health and life expectancy,” Bassett told The Washington Post.

“There’s never been a time, not a single year, where the [U.S.] population of African descent hasn’t been sicker or died younger than whites,” Bassett said.

According to 2018 data from the CDC, there was a 16 percentage point difference in the mortality rates of Blacks vs. whites across all ages and causes of death. In real-world terms, the disparities can mean Black Americans in some cases have more than a decade shorter life expectancy than whites. In places such as Milwaukee, a Black resident’s life expectancy was, on average, 14 years shorter than a white resident’s, according to an April report by ProPublica.

“The usual go-to explanation is that it’s behavioral — that there’s something deficient in the culture or social mores or peer group behavior,” Bassett said. She called such beliefs outmoded and racist, and said public health declarations are important because they interrogate the systems and structures rather than dismiss inequalities as the fault of the individual.

“All of us should learn to be alert to arguments that say ‘the problem is the people,’ and ask ourselves, ‘what options are available to people?’ ” Bassett said.

Addressing racism as a public health issue is a powerful and necessary first step, Bassett said; she cautioned that it has to be first of many steps that follow, and that the process will take a long time: “We can’t expect this to be a five-year project.”

Other public health emergencies have taken a half-century or more to make significant gains. The U.S. surgeon general released the first report on the impact of smoking on public health in 1964, and the CDC continues to promote anti-smoking campaigns and health initiatives today.

What will ultimately distinguish effective efforts from symbolic or purely political ones will depend on where municipalities — or the federal government, if the Anti-Racism in Public Health Act passes — place their attention and budgets.

The bill would carve out money for research, data collection and grants focused on anti-racist public health interventions and the health impacts of systemic racism.

“Sensitivity training, implicit bias training, is not enough; it’s not a training issue,” Bassett said of weaker responses to addressing systemic racism. She said there’s no road map for how to stamp out racism, a system embedded in the history and culture of the United States.

“What the congresswomen have done is a first step; they’ve asked the CDC to use their skills to figure this out,” Bassett said. “The point is to begin — and not to undermine the process by saying ‘give me a road map or get out of the driver’s seat.'”

In the short term, effective policies could produce better data, greater visibility of issues, and federal programming that is commensurate with need, Bassett said.

Another challenge will be to protect public health leadership, which Bassett said is under threat at the city and state levels. Throughout the year, several public health officials in the United States — many of them women — have left their jobs amid threats and pushback stemming from the pandemic.

“And at the federal level, they seem to be missing in action. This is a source of great concern,” Bassett said. “We need declarations, and we also need leadership.”

President Donald Trump as recently as Sept. 1 dismissed the idea that systemic racism is a problem in the United States and has scoffed at the idea that white people experience greater privilege.

In statements, Pressley and Warren said they are working with their congressional colleagues to pass the bill, but they did not specifically address what kind of support or criticism the bill has received.

Ricardo Sanchez, a spokesman for Pressley, told The Washington Post in a statement Monday that Pressley was optimistic that the bill would gain traction during the historic moment of racial reckoning in the country.

“She will continue advocating for the bill’s passage and always welcomes her GOP colleagues to stand up against structural racism and in support of actively anti-racist policies,” Sanchez said.

Despite the challenges, Bassett said she shares the congresswoman’s optimism.

“I haven’t seen this sort of multiracial public outcry saying ‘this must stop,’ in 50 years,” she said. “I am very hopeful.” 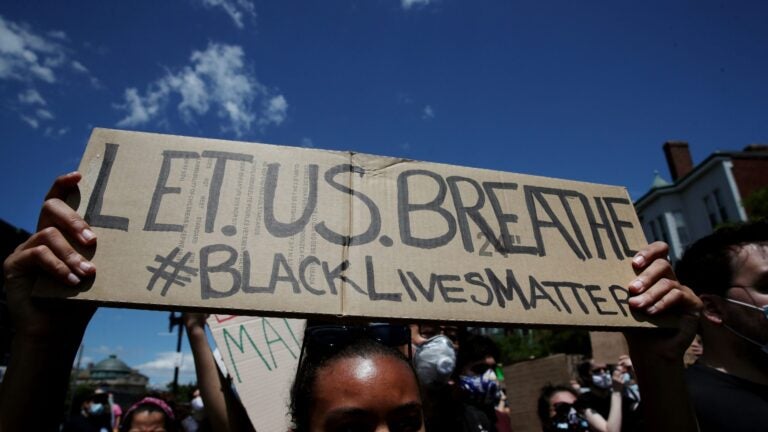