After stretching to buy a home, many buyers find themselves with little left over to fix the place up. But with a little planning and lots of patience, it is possible to find the time and money for all those home improvements. As one homeowner discovered, the secret is simple: Renovate one room at a time.

That is the approach Ryan Pittington took after buying his first apartment, an $855,000 two-bedroom, one-bathroom near the Castro in San Francisco. Instead of cutting corners so he could afford to redo the place all at once, or taking out a construction loan, he decided to slow-walk his home makeover, strategically building in pauses between projects so he could replenish his budget.

“I wanted it to look fresh and new,” said Pittington, 33, who heads user operations for Asana, a task-management app that helps teams organize, track and manage work flow. So he decided to start with “a little upgrade to make it look livable,” he said, and “wait to do larger projects.”

Gina Gutierrez, an interior designer who styled Pittington’s previous home, a rental apartment, drew up a master plan that prioritized some of the most impactful — and cost-conscious — upgrades.

The long-term approach allowed Pittington to save up for bigger jobs and take advantage of planned vacations for messy construction projects like sanding the walls. He was also able to take the time to save money for nicer furniture and finishes, instead of settling for cheaper items of lesser quality.

In the summer of 2015, a couple of months after Pittington closed on the apartment, he took a five-week trip to Ireland, and Gutierrez went to work on a few of the messier projects. The apartment had been a rental for many years before Pittington bought it, so there was layer upon layer of paint and wallpaper to scrape away and new electrical wiring to run. But it also had many charming original details that she wanted to highlight. 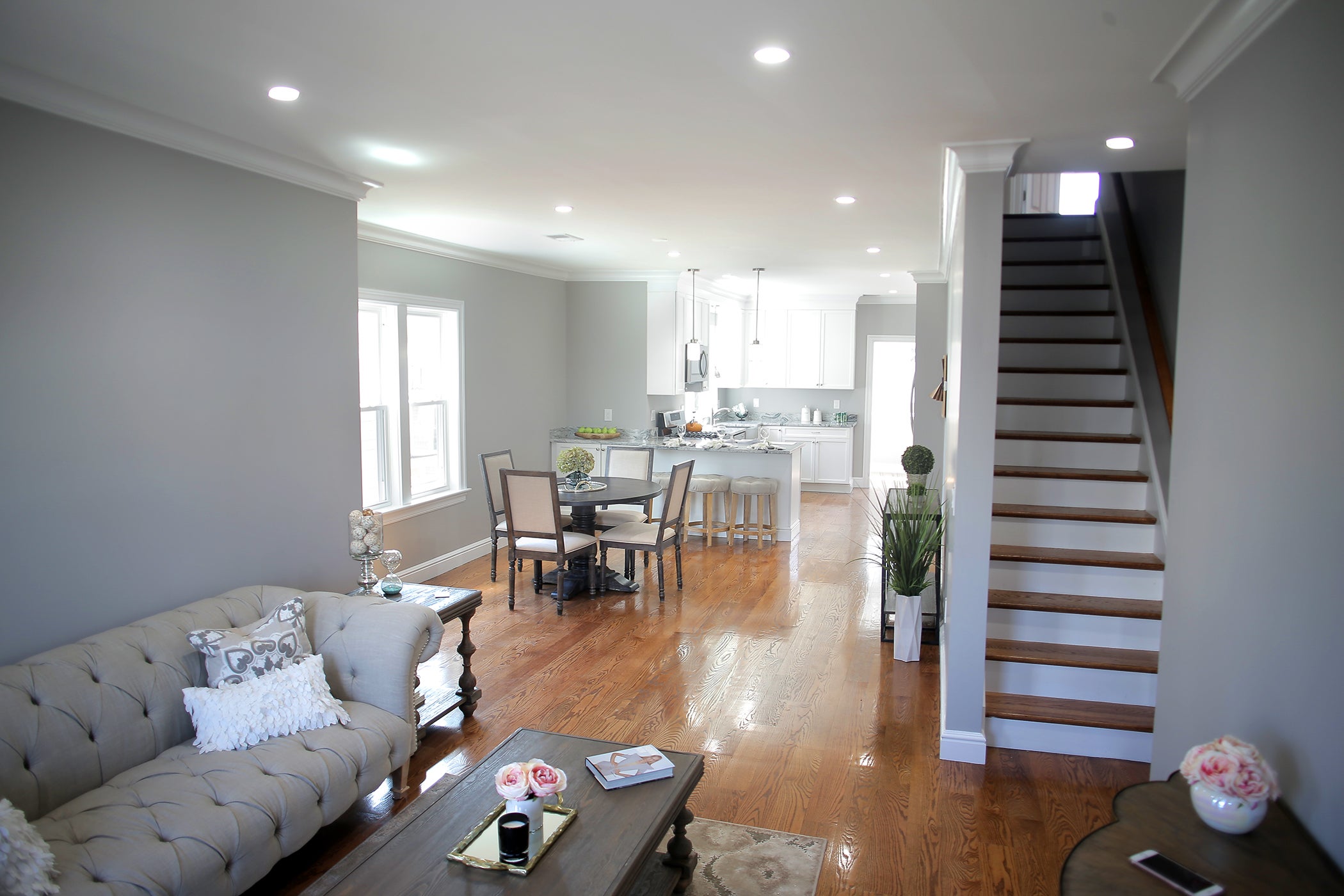 Gutierrez gutted the water closet, which houses the apartment’s toilet, replacing the window, covering the floor with three-inch hexagonal tile from Fireclay and painting the walls a moody gray.

Then she turned her attention to the living room and bedroom, which simply required styling and new furnishings. To keep costs down, Gutierrez used much of the furniture Pittington already had, including a swivel club chair from Jonathan Adler that she had reupholstered, as well as his sofa and side tables. Then she added accent pieces, like an indigo rug from Loloi to ground the space and a teardrop chandelier from Anthropologie.

Because the living room is at street level and has a lovely stained-glass window, she installed top-down, bottom-up shades that allow for privacy without covering up the stained glass.

“The bedroom is just a lovely retreat,” said Gutierrez, who added a bedside sconce from Cedar & Moss, a full-length mirror from West Elm to help create the illusion of more space and an opaque chandelier from Serena & Lily. “The walls are a calming blue-gray. The bedding, from Parachute, is a beautiful navy with a lot of layering.”

The next project — transforming the dining room into a library — was something of a passion project for Pittington, who likes to write in his free time. “Since I was little, I wanted a library,” he said.

Gutierrez had the walls painted in Hale Navy from Benjamin Moore, and covered the coffered ceiling, trim and ornate fireplace surround in White Dove. The original hearth shield was painted black. 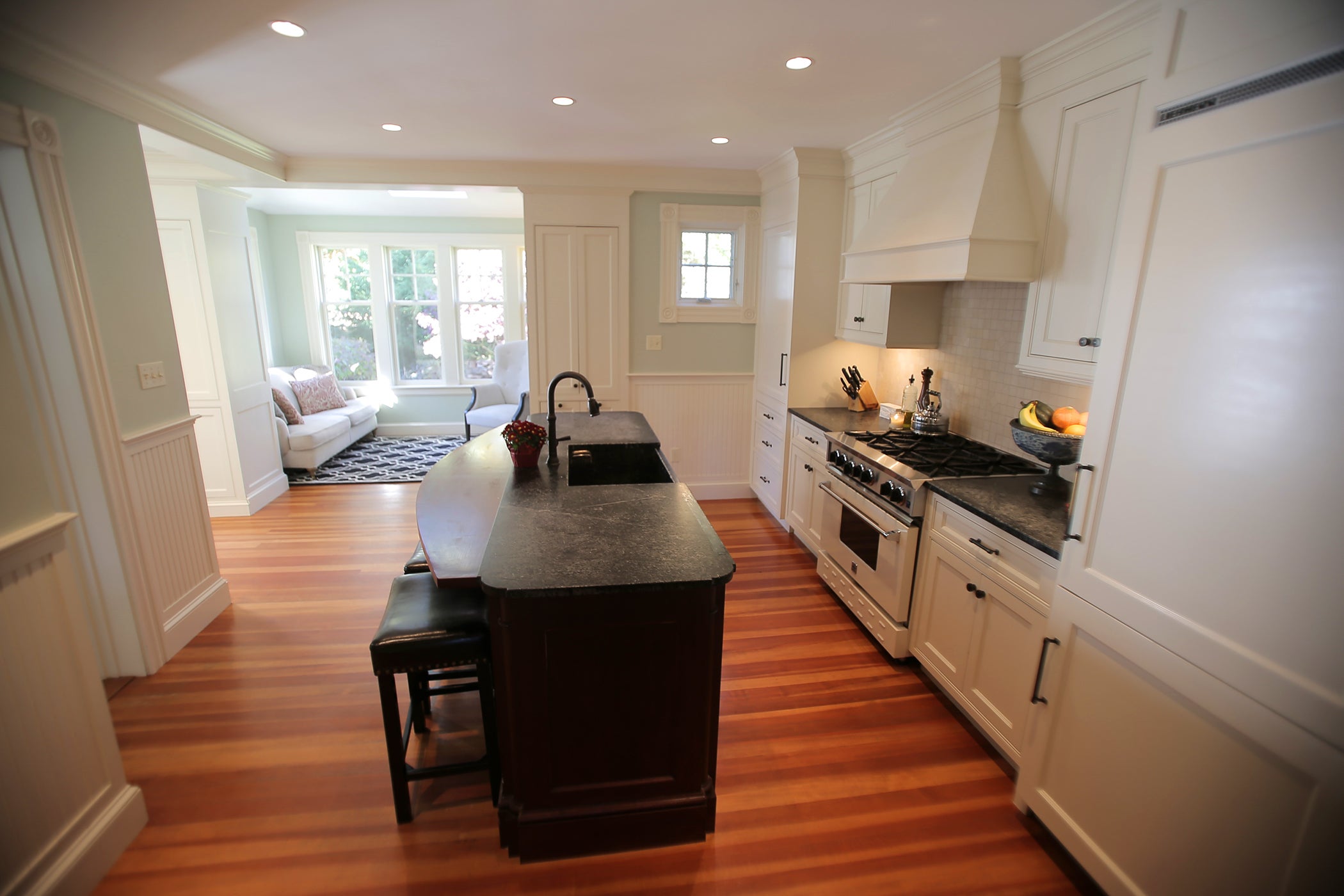 “It was just a matter of getting the right paint and furniture so he could relax and read,” said Gutierrez, who commissioned a wall of built-ins from a local carpenter and added a crystal-and-brass chandelier from Restoration Hardware and leather chairs from a local furniture store.

By early 2016, Pittington had saved enough to splurge on a home office. So Gutierrez went to work transforming the second bedroom — which has a bay window with a view of the Castro — into a “calming space that would spark creativity.” With a writing desk from Design Within Reach that faces the window, a standing desk by Imago Furniture along one wall and a midcentury-style leather sofa, “there are lots of options for movement and creating,” she said.

That spring, Pittington took another vacation and Gutierrez started work on the shower room, tearing out the travertine floors, the old bathtub with a low shower head and the pedestal sink.

The sink, which sat awkwardly on an angled wall, was moved to the wall next to the shower, and custom millwork by 12sticks was added along the angled wall. Glossy tiles in gunmetal black from Heath were installed on the wall between the tub and the ceiling, and stone-colored eight-inch hexagonal tiles from Cle were laid on the floor. The vanity, made from salvaged Russian oak, is from Restoration Hardware; the shower and faucet fixtures are from Kohler.

At some point, Pittington said, he would like to redesign the kitchen, opening up a wall between the breakfast nook, kitchen and laundry room. But with the rest of his apartment looking brand new, he knew he had to do something about the kitchen’s 90s décor before then. So last year, rather than dive into another gut job, Gutierrez focused on some simple upgrades to refresh the space, painting the cabinets Deep Silver and Hale Navy from Benjamin Moore, adding new hardware from Schoolhouse Electric, replacing the sink and countertops, and tiling the backsplash in Foggy Morning tiles from Fireclay.

“I thought I’d have everything but the kitchen done in a year,” Pittington said. “But when we started making the little budget calls, I kept erring on the side of getting the nicer finishes.”

So far, he has spent about $125,000 on the renovation, which has been stop-and-go for three years now — a process, he said, that has been a lesson in the rewards of delayed gratification.

“It was really easy and it felt really nice,” he said, “because it wasn’t like, ‘Now my house is totally new, and everything ages at the same time.’”

As he put it, “I’m constantly getting exciting little things.” 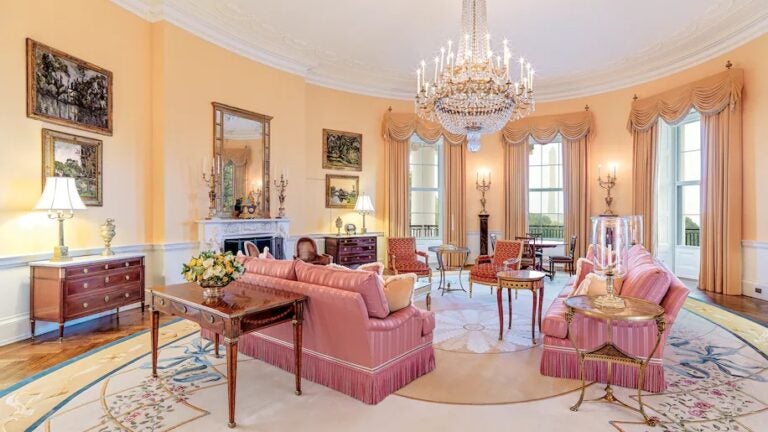