Across the country, food culture has shifted to people wanting to know the link between what’s on their plates and where it came from—and restaurants are following suit.

In Greater Boston, there’s been an influx of farm-to-table restaurants, describing their menus as “local and in season here in New England,” “honest,” “from farmers we know,” or “contributing to sustainable practices.”

So how do customers know for sure their food is really coming from a local farm to their table?

According to Michael Moore, director of Massachusetts’s Food Protection Program, they don’t.

Restaurants are regularly inspected by the state and city boards of health to make sure food is handled, stored, and cooked safely. Moore said the state also makes sure food is not being misrepresented in terms of its ingredients to help protect people with allergies.

However, when it comes to a food served at restaurants being true to its marketing, things get trickier.

According to the state Food Code, food must be “honestly presented.”

Inspectors aren’t checking if a restaurant is actually selling organic or locally sourced food during regular inspections though, according to Moore. Restaurants are required to keep invoices for ingredients, but for inspectors, the reviewing of receipts is more to track the origins of an airborne food illness or to investigate a complaint of fish being mislabeled, Moore said—a practice that went into effect after a 2011 Boston Globe investigative report found widespread seafood mislabeling at Massachusetts stores and restaurants.

If a customer did feel they were being misinformed by a restaurant regarding its “locally sourced” ingredients, boards of health would be responsible for investigating the complaints and enforcing the code if a violation was observed.

However, Moore said that since the Department of Public Health’s Food Protection Program does not have any written policies or guidelines for “farm-to-table” or “locally grown” designations (and no laws exist on the federal level), technically if a restaurant was not using local ingredients—even if it was being marketed as doing so—it wouldn’t be illegal.

“The term ‘farm-to-table’ is not referenced anywhere in the retail food code,” he said. “It’s a new term, and there’s no standard. Technically 100 percent of all food comes from a farm, somewhere. It’s considered more of a term that’s descriptive.” 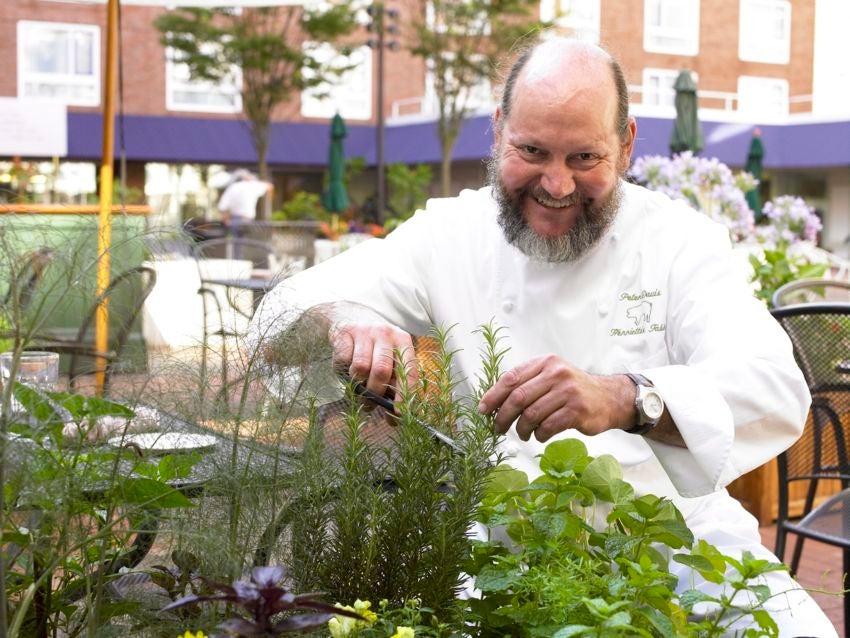 Davis, named “Sustainer of the Year” in 2010 by Chefs Collaborative, said only about five percent of his menu’s ingredients are locally sourced from the 20-plus New England farms he works with, and that’s a high percentage compared to other area farm-to-table restaurants serving three meals a day, he said.

“I think a big part of it is knowing how much a restaurant supports the local farming community,” he said. “… Our dollars of purchasing off local farms is much higher than most restaurants because I also purchase for the hotel. My farmers tell me I buy more local product than anyone else in the area.”

Davis said because each restaurant serves a different scale of diners and have different size business, regulating the mileage around local or the percentage of ingredients that must be sourced within that area for a restaurant to market itself as such would be difficult. He added it should be the chef’s responsibility, not the government’s, to know where their food is coming from.

“I think the government would better spend its time on bigger food issues in this country rather than defining local and the specifics of natural,” he said, referencing antibiotics in protein and GMO labeling. “Part of a chef’s job is that they should know how the meat they are buying is being raised, how their fish is being caught, how the fish is raised, how the animals on farms are treated.”

Davis and Moore both said the best thing a customer can do if concerned about the origins of their food is ask questions.

Moore suggested asking waitstaff or managers questions like, “Where does this come from?,” “What does local mean to you?,” or “What does organic mean to you?”

“I think most of the restaurants I’ve inspected want to maintain their good reputation and their conversations with customers,” he said. “So the best thing to do is to continue to talk with the establishments you eat at.”

Davis agreed, saying any restaurant that is claiming to serve locally sourced food should be aware of the farms they are specifically working with and how much the restaurant is buying from them.

“It’s hard in this area in the winter time to do a lot of farm direct, but in the summer time it’s much easier,” he said. “So if a restaurant is saying they have local lettuce in the middle of January that would ring a bell for me.”

Moore said the Massachusetts Department of Agriculture does provide information and guides regarding seasonality of crops for the state, but added that anything customers would see sold at a farmers’ market is what should be reflected in menus during that respective season.

“Really anything you would do or ask at a farmers’ market, like getting to know the person selling you your produce, is the exact some thing you can do at a restaurant,” he said. “And if they answer your questions well and treat you well, then you keep going back there because you’ve built a relationship you can trust.”