Lionel Messi and the Argentina national soccer team found a taste of home in Arlington on Sunday.

Fresh off a dominant 4-1 victory at Gillette Stadium on Saturday, Los Albicelestes visited Tango Restaurant for a traditional Argentinian meal.

What an honor it was to host the Argentinean national team here at Tango. Suerte chicos!!Vamos Argentina!!!#tangoarlington #argentina #campeones#copaamericacentenario #copaamerica#tangorestaurant

(Messi, the legendary forward and most recent Ballon d’Or winner for best player in the world, is the bearded guy at the bottom right of the photo.)

Alissa Mermet, Tango’s manager, said the Argentine team had reached out to them last week to schedule a meal for about 50 to 60 players, coaches, and team employees.

The visit on Sunday afternoon was particularly memorable for her father Ricardo Mermet, the owner of the restaurant.

“It was really special for us because my father is from Argentina,” she said. “What a great Father’s Day gift to give to him, for them to come in, and him to meet the greatest soccer player in the world, who is from Argentina.”

Mermet said the players seemed like normal, down-to-Earth guys enjoying a lunch as a team all together.

“It seemed like this might not be something they do all the time,” she said. “It seemed like a special celebration for them to come here and have lunch and maybe have some wine and just be together.”

On Sunday, after their meal, Messi and the gang took time to pose for photos and sign paraphernalia, much of which will likely end up in frames on Tango’s walls. Tango also saved the chair that supported Messi, and they plan to put a plaque on it denoting the honor.

“I think the magnitude of it I didn’t really understand until they came in, until all the prep was happening, the police was here, [and] there were like 100 people outside waiting and trying to look in,” Mermet said. “It was quite a production but it was really, really special.”

Photos on Instagram captured Messi surrounded by crowds near the restaurant in the Arlington area.

Argentina is set to take on the United States on Tuesday night at 9 p.m. in Houston in the semifinals. 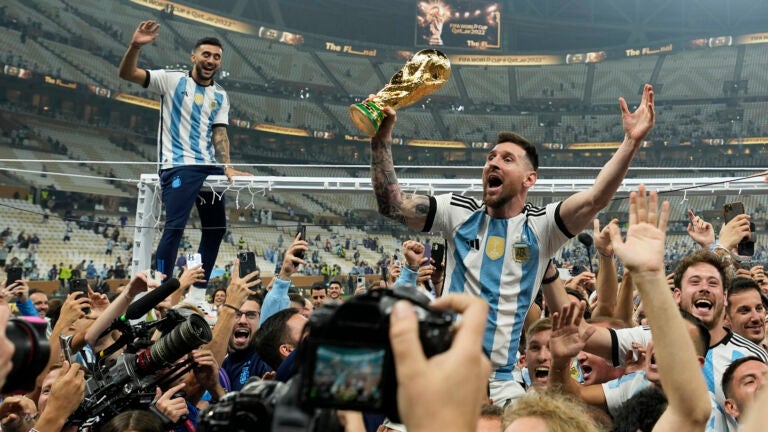