It’s not just in the name.

Dunkin’ Donuts’ decision to drop “Donuts” from its name at select locations has jarred some longtime customers. But the superficial change also belies the Canton-based company’s more sweeping attempt to reinvent its image and menu.

For now, Dunkin’ Donuts says many of the changes to its brand are limited tests. But permanent ones are coming.

Why are they shortening the name?

The first location to go by simply Dunkin’ opened in Pasadena, California, in August, with promises of more to come. Later that month, news broke that an experimental location in Quincy, which will open in December, would also use the truncated name. And this week, the first Dunkin’-only sign in Boston was raised at a soon-to-open location at 147 Tremont St.

Michelle King, a company spokeswoman, says the tests are part of an effort to “reinforce that Dunkin’ Donuts is a beverage-led brand and coffee leader.” (More on this below.)

“We have been referring to ourselves simply as Dunkin’ in our advertising for more than a decade, ever since we introduced our “America Runs on Dunkin’” campaign,” she said in a statement in August.

Likewise, Dunkin’ Donuts is already often colloquially referred to by customers by less than its full name.

“Most of us already call it Dunkin’ — or Dunks, or Dunkies, or some other abbreviated moniker,” The Boston Globe‘s Jon Chesto wrote in August. Chesto additionally reported that franchise owners aren’t particularly concerned by the potential change.

According to King, no permanent changes to the overall brand would be made until late next year.

“We do not anticipate making decisions regarding our branding until the latter half of 2018 when we begin rolling out our new store image,” she said.

The move to make Dunkin’ Donuts quicker to pronounce also comes amid a shift to streamline its services to primarily serve those who literally run on Dunkin’ — coffee addicts.

Look no further than the forthcoming experimental location in Quincy.

Located on the north side of Route 3A with an emphasis on mobile ordering and beverage sales, the new location is designed to cater to morning commuters to Boston in need of their daily fix.

According to the Patriot Ledger, it will feature four drive-thru lanes: one more-or-less conventional lane with a microphone to speak into and a window to pay at, two lanes with touch-screen kiosks that drivers use to order and pay by card, and one lane for people who ordered and paid online.

Dunkin’ Donuts also began paring down its menu at many locations this past summer in an effort to streamline its menu and service.

“We have conducted extensive consumer research and our customers have told us that our menu was too complex and confusing,” King told the Globe in July.

The reduced menu — which affected 1,000 of its 8,900 locations nationwide, including 100 in Massachusetts, and the entire Providence market — eliminates a wide array of sandwiches and baked goods. The company says the changes will not affect the Boston market.

A list of the products that would be phased out, which was confirmed accurate to the Globe, included all afternoon sandwiches, the majority of bagels, and several other bakery items. 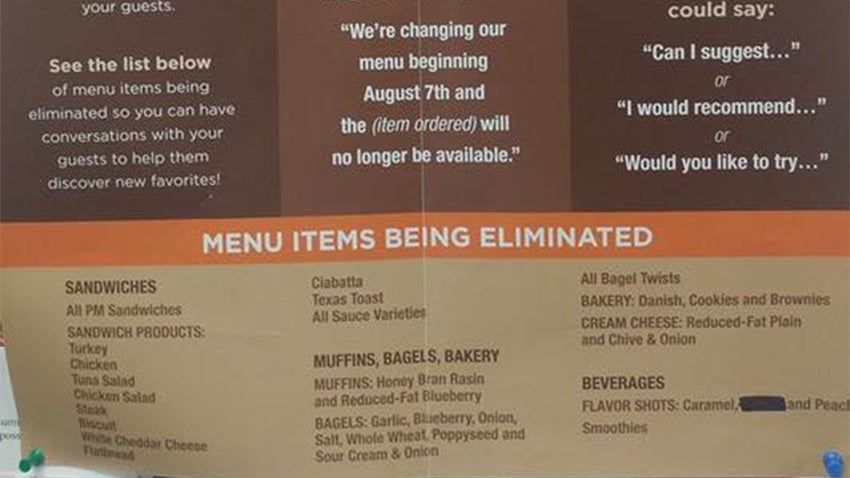 A photo of menu items to be eliminated from some Dunkin’ Donuts locations this past summer.

“It’s one of the most aggressive simplification efforts I’ve ever been part of,” David Hoffmann, the company’s president in the United States and Canada told Nation’s Restaurant News in July. “We’re eliminating close to a third of our menu items with minimal sales resistance.”

What’s happening to the doughnuts?

King stresses that Dunkin’ Donuts remains the country’s number one retailer of doughnuts and the company’s CEO Nigel Travis has said they want to keep that position.

However, Hoffman told NRN that the company needs to get its “doughnut mojo back” by decreasing the variety of doughnuts it offers from more than 30 to the 18-to-24 range. Hoffman said the company has seen “a lift” in the markets than have already done so. Concurrently, Dunkin’ Donuts is looking at how to replicate upscale doughnut shops, which have recently boomed in popularly, at “half the price.”

“Let’s not try to outdo a boutique shop, but let’s take their variety,” Hoffman said.

In truth, Dunkin’ Donuts’ shift away from its namesake product has been long-running; the flip side being its attempt to compete with and provide a cheaper alternative to Starbucks and similar chain cafes (and it’s not the only one).

The “America Runs on Dunkin'” slogan, a nod to coffee, was unveiled in 2006. In 2013, CFO Paul Carbone reportedly told investors that Dunkin’ Donuts was now definitely “a beverage company.”

“Fred the Baker is not coming back,” Carbone said, referring to the company’s classic “Time to Make the Donuts” commercial, which touted their then-vast assortment of yeasty treats.

Rather, the last several years have consisted of Dunkin’ Donuts expanding their coffee menu — from new high-end espresso drinks to dark roast and cold brew. The company is also pushing new premium hot and iced teas. Earlier this year, they even replaced the Coffee Coolatta, a menu staple since 1994, with a new lineup of smoothies and frozen drinks. The company also actively promotes its mobile app, rewards program, and on-the-go ordering.

It’s still unclear what Dunkin’ Donuts’ “new store image” will look like when it is rolled out next year. But one thing that is almost certain is that it will look far more like a Starbucks than the modest Quincy doughnut shop that opened in 1950. 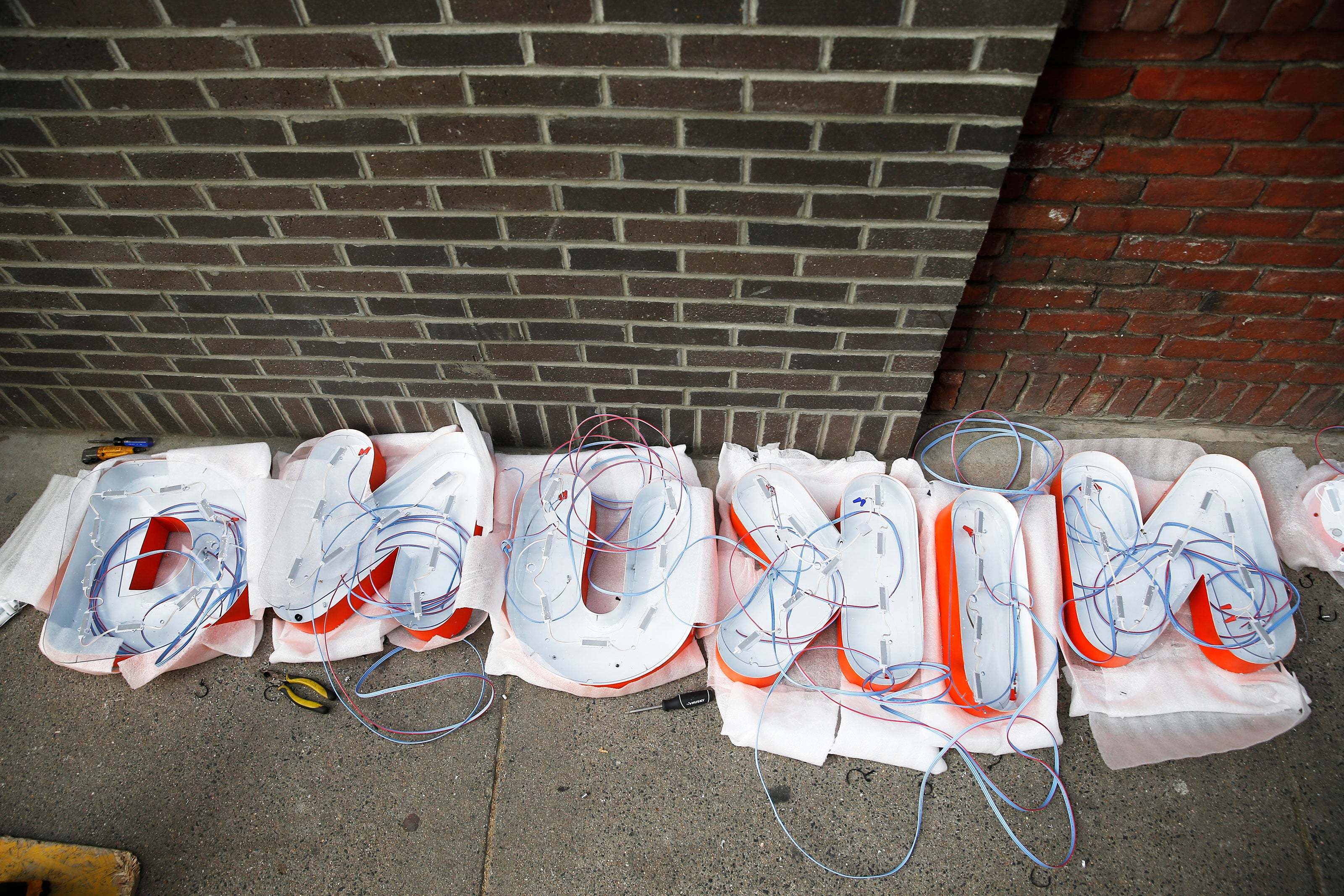 A new Dunkin’ sign lies on the ground on Tremont Street in Boston. 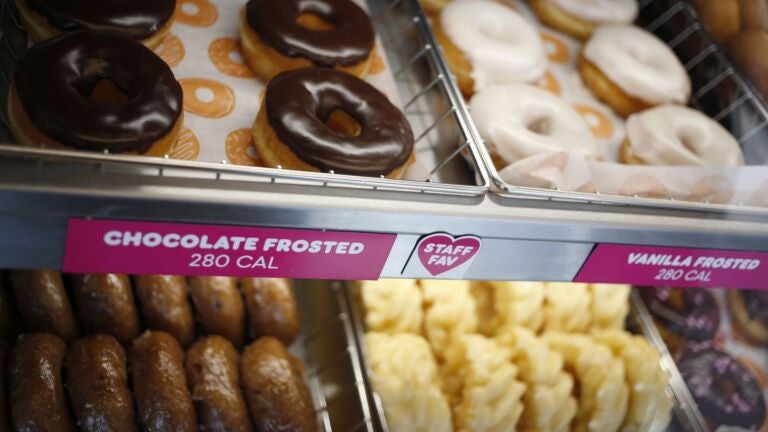