Grubhub is pushing back on a potential cap on fees charged to restaurants by third-party delivery companies in Boston, telling city councilors a limit on fees would be an “overstep” by local officials.

As the coronavirus pandemic has restricted eateries to only takeout and delivery service, councilors say many of the small businesses are being hit hard by fees from app-based delivery companies, including Uber Eats, Postmates, and DoorDash.

While fees and commission rates vary between vendors, officials say the delivery charges typically fall between 10 and 30 percent of the price of an order, leaving restaurants already struggling to stay in business during the economic shutdown hard pressed for profit.

“Boston desperately needs a cap,” Councilor Ed Flynn, a co-sponsor of the order behind a hearing Friday focused on the impact fees have on city establishments. “We need a cap because restaurants play an integral part in our community and in our neighborhood. They’re our neighbors.”

But Grubhub, the only one of the major delivery service companies that picked up the call from the council to testify, offered its “strong opposition” to such a measure.

Amy Healy, senior director of public affairs, said putting a limit on commission fees would, in practice, lower order volume to local restaurants and increase costs for operators who would be left to formulate their own in-house delivery options, which come with expenses Grubhub would otherwise manage on their behalf.

“Any cap on fees, regardless of duration, will result in damaging, unintended consequences for locally-owned businesses as we’ve already seen in other markets and unintended consequences for delivery workers, diners, and a local economy,” Healy said. “In fact, it will result in the exact opposite of what the legislation is trying to accomplish, and we believe that any cap on fees represents an overstep by local officials and will not withstand a legal challenge.”

Boston, should the council follow through on imposing a limit, would hardly be alone.

An emergency order passed in San Francisco last month capped fees at 15 percent, while the New York City Council opted to do the same earlier this month.

In April, the mayor of Baltimore asked companies to consider limiting what they charge to 15 percent. Cambridge recently capped fees at 10 percent.

“We’re looking for a solution between industry leaders and stakeholders, and we really probably shouldn’t even be in this space, but we’re here because we were brought here by members of the public who felt that the fees were a little over the top and they felt that some folks were taking advantage of people,” said Councilor Michael Flaherty, a co-sponsor of the hearing order.

But he and others lamented that Grubhub was the only delivery platform that took up the invitation to testify.

Kaitlin Passafaro, director of policy for the Mayor’s Office of Economic Development, told councilors the office has been in touch with the delivery companies about the issue.

“Our hope is that we can always build consensus rather than mandate,” Passafaro said, but added, “I think if we’re unable to bring folks to the table, (a cap is) an option we’re willing to explore.”

Restaurateurs say the delivery orders that once made up a minimal percentage of their overall sales now account for a large chunk of their business. With more orders to go, the system has become unsustainable for mom-and-pop eateries, they say.

John Schall, owner of El Jefe’s Taqueria in Harvard Square, said since restaurants were ordered to suspend dine-in service in March, 72 percent of his total sales have come through delivery orders.

Opting to put a business on one of the delivery platforms is a “double-edged sword” for restaurant owners, said Stephen Clark, vice president of government affairs for the Massachusetts Restaurant Association.

“They have to be on the platform in order to deliver food to their customers, but at the same time they’re held hostage by the different fees and the lack of transparency,” he said.

“I think if we don’t cap those delivery fees, restaurants like myself, the restaurants I’m involved in, will shy away from using delivery services because it just makes no financial sense,” Doyle said.

According to Healy, Grubhub charges restaurants and diners each a 10 percent delivery fee for each order. Restaurant owners are not charged to join the platform but can elect to sign up for certain, additional services, such as marketing, that mean a higher invoice, she said.

Delivery drivers keep 100 percent of the tips they earn, while restaurants are only charged when a sale is made, Healy said.

During the course of the pandemic, Grubhub and several other delivery companies have launched initiatives they say are aimed providing relief to independent restaurants.

The platform is also using “nearly all of our profits in the second quarter to generate as many additional orders for our restaurant partners as possible,” Grubhub founder and CEO Matt Maloney said earlier this month.

As a company, Grubhub reported a 12 percent year-over-year revenue increase in its first quarter earnings — totaling $363 million in revenues — this year, but the platform has incurred expenses related to COVID-19, resulting in essentially a 1 percent bump, Healy said.

“While our service is optional, the cost of running our business is not,” she said.

According to Clark, however, a number of MRA members have learned that third-party platforms have set up “ghosted” websites, where customers can order from their restaurants using the delivery service without the owners ever being informed of the website, raising concerns around communicating diner allergies and other issues.

Healy agreed the practice is a problem, but ultimately acknowledged Grubhub began doing the same last year in order to keep pace with competitors. She said the company is open to working with the MRA on a solution.

“I think the alternative is not doing it because it is a duplicitous practice and the fact that you’re charging more for a meal and setting up an online portal for restaurants that may not even know about it, that’s just very troubling,” Councilor Matt O’Malley said.

The council’s Committee on Small Business and Workforce Development is slated to revisit the topic in a working session, where officials could draft an ordinance. Should it be proposed, any cap would need a council vote to take effect. 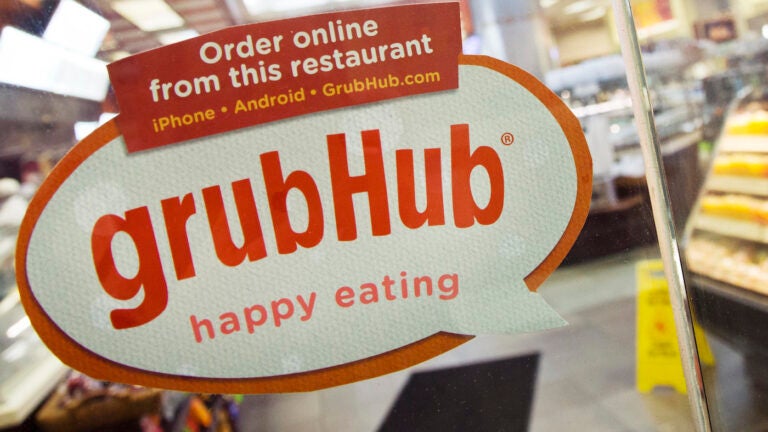