When Russia invaded Ukraine in late February, Quincy resident Andrew Smeaton was on a beach in Cancun on a business trip.

“I sent my wife a picture saying life doesn’t get better than this — it was just like that picture of your feet on the beach. And then 10 minutes later, my little BBC news alert goes on ‘Ukraine invaded by Russia,’” Smeaton told Boston.com. “So me, a piña colada, and my phone walked up to the room just to see what was going on.”

Initially, Smeaton said he thought it was a smaller invasion, but then he quickly realized Russia was truly attacking Ukraine. So he sprang into action.

He flew back to Boston, spent one night in the city, and then headed to Poland. The Boston-based tech business where Smeaton works as an executive has an office in Kyiv; he had co-workers stuck in the war zone.

Smeaton said his original plan was not to go to Ukraine. He intended to assist families from the Polish side of the border with logistics and then help them get to safety.

But his colleague Kris van Huystee and his family’s escape became more complicated than anticipated. The family had a dog and a cat they were not willing to leave behind, and many of the transportation options out of Ukraine either didn’t have room for pets or didn’t allow them, Smeaton said.

The family, who Smeaton was in constant communication with, lived in Kyiv. They tried everything to get out of the country, but nothing was working.

“One of the days he said to me, ‘Hey Andy we just heard shelling which was really scary,’ and so it kind of got worse for him and [it got] so bad that he was like, ‘I think we’re just going to try and walk to the border,’” Smeaton said.

Smeaton, who was in Poland at the time, recounted that he was wearing a big Patagonia jacket, which had always been enough for Boston’s cold, on top of a hoodie and two shirts, but he was still was freezing.

It would have been a more than 100-kilometer walk to the border for his colleague in those temperatures. Smeaton said the worsening situation for the van Huystee family was the decision point for him.

Smeaton’s next hurdle was to get into the country, even as a security company that was advising him was strongly suggesting he not go. He ended up approaching a Ukrainian family in Poland and trading his watch for their car so he could drive across the border.

Smeaton said he later went back and helped that family to repay them for their generosity.

“I remember just getting to the Ukraine side [of the border] and the Ukrainian border guards said, ‘Where are you going?’ And I said, ‘I’m going to Ukraine.’ And he said, ‘I know that. But why?’” Smeaton recalled. “He pointed and he said the Russians are ahead. And I said, ‘I’m going to get my friend,’ and he looked at me [with a] kind of sympathy and just waved goodbye like he would never see me again.”

At the border, the Quincy resident said he remembers seeing a stream of people trying to get out of Ukraine.

He was alone trying to get in.

“It was heartbreaking to see all the people. … The heartbreaking thing was, you see kids and their mothers and the kids are past crying and they are cold,” Smeaton said. “People, say a mother and three kids, they realize after walking a mile or a half-mile that they can’t take their luggage, so they just ditch the luggage on the side. It just gets down to the basic human stuff of survival.”

He made it to his co-workers house without issue, picked them up, and began the quiet journey back to safety.

All-in-all Smeaton said he was in Ukraine for about eight hours.

Since coming back, the Quincy resident has kept working with Ukrainian relief efforts as much as he can. He organized a silent auction fundraiser in mid-March to help refugees and another fundraiser is in the works.

He is also urging people to support an ongoing fundraiser that supports getting medical supplies, food, transportation, shelter, and other emergency needs to people still in Ukraine.

“It’s easy to watch this on TV, but when you are there, especially when you see the women and children and how impacted they are, it’s literally heartbreaking,” Smeaton said. “We’re supposed to be a more intelligent, caring world now. And [Russia has] really sort of turned back the clock with what they’ve done. It’s extremely sad for humanity.” 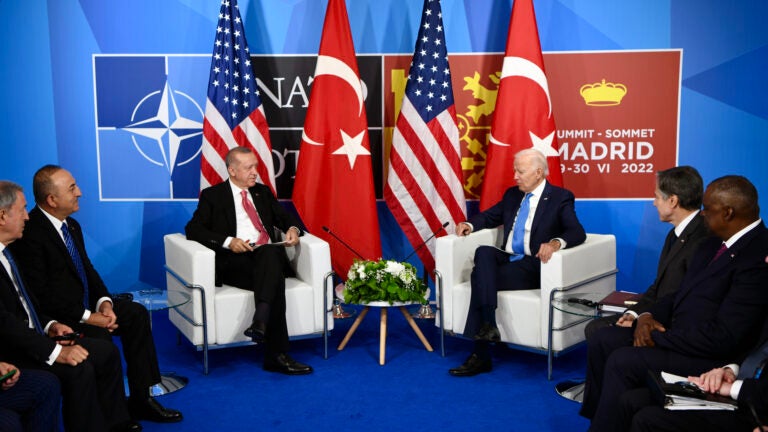