Daniel Levin’s son, Linus, 7, was supposed to be doing math. Instead, he pretended to take a shower in the living room, rubbing a dry eraser under his arms like a bar of soap, which upset his 5-year-old sister, distracting her from her coloring.

As much as he tried, Levin, who lives in Brooklyn, New York, could not get Linus to finish the math. His hopes for the reading assignment were not high, either.

“He’s supposed to map out a whole character trait sheet today,” Levin said one day last week. “Honestly, if he writes the name and the age of the character, I’ll consider that a victory.” 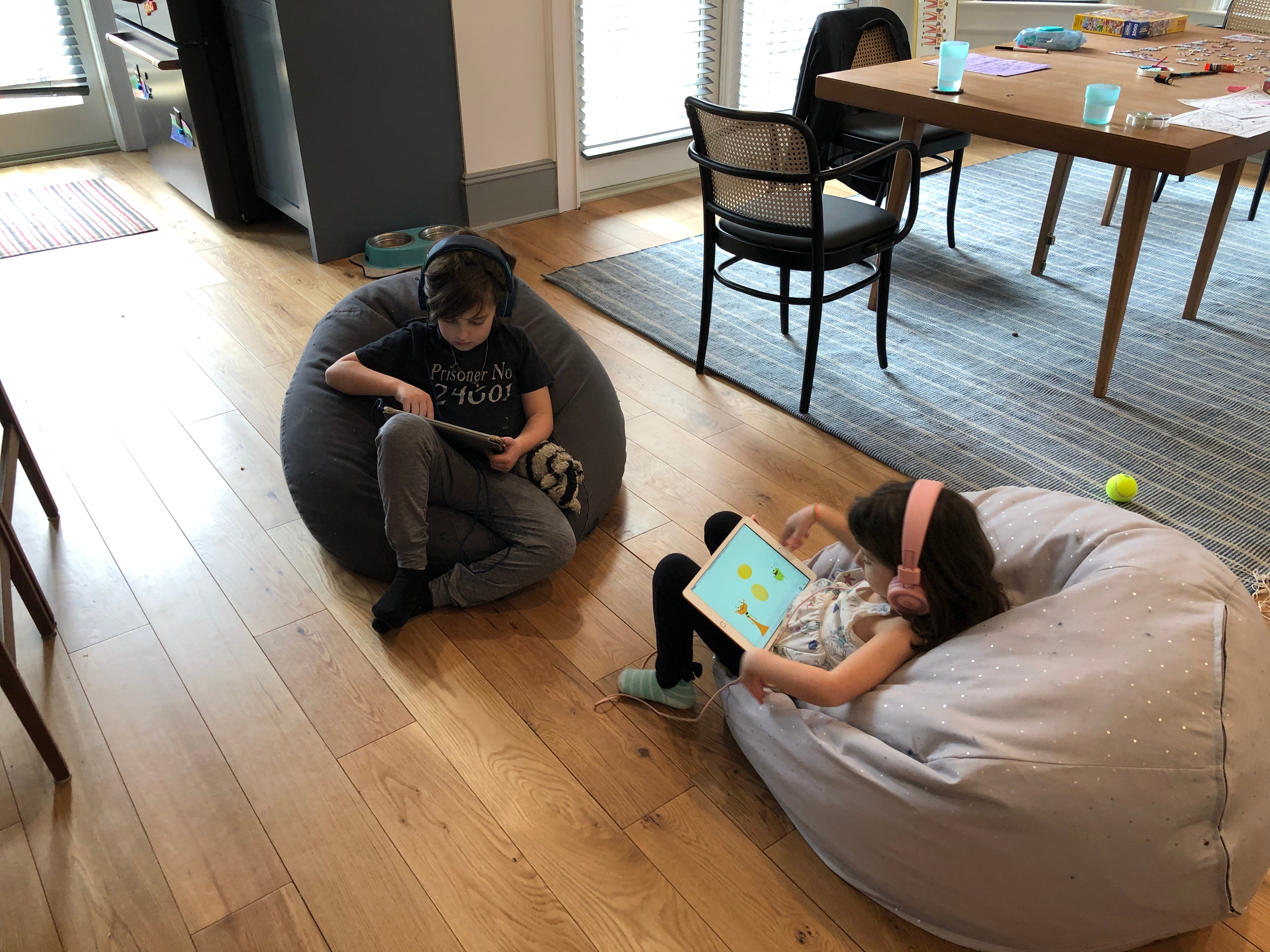 A triumph: Linus Levin, 7, and Ramona Levin, 5, doing math on their iPads.

Ciarra Kohn’s third grade son uses five different apps for school. Her 4-year-old’s teacher sends lesson plans, but Kohn has no time to do them.

Her oldest, a sixth grader, has eight subjects and eight teachers, and each has their own method. Sometimes when Kohn does a lesson with him, she’ll ask if he understood it — because she didn’t.

“I’m assuming you don’t, but maybe you do,” said Kohn, of Bloomington, Illinois, referring to her son. “Then we’ll get into an argument, like, ‘No, Mom! She doesn’t mean that, she means this!’ ”

Parental engagement has long been seen as critical to student achievement, as much as class size, curriculum and teacher quality. That has never been more true than now, and all across the country, moms and dads pressed into emergency service are finding it one of the most exasperating parts of the pandemic.

With teachers relegated to computer screens, parents have to play teacher’s aide, hall monitor, counselor and cafeteria worker — all while trying to do their own jobs under extraordinary circumstances. Essential workers are in perhaps the toughest spot, especially if they are away from home during school hours, leaving just one parent, or no one at all, at home when students need them most.

Kindergartners need help logging into Zoom. Seventh graders need help with algebra, last used by Dad circa 1992. “School” often ends by lunchtime, leaving parents from Long Island to Dallas to Los Angeles asking themselves the same question: How bad am I if my child plays “Fortnite” for the next eight hours?

Yarlin Matos of the Bronx, New York, whose husband still goes to work as a manager at a McDonald’s, has seven children, ages 3 to 13, to keep on track. She spent part of her stimulus check on five Amazon Fire tablets because the devices promised by the city’s Education Department had not arrived.

Matos, a psychology major at Bronx Community College, said she must stay up late, sometimes until 3 a.m., trying to get her own work done.

“I had a breaking moment where I had to lock myself in the bathroom and cry,” she said. “It was just too much.”

Laura Landgreen, a teacher in Denver, always thought it strange that she sent her two sons, Callam Hugo, 4, and Landon Hugo, 7, off to school rather than home schooling them herself.

She doesn’t find it strange anymore. “My first grader — we would kill each other,” she said. “He’s fine at school, but here he has a meltdown every three seconds.

“I need to teach other children,” she said. 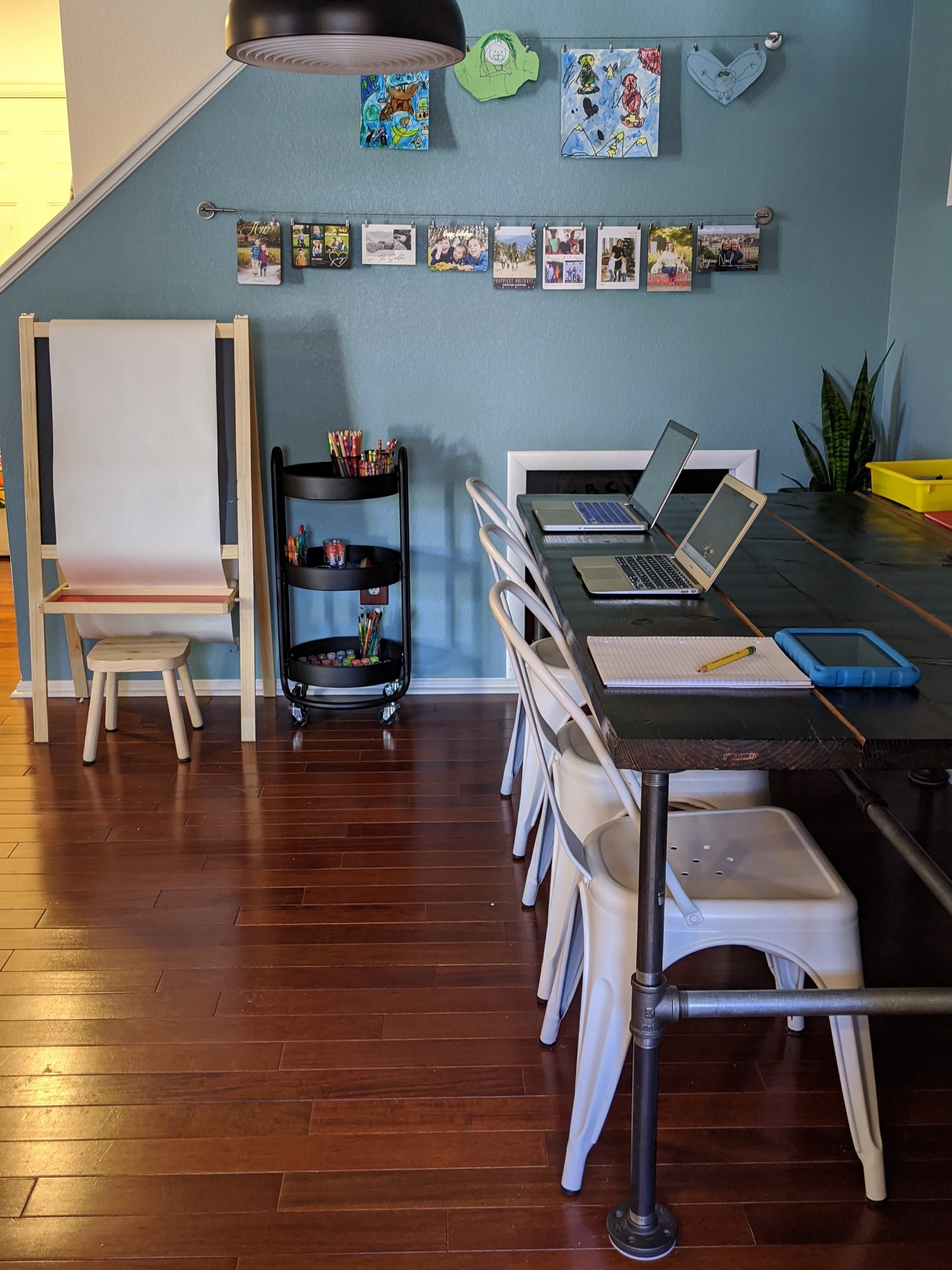 A little corner of Laura Landgreen’s home in Denver is now a classroom. Landgreen, a teacher, said it can be easier to teach a room full of students than one’s own children.

There is widespread concern that even with remote learning in place, many students will return to school behind where they would have been if they’d been in the classroom. (President Donald Trump said Monday that governors should consider reopening schools before the end of the school year.) Teachers had little time to prepare for remote learning, and many children had inadequate or no computer access.

For students without close parental guidance, the outcome could turn out even worse.

Ronda McIntyre, a fifth grade teacher in Columbus, Ohio, said that of her 25 students, only six were participating consistently, generally the ones whose parents were already in regular communication with their teacher.

Other families have reached out to McIntyre to say that they are too overwhelmed with their own work to help with the lessons at home. And some have told her they are trying but that their children won’t cooperate.

“She gets frustrated every time we start,” one mother emailed her last week, “and then I get irritated and she gets irritated and it usually ends in me saying we should take a break and then the cycle repeats. One or both of us typically ends up in tears by the time it’s all said and done and no work is completed.”

Even parents who describe running tight ships at home say they are anxious about what months away from classrooms will mean for their children. They are also finding it hard to accept that 25-minute Zoom classes or lessons sent by email is what school has been reduced to.

The litmus tweet of the moment came from Sarah Parcak, an archaeologist at the University of Alabama at Birmingham.

“I told our son’s (lovely, kind, caring) teacher that, no, we will not be participating in her ‘virtual classroom,’ and that he was done with the 1st grade,” she wrote on Twitter in early April. “We cannot cope with this insanity. Survival and protecting his well being come first.”

We just wrote a hard email. I told our son’s (lovely, kind, caring) teacher that, no, we will not be participating in her “virtual classroom”, and that he was done with the 1st grade. We cannot cope with this insanity. Survival and protecting his well being come first.

“In terms of the online reaction, I would say on Twitter, probably 95% of the reaction has been positive,” she said in an interview. On Facebook, which has more favor among the pre-millennial crowd, the reaction was more mixed. Many people praised her decision, while others criticized her as dismissing the hard work of teachers and doing a disservice to her child.

“On Facebook, the mommy wars have come,” she said, “and I’m the hill people are willing to die on from both sides.”

Education experts advise that making a schedule can help children treat the current setup more like school, as can being clear about when it’s work time and when it’s play time, using a timer, for example, to delineate when they are in “school.” Creating a dedicated space for them to work can also be helpful.

And parents should take it easy on themselves on days when things don’t go as planned.

“Are your kids killing each other, or have you killed your child?” said Kathryn Hirsh-Pasek, an education researcher and a senior fellow at The Brookings Institution. “Is there anything they’re eating that resembles healthy food in between the chocolate and sugar? If the answer is yes, give yourself a break.”

As stressful as it can be, of course, it’s not a crisis for everyone. Behold Helen Williams-Morris, a mother of three children and a cafeteria worker at a school in Memphis, Tennessee.

She said that all her children are fairly self-sufficient. Her son is in college, and her middle child, a ninth grader named Camille, has been taking care of her work on her own. She attends Crosstown High, a charter high school that uses a lot of technology in normal times.

Williams-Morris also has a 6-year-old, Calyah, but she said that if she plops her at the dining room table, she can make a meatloaf or some grits in their open kitchen while the child does her work. Williams-Morris just peeks over now and again to help with any questions and to make sure Calyah hasn’t switched the screen over to “Minecraft.”

“But I wouldn’t say this is easy for me,” Williams-Morris said. “I like talking to other adults.”

Kim Pinckney-Lewis of Mechanicsburg, Pennsylvania, would also seem to be well-prepared. 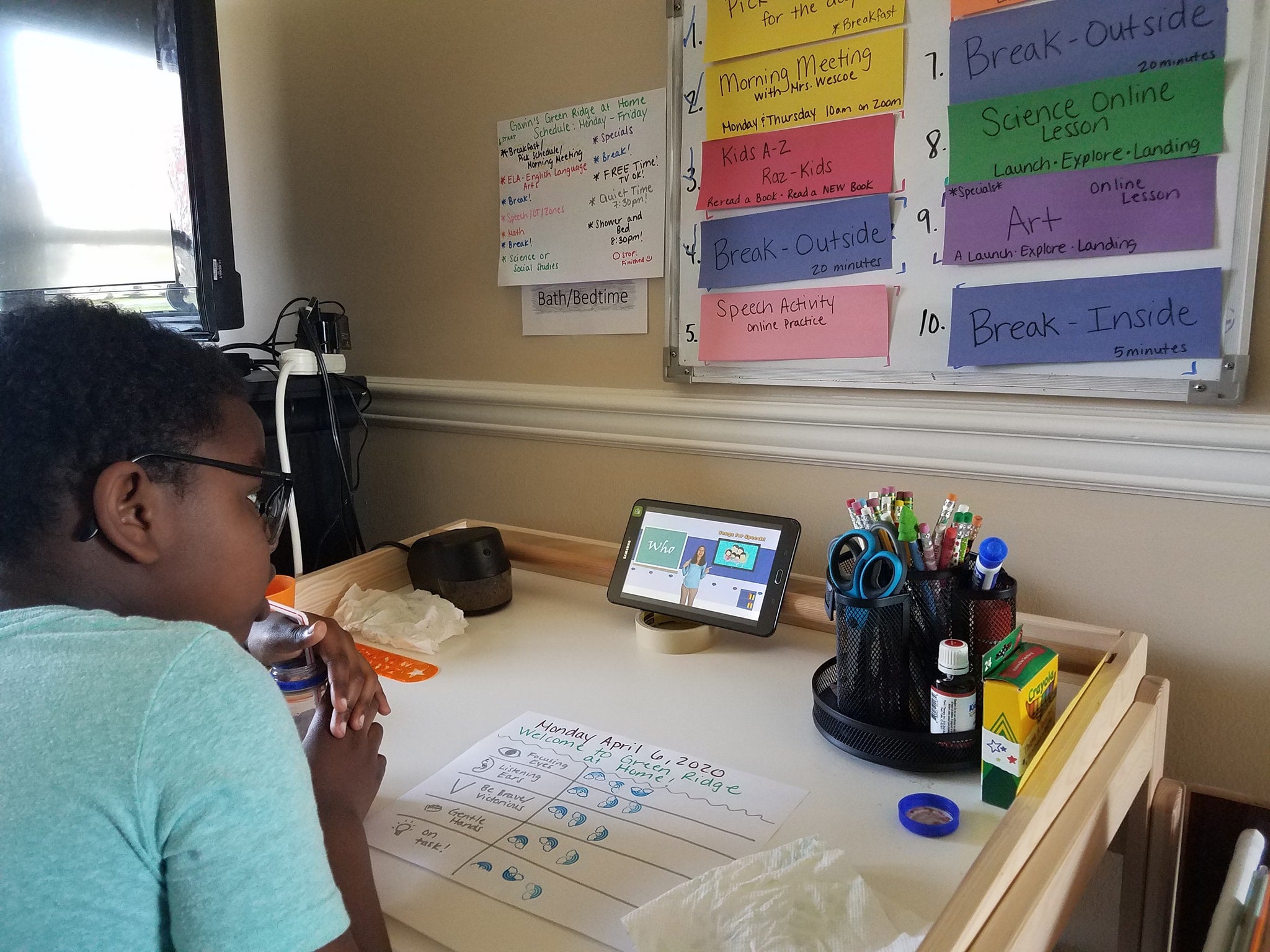 Kim Pinckney-Lewis of Mechanicsburg, Pennsylvania, lays out her son’s schedule every morning on color-coded paper.

A former teacher, Pinckney-Lewis lays out the schedule for her son, Gavin, a first grader with special needs, every morning on colored pieces of construction paper. Red is English; orange is math; blue are his breaks. She previews his video lessons to make sure they aren’t too long and makes notes about when to end them herself if necessary.

And yet despite her background in education, she said, “I have complete and total anxiety.”

“Some days,” she said, “I am so tired by 4 p.m. that it would be really nice for us to play a game right now, but I’m just going to lay on this couch.” 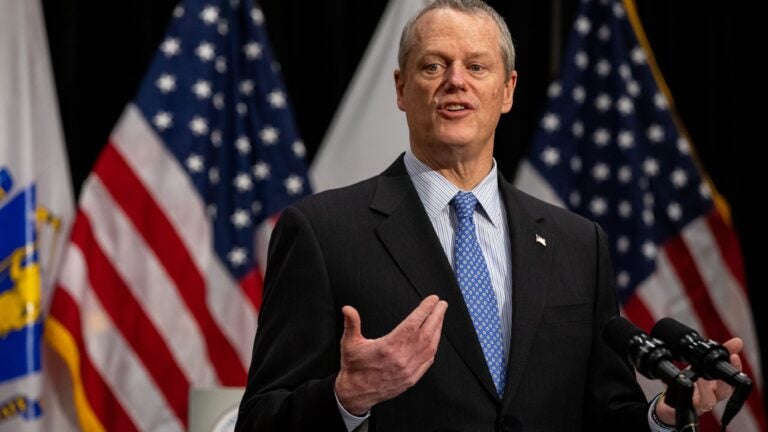