WASHINGTON – President Donald Trump on Wednesday intensified his demand that schools fully reopen this fall, slamming the Centers for Disease Control and Prevention, pressuring it to loosen guidance and threatening to cut funding for schools that do not open.

The CDC was already planning to issue new guidelines for schools in the coming days. But Vice President Mike Pence on Wednesday explicitly tied the effort to Trump’s ire.

“The president said today we just don’t want the guidance to be too tough,” Pence told reporters. “And that’s the reason next week the CDC is going to be issuing a new set of tools.”

Pence, speaking at a briefing of the White House coronavirus task force, was replying to a question about the CDC’s recommendation that students be kept six feet apart to prevent the spread of the novel coronavirus.

School officials across the country have concluded they cannot fully reopen while following that guidance, because classrooms are too small to accommodate all students with the recommended distancing.

The White House is pressing the case that opening school is necessary for students’ academic and social-emotional well-being, and Trump’s allies see a political imperative in convincing Americans that the nation has recovered from the coronavirus crisis.

They’re applying the same pressure to colleges and universities. Trump this week chided Harvard University for offering classes online. And immigration officials on Monday announced rules that would block international students from studying in the United States if they are not taking classes in person. Harvard and the Massachusetts Institute of Technology sued over the rule on Wednesday.

The administration is finding it nearly impossible to control the situation, with the president’s views often at odds with those of his health advisers, and decision-making resting with 50 states, more than 1,300 school districts and thousands of colleges and universities.

On Wednesday, New York City schools, the nation’s largest school system, announced a plan that will have most students in school two days a week and learning from home the other three. Many other systems have announced or are considering similar plans.

Trump did appear to get help this week from Florida, where the administration of Gov. Ron DeSantis, a Republican, ordered all schools to open five days a week. But even there, some superintendents quickly pushed back. Broward County Schools Superintendent Robert Runcie said that he does not see a realistic path to reopening five days a week and that he “will never compromise the health” of students, teachers and staffers. Miami-Dade County Public Schools Superintendent Alberto Carvalho said his district would not reopen until coronavirus rates have been reduced.

Administration officials gave conflicting answers Wednesday as to whether hybrid models like New York’s would satisfy Trump’s call for schools to reopen.

Education Secretary Betsy DeVos said schools “must fully open and they must be fully operational,” and she singled out plans in Fairfax County, Va., for a hybrid system as a failure.

CDC Director Robert Redfield played down Trump’s criticism of the CDC guidelines, saying after the briefing that the two were “totally aligned.”

“We’re both trying to open the schools,” he said.

But he said he is comfortable with different school systems adopting different approaches.

“The advantage of everybody not doing it in the exact same way is you begin to learn what aspects are more effective than others,” he said after the briefing. “There’s no definition of ‘open.’ It can be any variety of how the schools decide to do it.”

He said his agency’s goal is to work with districts to help them overcome challenges and find ways to open their doors.

He also sought to minimize the risks to children of a virus whose worst effects have been seen in older Americans. He noted that children are far less likely to become ill and said there is no evidence that children transmit the virus to others. Other experts say the ability of children to spread the pathogen is unknown.

Since the CDC guidance was issued in mid-May, the number of coronavirus cases has soared, driven by infections in the Sun Belt. On Wednesday, thousands of new cases in Florida and Arizona pushed the total number of confirmed infections in the United States past 3 million, according to data tracked by The Washington Post. The U.S. coronavirus death toll topped 128,000.

At the coronavirus briefing Wednesday, officials took an optimistic tack, saying the situation was improving in some states. And they pressed the administration’s campaign to open school buildings. Pence and other senior officials repeatedly said the CDC guidance should not be used as an excuse to keep schools closed.

“Reopening schools comes with some risk, but there are risks to keeping kids at home, too,” said Health and Human Services Secretary Alex Azar. “At home, kids aren’t benefiting from social stimulation. They may be falling behind in learning … They may not be getting the nutrition that they get at school. And it may be difficult for parents to get back to work” with their children still at home.

But Trump’s dismissal of the agency’s work again raised questions about whether its recommendations would be driven by science or by the president’s preferences.

Four months from Election Day, Trump has also pressed local and state officials to reopen businesses and churches and to lift coronavirus restrictions, seeking to convince Americans that the nation is experiencing a “great American comeback” after the economy and American life slowed sharply this spring.

The president’s allies see his reelection riding on whether Americans see the country as moving past the coronavirus crisis or still mired in it. Schools are a key element: Many parents cannot go back to work if their children are at home. And while there were successes, remote instruction cobbled together in the spring was a disaster in much of the country.

Still, parents are divided, with some eager to get back to normal and others fearful that reopened schools will put their children and families at risk. An ABC News-Ipsos survey last month found about half of parents of children under 18 were willing to send their children to school and about half unwilling.

School officials also are divided. A poll of 1,450 principals released Wednesday by the National Association of Secondary School Principals found just over a third were somewhat or extremely confident in their schools’ or district’s “ability to preserve the health of staff and students as schools physically reopen in the fall.”

Districts also face budget cuts, making it difficult to pay for the supplies and staff they’ll need to keep students and teachers healthy. Meanwhile, many teachers are reluctant to return to the classroom, especially as the number of virus cases continues to rise.

On Tuesday, Trump promised a pressure campaign aimed at opening schools this fall, and on Wednesday, he was true to his word. In a pair of morning tweets, he accused the CDC of issuing “very tough & expensive guidelines for opening schools” and said he disagreed with the advice. Referring to the CDC, he wrote: “they are asking schools to do very impractical things. I will be meeting with them!!!”

He also asserted that schools have opened in other countries without problem and argued that Democrats think that opening them will be politically damaging. He ended with a nebulous threat: “May cut off funding if not open!”

Trump has no power to cut federal funding already allocated to states and districts, but the vice president suggested the administration would seek to tie any future aid to opening of schools.

“As we work with Congress on the next round of state support, we’re going to be looking for ways to give states a strong incentive and an encouragement to kids get back to school,” Pence said.

Democrats agreed that schools should reopen but said Trump was putting politics ahead of safety. “The president is irresponsibly trying to bully schools into reopening, no matter the risk,” said Sen. Patty Murray of Washington, the top Democrat on the Senate Education Committee.

Rep. Robert Scott, D-Va., the chairman of the House Education Committee, accused Trump of “prioritizing politics over the health and safety of students, parents and educators.”

“This move is not only irresponsible, it is dangerous,” he said.

The House has passed a new coronavirus stimulus package that includes $90 billion for education, but it has not advanced in the Republican-controlled Senate.

The Washington Post’s Toluse Olorunnipa and Valerie Strauss contributed to this report. 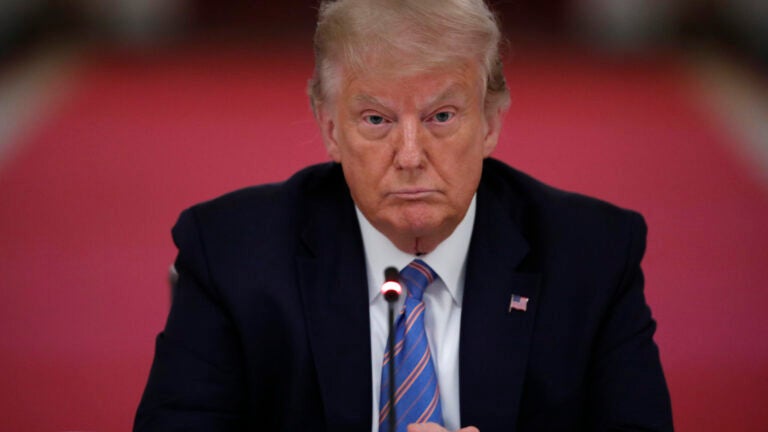